We have now entered phase 2 of Linda’s transformation to the bionic woman.  Thanks to her coming down with a cold the first day of being up in Mayo on phase 1 two weeks ago, the heart surgery had to be pushed a week.  Something about having your chest opened up and having coughing fits seems to be a bad thing.  Once again, we are up in Rochester, but this time the poking and prodding is past and now it’s time to finally get this taken care of.  I know Linda is looking forward to getting this over with so she can get back to running our dogs in agility.  To help cope with the significant amount of downtime involved with this week, most of the spare time since returning home the first time was spent prepping and uploaded images from the image queue – might as well be productive as my body defenses are put to the task fending off whatever still unnamed contagions that will be bombarding me in the community waiting rooms.

Kicking off the Minnesota blogging series is a new bird for the birding list! 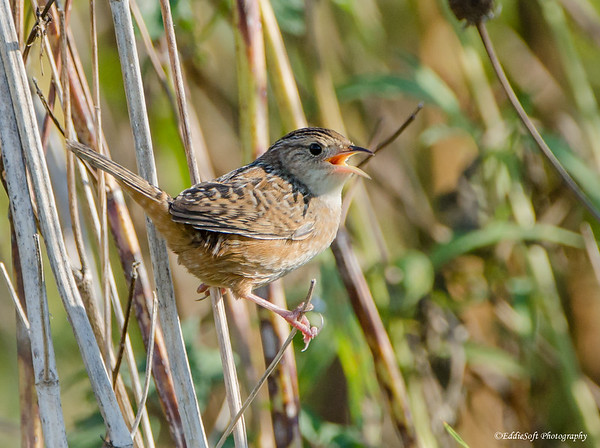 Full disclosure, the true significance of this find was not truly appreciated while out in the field.  In fact, it may have been overlooked if it wasn’t for the blitz of activity int the digital darkroom this week.  A few hours before getting to this little specimen I worked on a set of Marsh Wren shots found during one of our trips to the Texas Gulf Coast.  That Marsh was the second encounter I have had with that species – the first was featured back in October 2017 from a previous visit to Sherburne National Wildlife Refuge (link here).  Ironically a really nice refuge ~2 hrs from where we are right now! 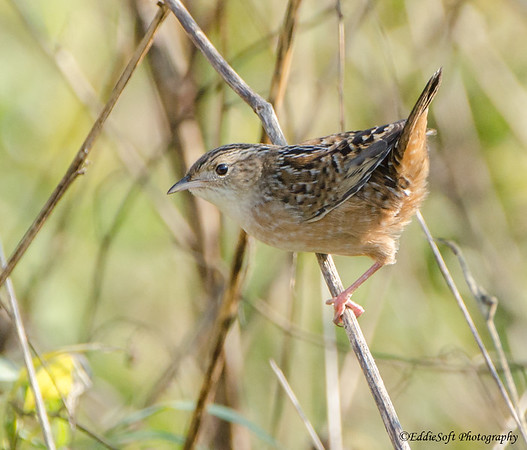 Hit the jump to read more about this cute Wren!

Since I already had that specimen in the tin and officially checked off my birding list, I was dragging my feet in getting the later shots worked up for the blog.  Not wanting to spend hours and hours trying to properly ID all the shorebirds in the queue, opted to get that Marsh series out of the way (that would a foreshadowing for an upcoming post ha).  Verified the key features, striped back, strong eye-brow, classic Wren profile and taken next to a marsh, yep a Marsh Wren, locked and loaded.  Quite  a long lead in to this series, but once that set was done, noticed this series later that night.  Figured I would just work them up and combine it with the Marsh series done earlier. 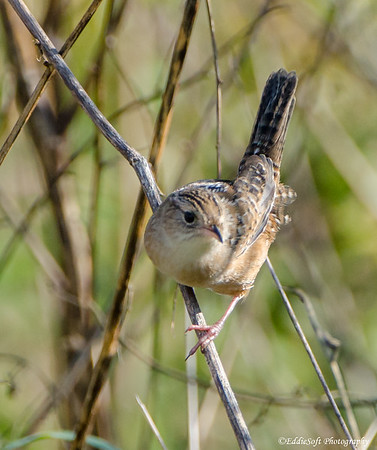 A few images in and something started feeling odd.  It wasn’t the profile as this specimen has the classic long legged, large taloned and tail up look very common in the Wren family.  Not to mention, hyper as hell.  It did have a more subdued eyebrow and, of course, the striped back that originally clued me into the Marsh variety.  Something wasn’t right and it was starting to set off internal warning signs the more images that were processed.  The alarms became overwhelming forcing me to hit the reference books.  That is when it hit me.  The head and the wing coloring was off.  The Marsh sports a pretty solid crown and a solid shoulder.  This specimen has a striped crown and barring that covers the entire wing.  “Holy crap, that’s not a Marsh!!! 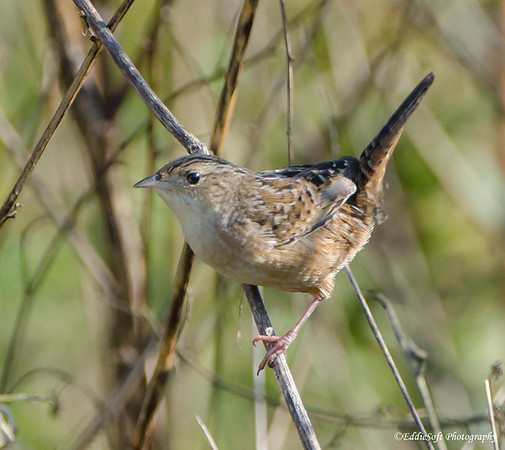 That exclamation was immediately followed with an email to Ron to give him the good news.  Turns out Ron was with me when this specimen was found and thus sure he was able to get the bird in the tin as well (he did have “an event” that cost him a number of images, was just hoping this set was still safe).  Ron and I had spent a ridiculous amount of time trying to get a possible Sedge Wren in the tin at Starved Rock several years back.  Still need to go back and verify that for the record, but without a doubt we had found another one on our trip to Glacial Park Conservation Area back in September 2017.   We were back at a far pond/marsh taking pictures of a Sandhill Crane couple when this Sedge popped out of the reeds behind us.  Sandhill Crane, Marsh Wren we already had, Sandhill Crane, Marsh, Sandhill, Marsh – what to do…okay, get several shots of the Marsh and then get back to the Sandhills.  Had we known at the time it was a Sedge Wren and not a Marsh we would have DEFINITELY left the Sandhill Crane for the +1. 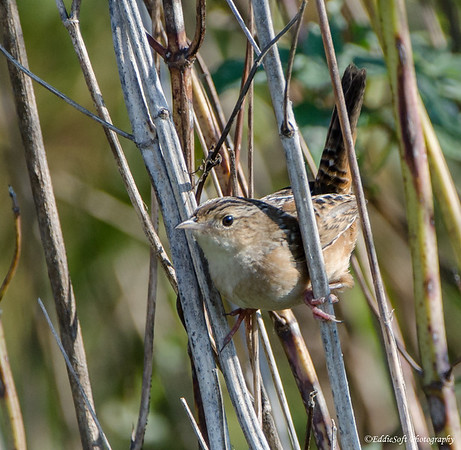 Fingers still crossed Ron still has this in the tin – would be a shame if it’s lost.  I will need to check our birding rules again (link here) to be sure, but since we were both there I believe there is a provision that you can claim the other’s pictures for the +1 in that situation (yes, confirmed, Rule 04 Addendum 2).

Ooops, spent so long on the ID mishap, managed to run out of pictures.  Better get to the interesting facts stat!  Unlike the broad regions of the Marsh, the Sedge is restricted to a vertical band pretty much comprising the Midwest.  And now I know why it has taken this long to get one in the tin.  These little bundles of caffeine are (per Cornell) “nomadic territorial”, which simply translates to being inconsistent in their breeding sites.  A nightmare characteristic for a birder as it pretty much turns into a crap shoot.  Hard enough trying to spot these secretive birds in the brush, much less not even knowing if they bothered to show up that year.

Time to get some shut-eye – Linda’s first surgery is scheduled for tomorrow at 6:15am (outpatient to address frequent nosebleeds – not a good thing when you are on blood thinners).  Wonder if they would just allow me to wheel her hotel bed over to the hospital and let them do the surgery while she is sleeping!?!

Bonus tidbit – while looking up the” bionic woman” learned they never revealed how much she cost to build.  Apparently, they didn’t want to start any gender issues by revealing she was cheaper or more expensive than the 6 million spent on the bionic man.  Who knew?