There are those times you realize you are behind the eight ball and trying to get caught up.  Then there are times when you feel like you’re underwater trying to get above the workload enough to just catch a breadth before going under again.  Then there’s those times when you realize that those times you thought were stressful and overwhelming were comparatively more like a slow stroll through a park.  My life has been more like the latter lately due to some imposed timelines and activities that nearly brought me to my knees.  The good news is I have finally broke through to the park walking stage and doing my best to take a breather before relighting both ends of the candle.  At least all that work filled up the coffers of blog material that will be coming at you over the next several weeks.  For now, I wanted to give some love to the Wildlife side of my blogging efforts. Cannot think of a better way to do that than introducing you to this … 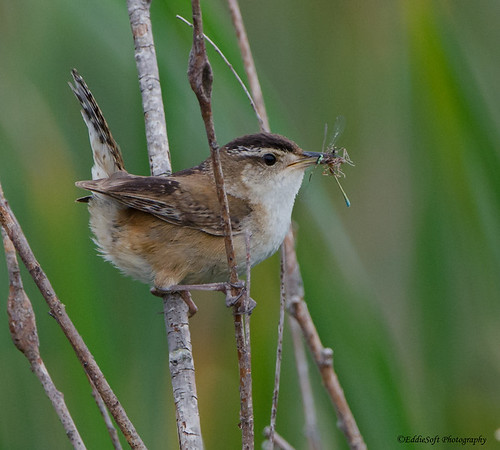 That cute feathered specimen was a pleasant surprise on our recent birding trip to Minnesota.  It is quickly being realized how successful that trip actually was.  If you have been keeping up with my output of words, you have probably come to this same conclusion.  Several of my posts have covered birds that made it into the tin on that trip back in July 2017 at the Sherburne National Wildlife Refuge.  In particular, one of those posts – the Black Tern (link here) is the reason for this find.  While standing by the water’s edge trying to keep the glass on target with the hunting Terns, this specimen decided to pop out of the reeds in front of me.  Possibly to show off its; own hunting abilities. 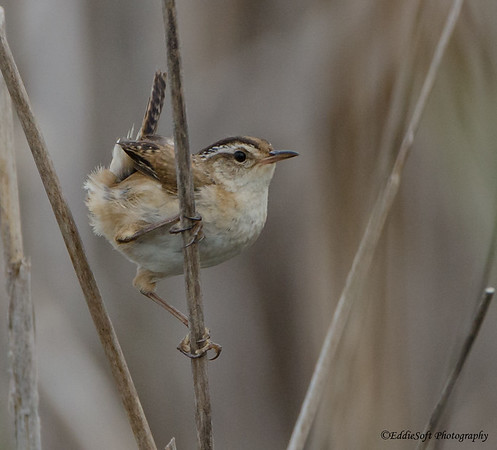 Hit the jump to read and see more about this cute little bird!

If you have a passion for birding, you likely already recognized the upturned tail, the nimble legs and small stature as belonging to the Wren family.  If you are not a birder then I have failed in my prime directive to expand the birding community through this tiny blog – sigh!  Oh well, not giving up.  I try to use birding by impression while out in the field.  Looking at general characteristics coupled with behavior to know where to look and identify the feathered creatures that make it into the tin.  The hyper lifted tail is one of the best ways to quickly get yourself into the Wren family.  Typically around my parts, we entertain ourselves with photographing the Carolina or even more common House Wren.  Those I am really familiar with.  This particular Wren intrigued me immediately.  Unlike those two Wrens, this one was much darker and bolder in its feather coating. 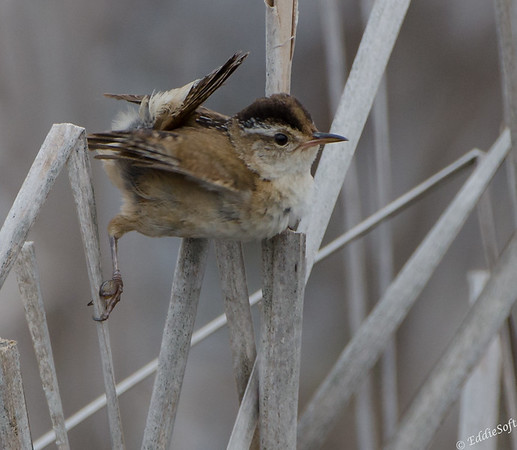 Although lacking a field guide at that moment, my first instincts was a Sedge Wren or Marsh Wren.  Either option had the same effect – forget about the Black Terns waging aerial warfare on the unlucky inhabitants above the pond and instead focus on getting as many shots as possible of this definite +1.  Guess what another easy identifiable trait of a Wren is?  If you said hyper, spastic, caffeine fiend or pain in the ass to photograph you are CORRECT.  Holy cow these birds can drive owners of big glass right to heavy drinking or in my specific case to the weight room to get better at whipping my camera rig from side to side, up and down and every angle in between.  Not only are you trying to keep the glass in the right direction, you also have to fight the focus between the reeds and stalks it calls home. 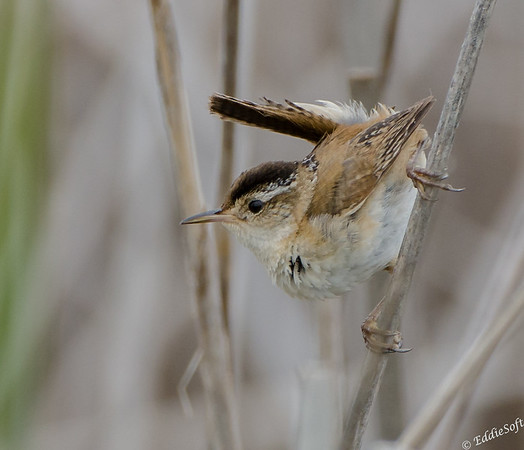 Thankfully we have moved on from the films days.  No excuse not to fill up the card when you encounter a new bird for the list.  That is exactly what I did for the next 30 to 40 minutes.  Wandering back and forth in front of the marsh listening for the chatter, spotting movement and snapping as many as possible when it appeared knowing seconds later it would dive back under cover of the cattails.  Need to give Linda kudos for her willingness to sit in the RV with the dogs while I danced with the devil in the reeds.  With plenty of pictures in the tin, decided to take a few more shots of the Terns and head back.  Once back in the digital darkroom I could set about figuring out the true identity of this intriguing bird.  Again, very bold coloring, well defined white eye line that goes directly into the eye and over. It had a buffy chest and, although not as prevalent in the shot I decided to put in the post, it had a dark patch on the back with small white streaks in it.  My guess was a Marsh Wren.  Decided to grab a few minutes of my brother’s time to confirm which he quickly did.  Admittedly that few minutes turned into a lot o minutes since we started the “Birds my brother doesn’t have” game that prompted me to start pulling out all my Texas birds he doesn’t have hehehe. 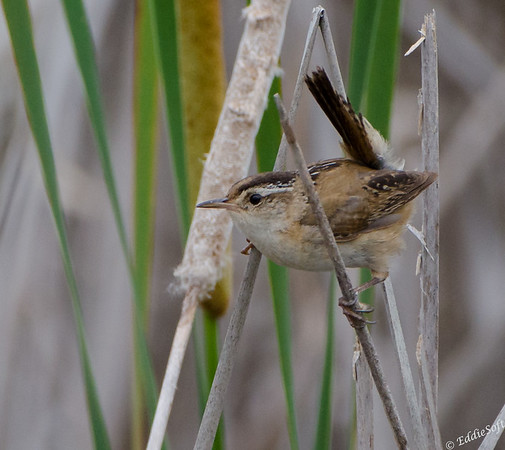 So, a Marsh Wren is now officially in my birding list.  Let’s leave you a little more informed than you came here today.  These birds are commonly found near marshes which likely played into the clever name (ha).  I was shocked to see how prevalent they were in the United States.  The have all of the US covered with spurs going up into Canada and into South America.  With that expanse of homeland you would have thought I would have already found it by now.  They feed on insects and spiders as evident by first shot in this series.  They have a 3-10 clutch size and carry the least concern conservation status (Yeah!).  One other thing Cornell didn’t mention, but clearly experienced in the field. 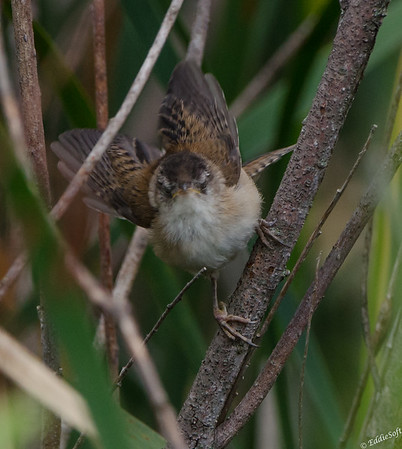 They apparently do not like me pointing the Beast at them.  Now if that isn’t a look of pure evil, not sure I know what it would be.  Imagine being a spider and having that visual staring at you in your 8-12 eyes.  The Reaper has a name and it is the Marsh Wren.

Hope you enjoyed reading about my new addition to my birding list.  Pretty happy with the shots especially considering how hard it was to get.  See you again real soon now!

5 thoughts on “Wren Are You Gonna Stop So I Can Take a Pic?”