Every once in a while I catch a break and it looks like this weekend fits those parameters. As I sit here typing it is raining, as it did the day before that and the day before that and many of the days even ahead of that. Apparently the weather gods didn’t notice our annual outdoor Halloween event had been moved a week out. I can’t imagine what a nightmare it would have been trying to put up and take down all the decorations on the muddy trails – not even sure the ATV could have made it through the pooling water and saturated ground. The wet stuff has made it somewhat inconvenient getting the outdoor pre-work done (mowing, trimming and building the bridge), but the indoor stuff is coming along ahead of schedule… well, except for my self-imposed monthly post quota. One more post to go after this one as the calendar page is beginning to curl up. In honor of the marshy like feel to the trails at the moment, thought it would be appropriate to feature this distinctive Wren. 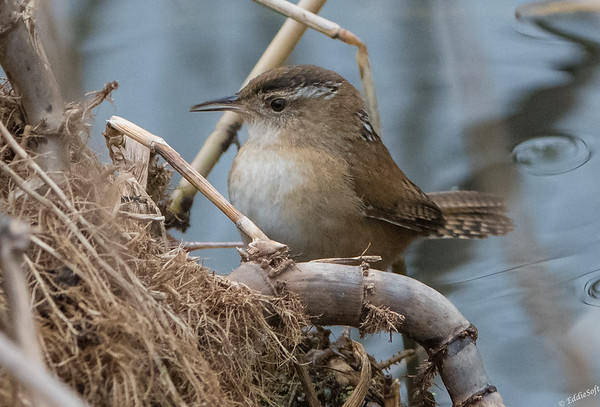 Hit the jump to read and see a bit more about this member of the Wren family!

I actually telegraphed this series of shot while posting on the surprise find of the Sedge Wren discovered at Glacial Park Conservation Area (link here). At the time I mentioned that the Sedge was originally mistaken for a Marsh Wren – and that I had just worked up a series of shots on another specimen. Well, this is, indeed, that series of shots on the Marsh Wren. My apologies for the cluttered shots, this specimen was holding true to their species trait of being overly caffeinated. Trying to get a clear shot of this specimen was putting my arm strength to the test as I was whipping The Beast left, right, up, down and every angle in between. Lose it in the glass, hunt for movement in the reeds, guess where it was going to pop out and then try to get the focus on a brown bird in the middle of a brown setting. Kudos to Linda who waited patiently in the RV while keeping the laughter to a minimum watching my groans in frustration. 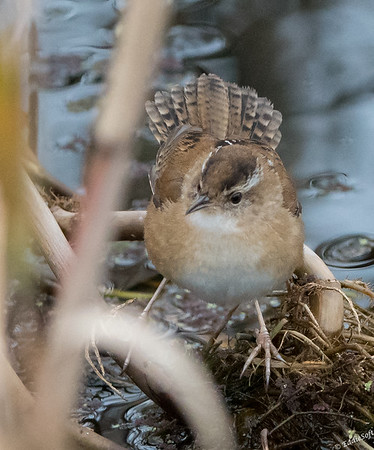 This particular specimen was discovered while birding Anahuac National Wildlife Refuge on the Texas Gulf Coast back in December 2017. This was our second visit to the refuge which once again produced a large amount of fodder for the blog. If you are in the area, we highly recommend stopping in and checking out what they have to offer – you might even find a Zebra (link here)! The Wren was located by luck. I had originally spotted a Sora hunting between the weeds as passed along the backside of the auto-loop. That Sora was responsible for making my arms tired in the first place (link here). Then this Marsh popped out and decided to try and get some of it in the tin as well. Take a few shots, lost it in the reeds, look over and see the Sora pop out, get a few shutter presses in before losing it only to see the Wren finally reveal itself starting the whole process over again – thus the comedy for the audience in the RV.

For those that do not get to spend much time with the Wrens or wanting help in distinguishing them in the field, first look for the bold white eyebrow. If you are able to see that and not on the Pacific Coast, then you can quickly narrow it down to the Marsh, Sedge or the Carolina (Bewick’s’ are more grey). I then look at the wing barring – if there is barring along the entire wing, then that puts it in the Sedge and possibly the Carolina path. Marsh Wrens do not have the barring on the shoulders. Finally, if you can get a glimpse of the back you will see a dark patch at the base of the head with white streaking. That will rule out the Carolina. You can just see that distinction in the shot below. 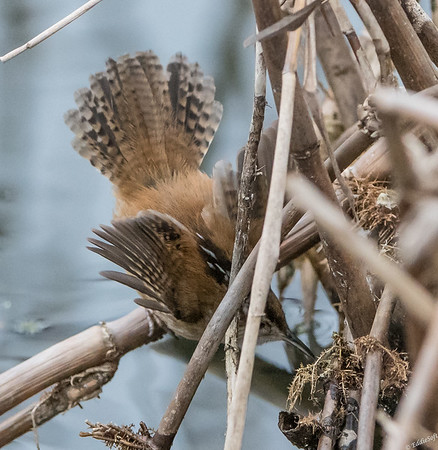 There are other differences, however, some of those are based on sizes which are only helpful when you see the different species side by side. All Wrens tend to hold their tails up high, chatter like crazy and hyper as hell so you should be able to at least get a sighting the Wren family category, then using the field markings noted above should get you to the proper ID. All around a very cute bird – just be prepared to work at it if you want something in the tin especially if you are like me and tend to carry big glass in to the field. Rain might be letting up now allowing me to either get my 50K training run in (that event date it coming waaaay to fast as well) or maybe head out and start reinforcing the new bridge. Either way, looks to be another energy draining day. Will catch you again a bit later and let you know how it is all going!

6 thoughts on “I Call this Workout Marshfit”