So there are times when I’m out in the wild and something out of the ordinary happens. Maybe an unexpected bird decides to come out and pose for me or the light will hit a subject just right to reveal an awesome shot otherwise hidden in an overcast day. There are times when I’ve come face to face with a creature higher on the predator list than I was adequately prepared to deal with and wandered into areas where the daylight’s false sense of security relented to uncomfortable darkness. With all those experiences, I had really never experienced a “what the hell is that” followed quickly by the unsettling thought “where the hell am I !?!” .. that is until last December while on our birding trip down the Texas Gulf Coast. Linda had given me a Texas birding book that we were using to find places we had missed on our previous trips. One of the recommended places was at the end of Smith Point Road near Anahuac National Wildlife Refuge. Since that was a planned stop anyway, we detoured slightly to check it out. 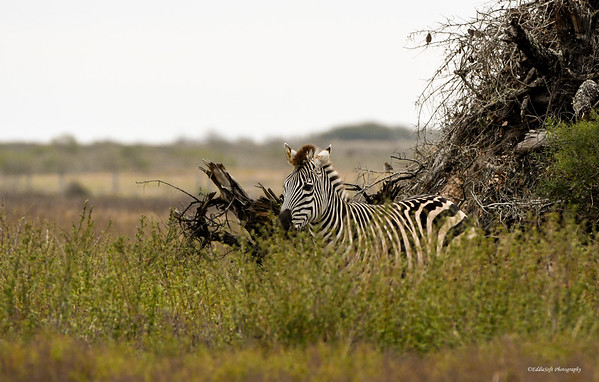 When we arrived, the road that followed shoreline was closed. That literally left us at the end of road right at the waterline. Linda turned the RV around and parked it off the road. I jumped out to see what I could fill the tin with. Not sure if it was the unseasonably cold weather they were having or the generally drab day, but there was very little moving about. Snapped a few shots of a Tern hunting quite a ways off the shore. Three Brown Pelicans then came flying by warranting some attention even though Brown Pelicans in Texas might as well be shooting Bison in Yellowstone – sure it’s exciting for the first 50 encounters, but soon after the thrill subsides. Eventually found myself trying to track a Sparrow through a nearby thicket. It is there I looked up and uttered those alarming words. There in front of me was a Zebra staring right at me. Somewhere Linda had apparently made a very wrong turn – last I checked those black and white beasts preferred the Serengeti, not a field on the Gulf of Texas. Even went over to tell Linda so she could check my sanity.. One thing for sure, this was a lot more interesting to shoot than a Sparrow.

Hit the jump to see a couple more shots of our mysterious friend. 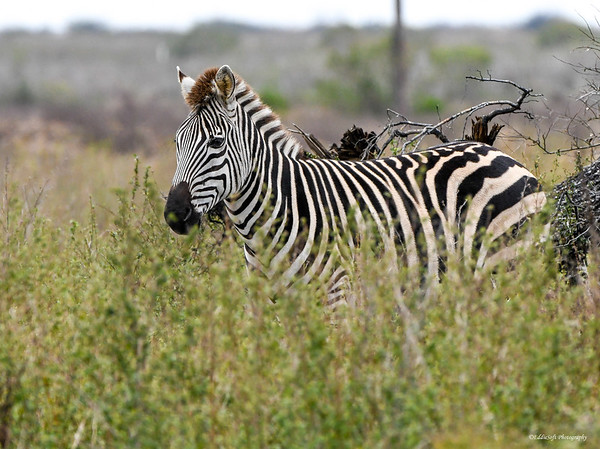 Never did figure out what Mr. or Ms. Monochrome was doing in this field – my guess it wasn’t too pleased with the low temperatures. It must have been used to visitors seeing as it didn’t show much concern I was pointing large glass directly at it. Basically just looked my way to check my position on the other side of the fence and went about a lazy afternoon. I had to laugh to myself in the middle of the shoot. It occurred to me that this species was the true punk rocker of the desert – sporting a mohawk Tim Armstrong would be jealous of.

Zebras are not in my realm of expertise and little did I know before doing a little research that there are multiple species. There’s the Mountain Zebra, Grévy’s Zebra and the Plains Zebra. Based on the large dark patch on the muzzle, my assessment is the Smith Point specimen is of the Plains variety which is also referred to as the Common Zebra due to the broader region it inhabits – funny, Wikipedia didn’t mention it roaming through Texas. Oh, also learned that the stripe pattern on each zebra is unique like fingerprints. Based on that, I think they deserve credit for the invention of the barcode (ha).

After looking at the shot above thought it needed some additional treatment in the digital darkroom. 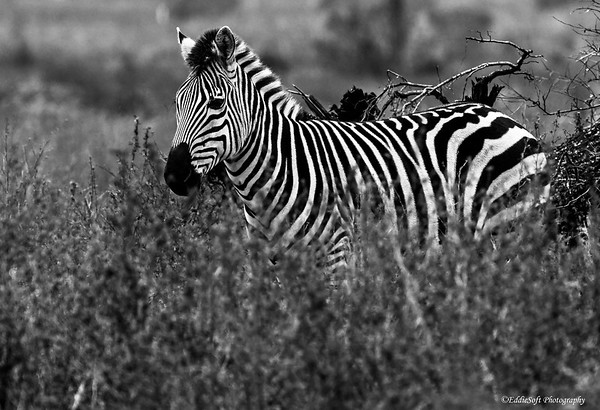 Hope you enjoyed this little tangent from our birding trip. You never know what you are going to find when out in wilderness. This sure expanded my expectations for the future. Stay stripey everyone!