I’m finally back! Been struggling to get time to feed the blog thanks to an incredibly busy schedule. When I am not trying to keep the acreage from getting too far out of control I’m out pounding the asphalt and now dirt trails to prepare for fast approaching races – in between that is honey-do’s about a mile long. Luckily was able to give my other blog a bit of love and posted some recollections of recent races and readings. More disappointing is how far I’ve fallen behind in reading the outputs of my fellow blogging friends. If there was only a way to write and read posts while out on training runs – ha. In an effort to try and right this ship, thought tonight’s post will focus on 10’s of thousands of these… 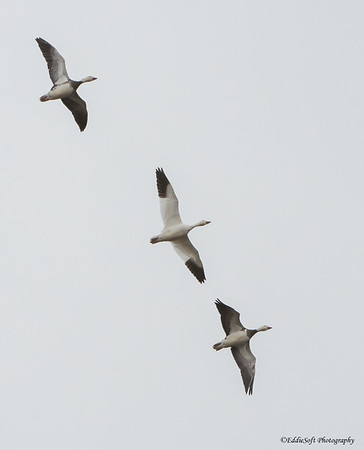 Well, admittedly, that shot doesn’t really give the full effect of the experience. It does give a better view of what made up this huge flock of birds we saw on our trip down to Anahuac National Wildlife Refuge along the Texas Gulf Coast over Christmas break 2017. If you recall, our first unique encounter this year at Anahuac was the Zebra (link here). Kind of hard to really top a creature more commonly seen at the Serengeti National Park than off the Gulf of Texas. However, a close second had to be witnessing one of the largest massing of birds I’ve ever encountered. Apparently those three Snow Geese above have a VERY large number of friends and relatives who flew in for the holidays. 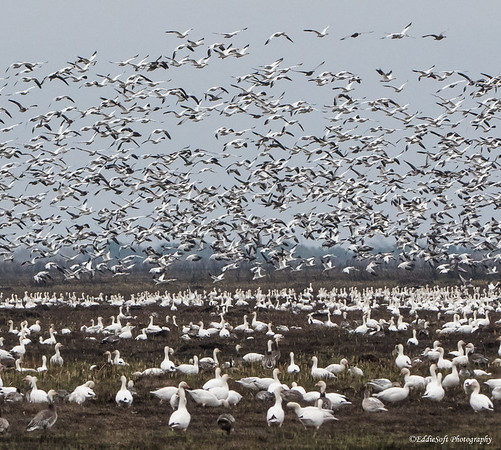 Definitely not an experienced bird counter (or estimator in this particular instance), but comments from the rangers and an article in their refuge flier indicated it was 10’s of thousands strong. Sure felt like even more based on the number on the ground and the numbers that were taking brief flights.

We found this flock at the end of the road that leads into the main part of the park. Last year we skipped going down to this point fearful of the road conditions. Part way down, the road turned into gravel. Getting the larger vehicle stuck would definitely put a damper on the day. This year we asked the ranger at the visitor center if we could make it down there – turns out it is actually a pretty solid base and handled the weight of the vehicle with zero issues. Excited about the chance to explore a new part of the park we headed down to the boat ramp situated at the end of the road. In passing the ranger mentioned that we would see the Snow Geese down there. Since I already had the Snow checked on my list, that initially didn’t generate the enthusiasm it should have. Now if he would have said “that is where you will be able to feel the wing beats of thousands of birds… a whole different story.

When we reached the end of the road, we almost missed them … if you can believe it. We circled near the boat ramp looking for anything interesting that might be in the water. Disappointingly, there was very little out there – definitely nothing worth bring out the Beast for. Now turned around and pointed back out, we noticed a couple out of their car looking out into the field across the road from where were. Now that could be interesting. Sure enough, they were looking at the Snow Geese that had somehow escaped being noticed on our first pass. Might be due to the fact we had traveled from Illinois and the snow white ground was an expected sight being the middle of winter. EXCEPT WE WERE IN TEXAS! In our defense, the weather was exceptionally cold the week we were down there, really only reaching above 50 only once the entire week we were down there. Still not cold enough to explain snow. Not to mention snow doesn’t usually fall up. 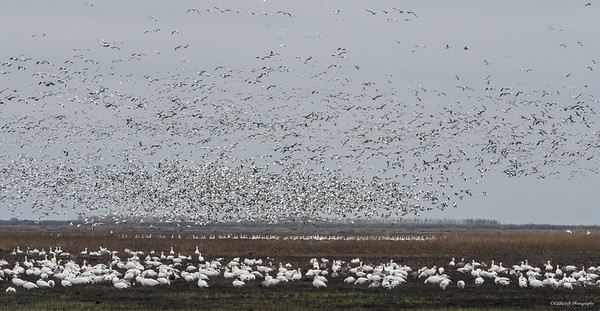 Ended up getting out of the RV and walking over to the side of the field. There I was able to not only see the Geese, but also feel them. At random times sections of the flock would take flight and carry out some spectacular aerial acrobatics and then eventually land back into the field. When they took flight, you could feel the pressure built up from the wing beats – think of your amp turned up to 11. Absolutely amazing. Motioned for Linda to get out of the van to share the experience, but our hand signals were not properly planned out – she ended up staying there, but was able to feel and hear them through the rolled down windows. I now know how it must feel in North Platte, Nebraska when the Sandhill’s launch. Goes to show you, even though you might have that little check mark from a previous encounter with a bird, there’s always something new to discover every time you get the chance to see them in the field. Chalk this up to one of those meetings I’ll never forget.

All I have for you tonight – have to head down to do some core work before catching a few winks. Hang in there, promise I’ll try to be more productive (on the blog) in the coming days