Sometimes adversity results in finding yourself balled up on the floor trying to keep your eyes from floating out of their sockets (so people tell me). Of course, then there are difficult situations that turn out to be opportunities in disguise. Now the latter I have experienced multiple times and that includes this week! I’ve mentioned recently that my days and nights are packed at the moment with work and training devouring the few chances I have to get my posts out. The month was churning away and my quota counter wasn’t moving nearly fast enough. Decided to forego some sleep last night and get back into the digital darkroom and work some images up. At least with the most time consuming part out of the way, I could find smaller chunks of time to get something out there for you. While combing through my image cache, a pleasant surprise greeted me. 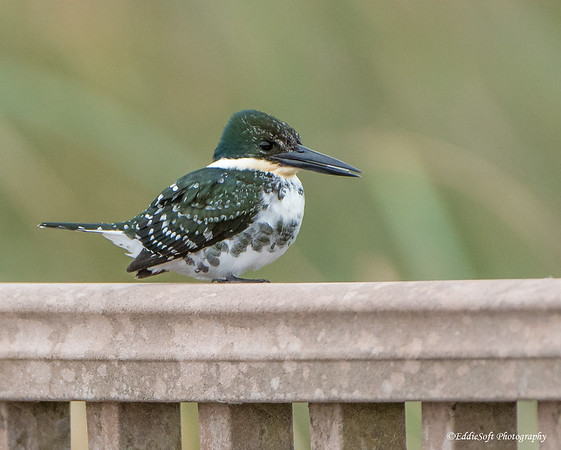 Turns out I had somehow overlooked a number of additional discoveries on our recent Texas trip over the Christmas holidays. One of those discoveries was this beautiful specimen. I think one of the brain fog contributing factors was my Audubon Chapter speech earlier in the year. Most of my blog posts were in preparation for that talk. Must have gotten confused thinking the work up of images for that presentation had already been posted here. A quick search of the blog came up empty – long story short(er), this cool looking Green Kingfisher was inadvertently skipped. So glad this was found, this Kingfisher is one of my favorite finds from the trip to South Padre Island Bird Viewing and Nature Center. 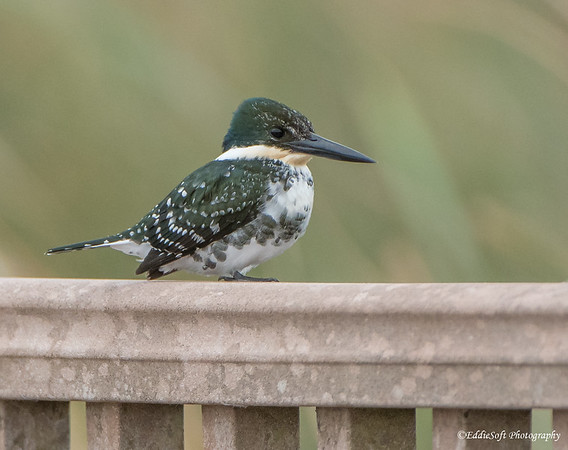 Truth is I almost missed getting this female in the tin. I was walking along the boardwalks at the center trying to take in the multitude of birds that hang out there. An Alligator had made its way to the reeds along the bank which, as you would expect, consumed my attention. Somehow this Kingfisher managed to fly in and perch on the railing behind me. After taking a few thousand shots of the Alligator (ha), I turned back around and my heart skipped a beat. “What is THAT?” Nothing like being visited by a neotropic bird that calls Central and South America home. According to the region maps, it looks like it does venture up into the southern tip of Texas. Another check on my bird list that Ron will need to travel in order to cover – yeah. Unfortunately, Miss Green didn’t stay around very long. Managed to get just a few shots before it took off … for good. She never came back the rest of that day nor was she spotted the following day – and I was definitely hoping to meet her again. Even ended up showing another birder that day the limited pictures that made it into the tin. He was adamant that I was confused with the Belted Kingfisher that was hanging around the other end of the boardwalk – Nope, very familiar with the Belted and had that in the tin from earlier in the day. 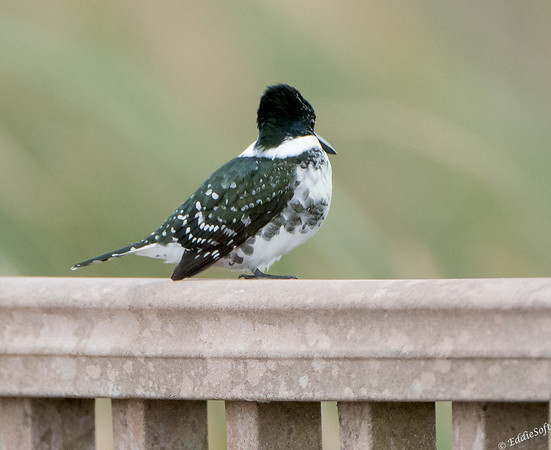 A few quick tidbits before I call it a night. I found it interesting that the male Green Kingfisher is identified by a rufous collar. The Belted Kingfisher is the opposite. In that species, the male is slate blue and white where the female has the rufous coloring (on the sides). Pretty sparse on the cool facts for this bird – about the only other tidbit is they nest in burrows on banks along water – usually only 2-3 inches long and less than a foot above the water. Unlike other Kingfisher species, the Green variety are smart enough to cover their entrances.

Hope you enjoyed today’s featured bird. Definitely one of my favorite takeaways from the Texas Gulf Coast trip. I’ll try my best to be more productive the rest of the month.