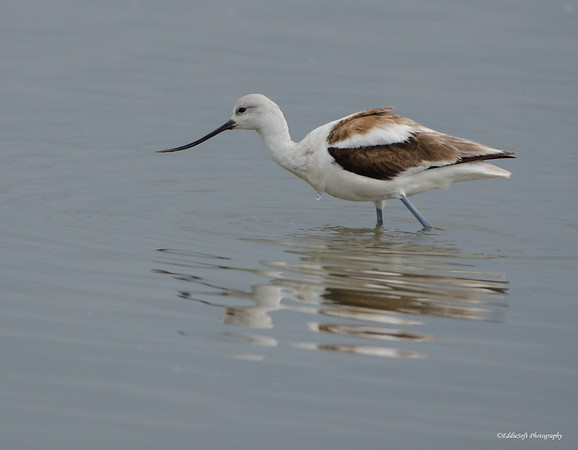 So, did you make a guess or did you simply try to count the number?  If you didn’t and guessed 20, then you, my friend, are worthy of a bird counter… for this particular shot – we’ll check your abilities a bit later.  Let’s get back to the more traditional solo shots. The Avocet … sorry, the American Avocet is one of those species you should have very little trouble identifying if you have had any time near waterways along the coasts or in the western part of the US (with some surges into Canada and Central America. Cornell’s website noted they stop short of Illinois, however, I know for a fact that they have been showing up at our local waterways as well – especially down at Emiquon National Wildlife Refuge.  Said it before, will say it again, Emiquon is a gem  of a birding place – should probably stop talking about it all the time or it will be invaded like some of the other good spots – Starved Rock is basically becoming unusable thanks to Chicago natives abusing it these days. 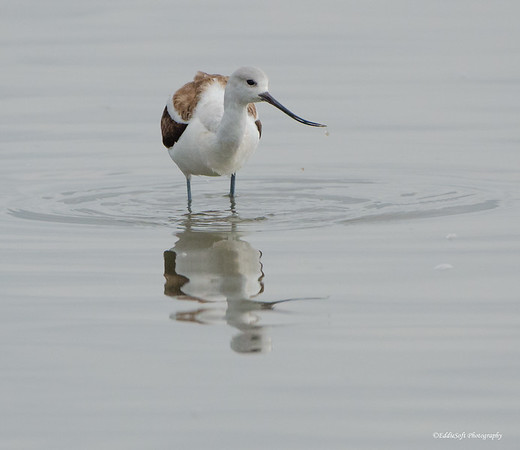 Regardless, if you have had a chance to make into their habitats, they are very distinguishable thanks to their long and upturned …more like a bent… bill.  Add to that their detailed brown black and white feathering and you have a pretty unique entity in the birding world.  This picture along with just about every other picture I have of this species is a non-breeding adult.  You can tell that by the all white head and neck coloring.  During breeding season that area will turn a burnt orange, rusty color.  I wish I could show you that feathering, but I checked with all these shots, all the shots I had from the Texas trip and then double checked with the Nevada shots and they were all in non-breeding plumage.  Will work on that in the future – hate to leave my readers without a thorough perspective of the subject. 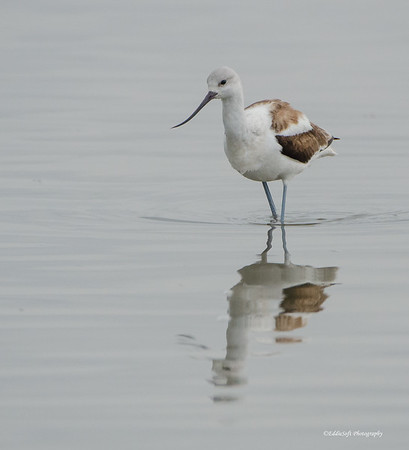 Should be no surprise these Avocets are shallow water probers.  They will stick their bills into the shallow waters along the shoreline and swing from side to side in hopes an unlucky invertebrate will be caught off guard (note for accuracy, will mention they do swim as well).    Learned a couple of new things while checking out Cornell for information to share.  Turns out females have a sharper upturned bill than males.  Again, another trait that can really only be useful when side by side with its counterpart.  Interesting to note though and has some interesting evolutionary quandaries – do they fish differently, are there learning differences on determining what is rock and what is water, perhaps more finely tuned for mortal combat when defending the nest.  Maybe someone can get a government funded research project to investigate further – heard they are giving out money like candy as of late. 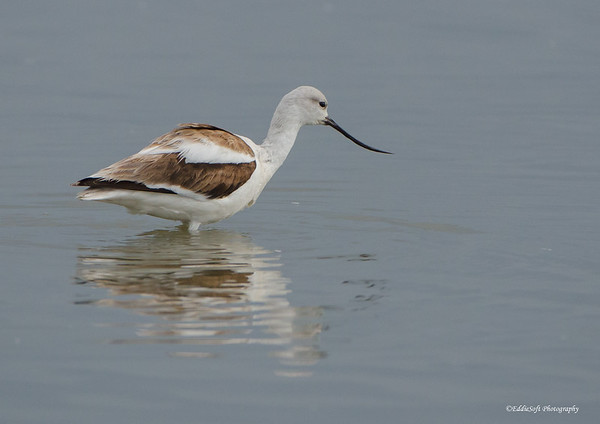 Hey, know what is twice as good as one American Avocet in the water? 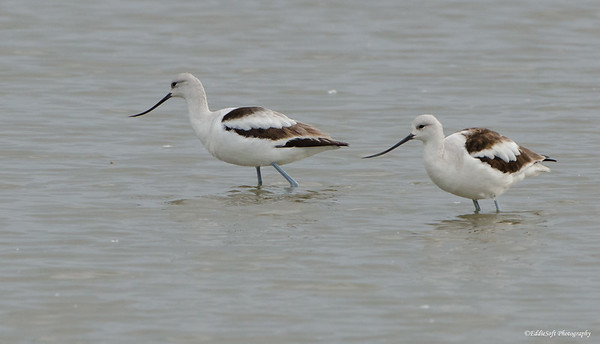 Trick question, answer – two American Avocets in the water.  We are all official bird counters now! hehehehe.  The other new tidbit of knowledge comes on the behavior front.  They apparently shake their foot with each step.  Will definitely have to verify this in the field as I think this is something I would have noticed as I try my best to take as many characteristics in as I can while birding.  Before I get into the quiz part of the post, one final tidbit.  Their offspring are able to defend themselves and leave the nest after a mere 24 hours.  Have a baby shower, schooling, get a driver’s license, interview for their first job and next thing you know it’s been like 10 hrs.

Okay, get your bird counting hat on – close your eyes, open them at the next picture and then close again a minute later – go!

Don’t worry about the various species, what count are you going with for at least the ones in the forefront?   Imagine if you will me being excited at the 10 or so Avocets that were hanging out near the breakwall on the Bolivar Peninsula near Galveston Island, Texas – that is where these shots were taken back in January 2017 by the way.  There I sat snapping shot after shot in case something scared them away.  Eventually looked up and started noticing there were a couple more in this flock.

Okay, next test, close eyes, open them, stare at next picture for a minute and then close..

A little harder?  for sure.  For the record I am basically amazed at how well some people can do this.

Hoping you noticed the odd arrangement.  It’s as if the White Pelicans are holding court over their minions – which by the way are ALL American Avocets.  Suddenly those 10 I was spending so much time with didn’t seem to matter that much anymore thanks to Avocet sensory overload.  Apparently holding a national convention of sorts or the Parrotheads were in to see Jimmy Buffet play.  I’ll spare you further count exercises, but this was by far the most Avocets if not the largest gathering of a single species outside of a Snow Geese gathering (link here), that I have ever witnessed.

That wasn’t the only sandbar they were sitting on either – behind the Pelican court there were at least two more bars that were packed wing to wing with Avocets with a few other species randomly thrown in.

Quiet the experience for sure, at least once we got to the breakerwall.  The area getting into it wasn’t exactly the best.  Run down houses, trash everywhere, interesting people hanging about.  I was not exactly comfortable leaving Linda in the RV alone, but she remained in eyesight from the wall and she had plenty of protection with her should the need arise which ended up being an unwarranted concern for at least the time we were there. 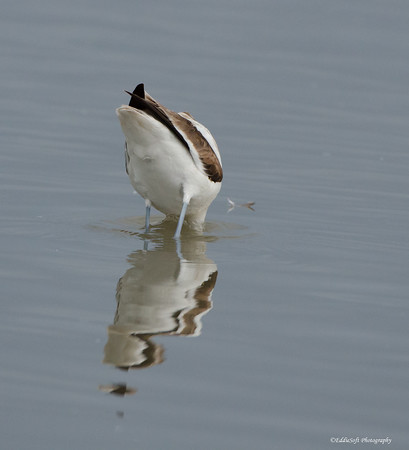 Hope you enjoyed the shots of a fine American (named) bird.  Type ya’ again real soon you all!

4 thoughts on “An All American Bird”