Greetings from the northern state of Minnesota.  Should not be a surprise by now, but we are up at Mayo getting Linda’s heart a slight rebuild to take care of a birth defect.  I am going to spare you the details, but the good news is the new valve is officially in and functioning.  There have been some unexpected events and side effects that the doctors are currently working to resolve.  Hoping Linda will be back on her feet soon and checking the Iron Man off her bucket list… okay, that last part might not be true, she leaves the running to me.  Her attitude is good and I know the thought of being able to run her dogs in agility again is keeping her drive up.  To help pass the time and give a bit of relief on the stressometer,  thought I’d go ahead and see if I could get a post out.  Let me introduce you to my little friend. 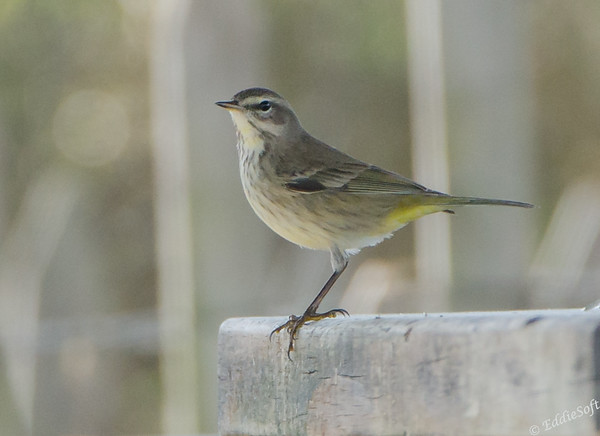 Pretty stoic looking if you ask me.  This somewhat overall dullish looking bird with the yellow butt happens to be a Warbler.   Now Warblers are known for being pretty flamboyant especially in the Spring or breeding plumage. It just happens this particular Warbler is one of the more ornate ones out there.  Imagine that yellow coloring on the under feather washing through the belly and shooting highlights to the back of the head where the white highlights are shown on this specimen.  Now add to that a bright rusty colored cap and you have yourself one “purdy” bird.  The truth is I have shots of this bird in its breeding plumage thanks to a trip to Montrose with my brother Ron.  We are still trying to get those pictures properly ID’d  so I can start posting those … and racking up the +1’s.  Hey Ron, let’s get that done, my peeps are waiting! 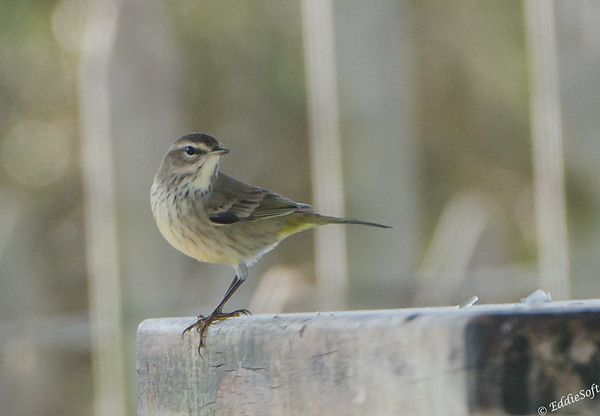 Hit the jump to see a few more shots of this colorful Warbler disguised for the off-season.

Fortunately, I did have this specimen all worked up in the digital darkroom and prepped for tonight’s post – so officially taking the check mark on this non-breeding variety of the Palm Warbler.  I promise the more colorful plumage will be featured as soon as the Montrose haul is properly assessed.  The Palm Warbler is pretty much resident only in the eastern half of the US, but does push more west in the Canada regions.  This one was spotted at Galveston Island State Park back in January 2017.

That puts this sighting at the western edge of the southern region.  The fact that it has a whitish belly identifies it as the Western species variety of the Palm Warbler.  As their range shifts eastward, the white belly is replaced by a brighter yellow tone.  To make sure you are properly prepared for any quizzes or Mensa tests, that would be the Western variety of the Palm Warbler which ranges on the eastern US – got that? Admittedly as confusing as hell.  The Palm is rather large for a Warbler.  They have legs a model would kill for and ordained with a wicked set of talons sure to put absolute fear in any juicy Beetles or Caterpillars that happen to cross its path.  In agreement with Cornell, this bird definitely had the feel of a Pipit vs a Warbler and that threw me at first when trying to properly ID it.  Ron had gifted me an incredible book on Warblers that ended up cracking the code. 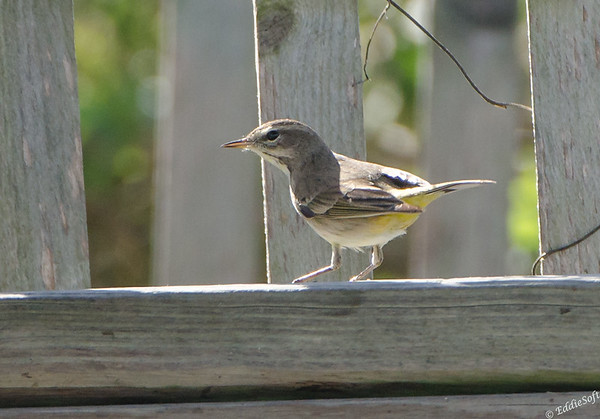 This find was a bit of a surprise.  My attention was primarily focused on shorebirds as that is the draw to the Texas Gulf Coast when it comes to birding (at least for me).  Once all of those were in the tin, spent a significant amount of time trying to catch the hunting Brown Pelicans dive-bombing the surf for unsuspecting prey.  Comfortable with the captures started walking back to the RV when a flash of yellow whipped by and landed on a fish cleaning station some distance away.  Wasn’t about to pass up an invitation like that.  Got The Beast trained on it at full extent to cover the extra distance to get some starter shots before applying the foot zoom.  Thank god I remembered one of my golden rules about getting something in the tin and THEN trying to improve on it.  Three steps into the pursuit and the Palm was gone in a (yellow) flash.  As a result, these shots are highly cropped, but at least they made it into the tin.

Let me check what kinds of interesting facts I can pass along about are large Warbler.  Wow, that is some weak stuff Cornell.  They did indicate the are primarily ground foragers and they are one of the Northernmost breeding Warblers second only to the Blackpoll – which I heard has a nasty habit of holding this over the Palm whenever they meet up at Warbler cookouts (followed by the Palm telling it to kiss it’s yellow butt…. speaking of… 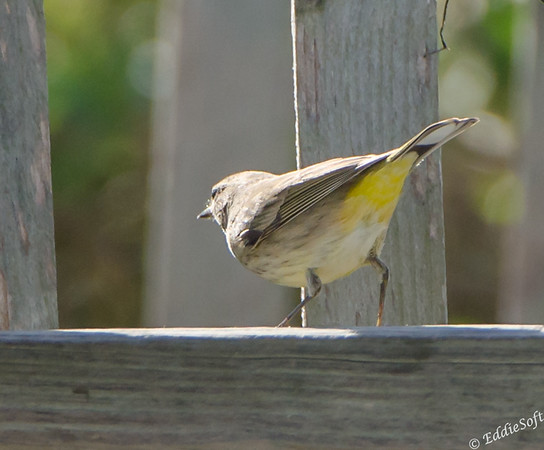 That will bring us to the end of tonight’s post.  Just noticed I forgot to mention the key characteristic that helped seal the ID.  Notice the white patches on the outer tail feathers.  Thankfully, the Warbler book had undertail shots of every Warbler – supper handy feature.

Stay healthy everyone or find your way to Mayo – incredibly talented people up here that are taking great care of Linda.

3 thoughts on “A Dull Palm”