2015 is on its last hours.  The sun is retreating for the last time in 2015 making way for a night of celebration as we bring in 2016.  All things considered, I will not miss this year very much and more than relieved to let this year go thanks to a myriad of tough times from family medical discoveries, work stress and the loss of our beloved Kerby.  There were some bright spots like the running production, additions to the bird count and a number of projects I’ve shared throughout the course of the year which will likely be touched up on in my year in review post.  Thought I’d close out this year with a topic I set up from the last post.  Babies! 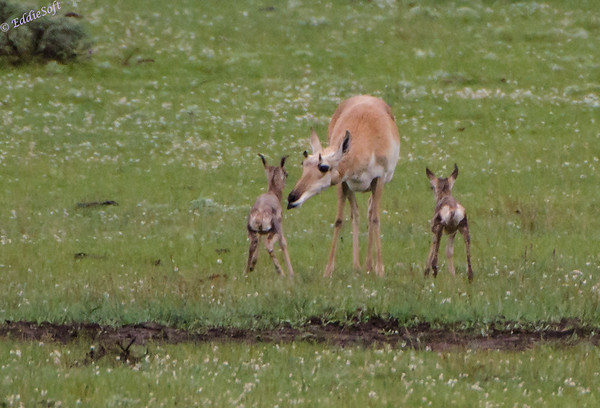 The Buffalo young carry with them a certain amount of … ummm let’s go with size.  That size gives them a definite advantage in the endless struggle for survival in the wild.  That also means they are surrounded by even larger mothers and fathers capable of inflicting serious paybacks should any predator decide to test their skills.  This is a stark contrast to the life of a Pronghorn. 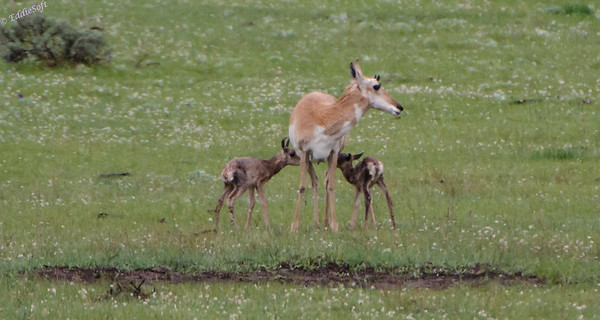 Hit the jump to see more pictures of the Pronghorn doe and her two cute newborns.

The baby Pronghorn pictured here are likely very new additions to the family.  They mate in mid-September and have a 7-8 month gestation period.  The fact we spotted them in May indicates they at most they are a week or two old – likely less.  Unlike the Bison, the Pronghorn newborns weigh in at a paltry 4 to 8 pounds.  No match for the Wolves, Bears and Coyotes that roam the Yellowstone kill zones.  From a protection perspective, their parents have to rely on speed, cunning and outright alertness to counter the numerous dangers that surround them.  In case you are wondering the Pronghorn is tops on the speed scale in the Western Hemisphere ranging in the 35mph for extended distances and up to 55mph for short jaunts (<.5 mile).

This ever-watchful doe spent the entire time on guard – keeping an eye to the West. 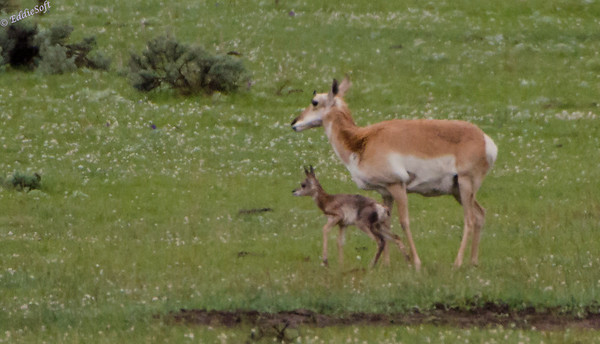 Eyes on the North

Eyes on the East 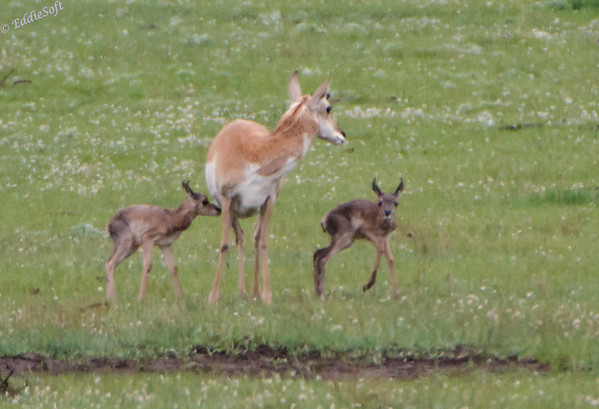 … and eyes on the South.  All while her twins were either taking nourishment or enjoying the many sights and sounds of their new environment. 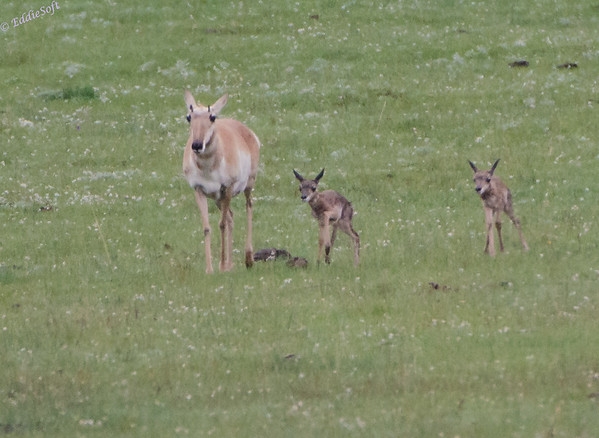 As far as the mom goes, she was intent on giving her babies the best chance of survival in a hostile environment.  For the most part she let them run and explore as long as they stayed within her safe zone.  The second one of those two babies decided to test their boundaries, she let them know immediately this was unacceptable and either called them back or narrowed the gap herself. 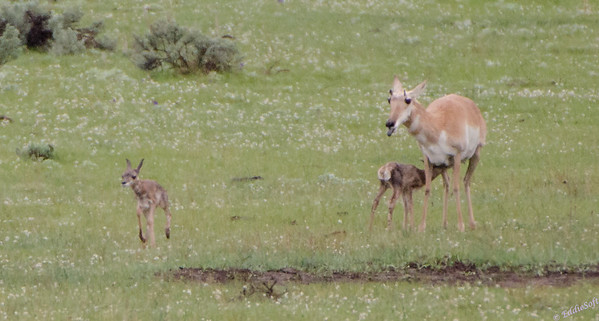 According to our friends over at Wikipedia, fawns interact with their mothers for only 20 to 25 minutes a day.  We were lucky enough to get to witness this infrequent interaction and even get a few pictures.  This is one of those few times when I will not apologize for the softness resulting from having the tele on the Beast.  Don’t get me wrong, they are definitely soft, but if I didn’t have the extender on … there wouldn’t be any shots to post.  This family was spotted a looooong way off in the Yellowstone meadows.  The fact you can make out any shapes at all is a Festivus miracle.  Even with the extra reach I still had to digital crop down to a small portion of the shot to get them sized enough for you to see what was going on!

Eventually, one of the fawns spotted our location.

This observation was duly noted by the doe who made her own assessment of the situation.

Understandably so, she decided it was best to error on the side of caution and quickly collected her children and pointed them in the direction of safety. 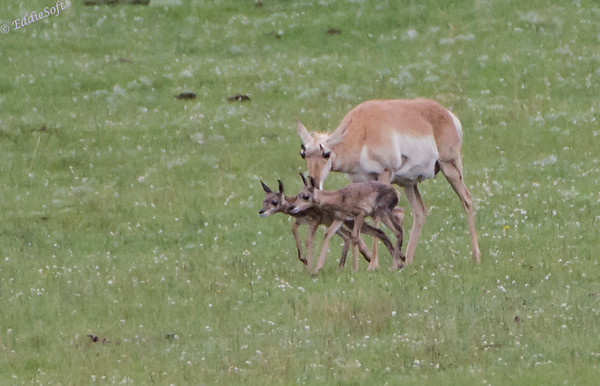 Like well disciplined kids, they heeded their mom’s directions and went about making a quick escape from the potential danger.  If I could only tell them they had nothing to worry from us – it wasn’t like they were moles or something vile like that – nope, just precious fawns with zero interest in ripping up my yard.

By the way, I forgot to mention the best defense these babies have to thwart the perils that await them.  They have a natural camouflage that allows them to blend into their surroundings.  Humans have the ability to discern small differences and can likely spot the fawn below much easier than one of their natural predators could.

If wolves or coyotes are anything like my poodles they probably can’t tell them at all without them moving against the background – rabbits continually point out this canine flaw in our front yard as they’ll just sit there and stare at my dogs and neither of them will detect they are there.  I didn’t find it in the research materials, but somewhere I had picked up that fawns are fairly scent free which would make it even more difficult to locate.

Well, this is the last post of the year.  I’ll save you the math and let you know I met my monthly quota for another year.  I truly appreciate all the time my readers spend on my blog and even taking the time to add your thoughts and comments.  Have a happy and SAFE new year.

2 thoughts on “The Young and the Vulnerable”