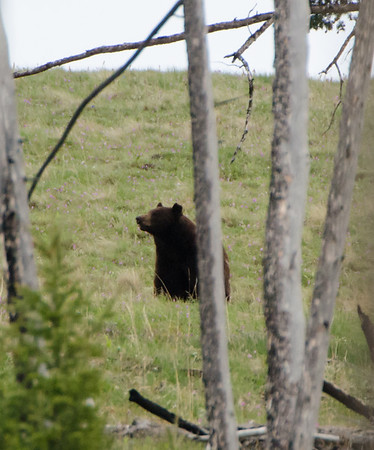 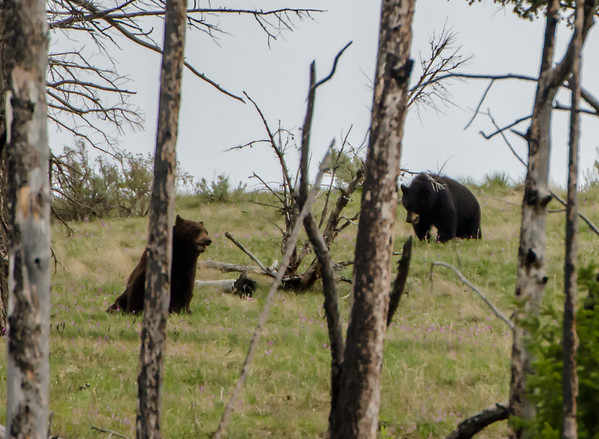 At first you might assess the situation as the arrival of her mate.  If so, then your inclination is, unfortunately, wrong.  That was not her mate, but rather an unwelcome intruder.  We were with the Makuta’s when we noticed a large group of cars pulled off in a viewing area and more scattered alongside the road.  If you know anything about Yellowstone, then  you know this is a sure sign there is something worth photographing in the area.  We pulled off and quickly confirmed our theory.  This is when we learned details of the situation from a helpful observer.  That cinnamon was in full on protection mode for her offspring (from a mating with another male).  She was doing her best to make sure the new danger didn’t attempt to climb any of the trees in that holler.

Why you ask? (hopefully you asked… I would have asked).  Turns out the mother had successfully managed to get her twins to safety.  For a bear, safety means up high in a tree.

Yep, her twins were doing their best to keep their distance from a brutal reality in the wildlife domain.  There are no laws about killing children in the animal kingdom and sometimes the predator isn’t always another species.  As we learned from the other observer, the new male wanted to mate with the female, but as long as her offspring from the other male were still around – it wasn’t going to happen (believe the female would not allow it).  So, his goal was to kill her cubs so she would be willing to mate with him to replace her loss. It’s a brutal world out there.   The good news is the cubs were both safe the entire time we were observing and heard that the male eventually gave up and went elsewhere.  We never actually saw the cubs get out of those trees – kudos to the mother for successfully preventing them from getting brutalized by a familiar enemy.  As an FYI, it is the babies we spotted first as large splotches among the branches.  Then we noticed the drama unfolding on the ground.

As a bonus, thought this would be a good time to feature another set of bear shots that, ummmm.. let’s just say might make for some interesting conversation if there were children around.

We came upon these two frisky Black Bears at some point on our trip.  These two decided to act out a Viagra commercial out in a Yellowstone meadow.  Keep in mind these two bears were once again at the extent of my glass – the Beast with the 1.4 tele.  As is typically the case, that softened the shots, but without it, they’d be two dark spots in a field.

Luckily, the combo was able to capture enough detail to let you know what was going on … cue in the boom chica boom background music hehehe.  We were up on a burn while taking these shots along with a number of other onlookers.  The people next to us had a young – possibly a grade school kid.  That kid had not had “The Talk” yet and busy querying the parents for an explanation of what they were “doing”.

I believe the answer was “playing” or “hugging” – Linda may remember better.  I do remember laughing uncontrollably on the inside watching them struggle to give a description that didn’t enter the danger zone.  There was some self-relief that Linda and I would not have to experience that awkward situation. 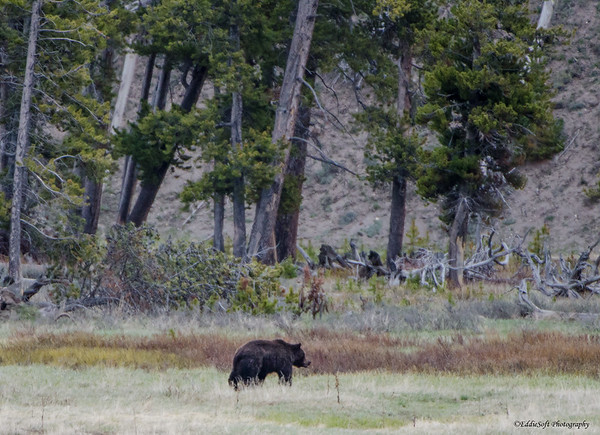 Eventually they rolled over and smoked a few cigarettes, snuggled for a bit and basked in the afterglow from the miracle of life.  Actually, that is a bit of imagination – the female took off without looking back and the male meandered away in a different direction.  No hanging out in a claw-foot bathtub watching the sunset for these two Ursa Americanus.  As a note, these were number 2 and number 3 from a size perspective of all the bears we witnessed that trip.  The largest will be showing up here soon.