For starters, I now have two new unexpected benefits of the pandemic today.  Ever have one of those situations when the perfect song comes on, your toes start tapping seemingly without your brain prompting it and all of a sudden you find yourself singing along OUT LOUD?  Once you come to your senses, you start looking around and notice pairs of eyes staring at you, judging you, finding you wanting.  Sheepishly you look away hoping your fifty shades of red don’t show up on the Internet.  Guess what, as long as the music and ambient sounds are above your vocal cord vibrations – let it rip – no one will know what is going on behind that mask – quite liberating if you ask me.  Oh, and the other side effect is you are no longer required to force a smile for selfies.  Just keep your eyes open and send the Kilroy impersonation to all your messaging friends.

Now for a quick apology.  In the last post I alluded to a two parter for the Eagle shot progression.  Turns out, I should have referred to it as a three parter.  Decided not to burn up your image cache and hold back a series for another day.  Hope you like our national bird as you will be getting your fill of them for sure. 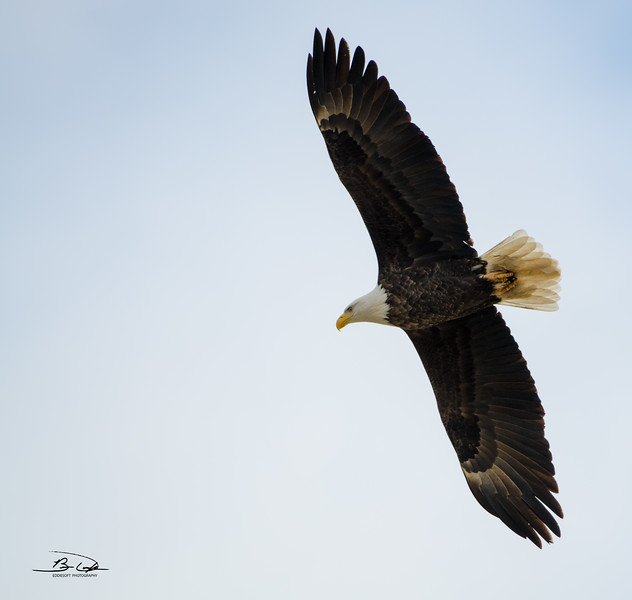 Continuing on from the last post, I was commenting on the number of standard Eagle shots I’ve collected over the years.  Overwhelming to be honest, but I enjoy these mighty creatures and find myself snapping away whenever we encounter them.  In the last post I showcased the more traditional shots. 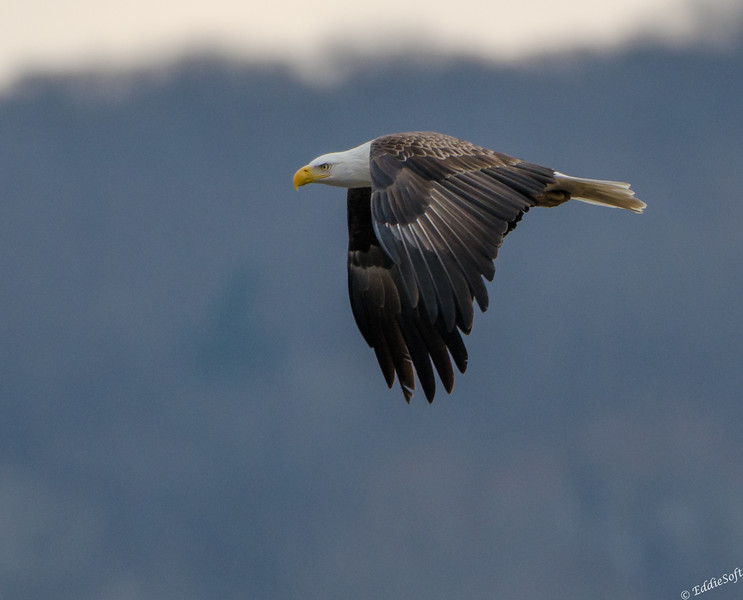 Hit the jump to see some more offerings from the Eagle folder.

Today, I wanted to focus on some alternative perspectives.  A change of pace if you will.  Tried to parse through my folder looking for images that fit this category.  In contrast to the standard soar picture as in the first shot, the shot above has the wings in the down arc.  Didn’t really notice in the field how the white highlights on the wings look like rays emanating from the bright white head 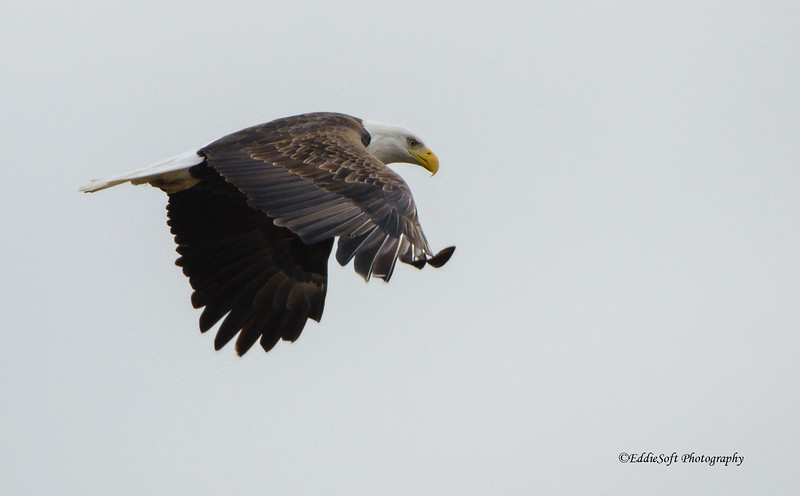 The next one added a bit of tip flair to the downed wings.  Pretty sure it was demonstrating jazz hands.. the royal wave or flipping me off, not sure which.  All seem to be forms of blatant mocking of my photography skills. 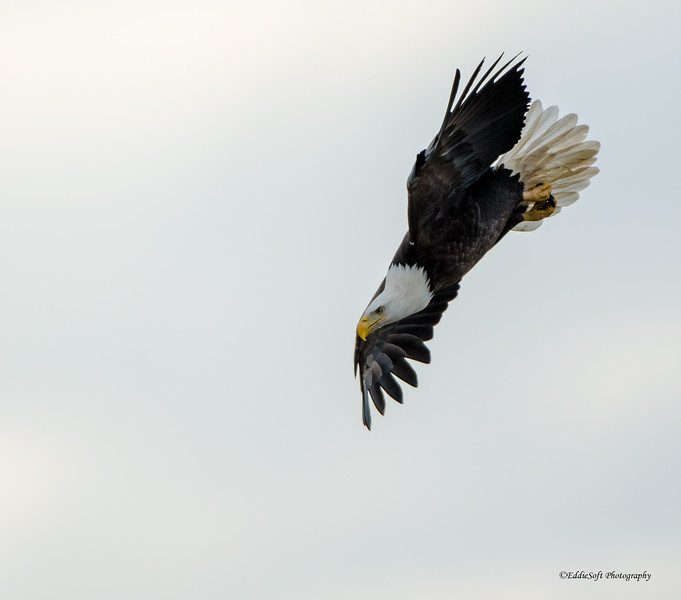 The shot above is probably my favorite of the flight shots.  Emits a strong, aggressive feel that fits this top tier bird.  Intent on its mission and streamlined to get it done.  It didn’t hit me until in the digital darkroom that this specimen already had a kill in its feet – was probably trying to evade the other Eagles in the area to keep his prize from being stolen. 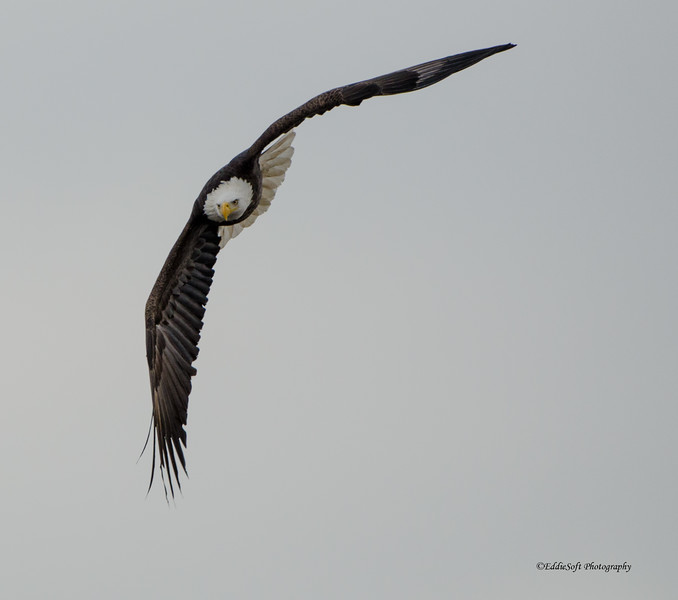 Above is another interesting angle for your viewing pleasure.  Puling a high ‘G’ bank as it tracks potential dinner swimming below, oblivious to the razor tipped feet heading its way.  Speaking of feet… 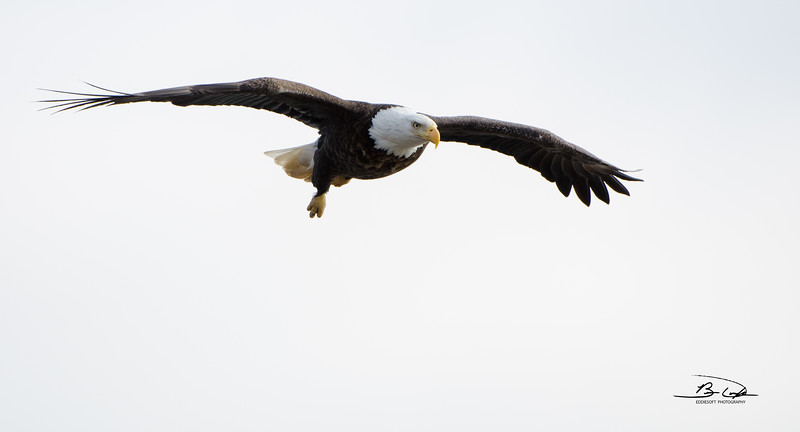 Our feathered friend was circling the waters with its weapons on display – correction – weapon singular as if to taunt its prey.  The image has that highly dimensional look – left to right plane with the wings, back to front with the tail/head plane and then the up down vector (If you spent a lot of time in 3D solid modeling like I did, you probably just mimicked the Right-Hand Rule with your two fingers and thumb)

What is better than one weapon on display – you guessed it – BOTH weapons out and ready for battle.  Guessing this is the last thing that imprints on the fish’s brain as it is being hauled out of the water. 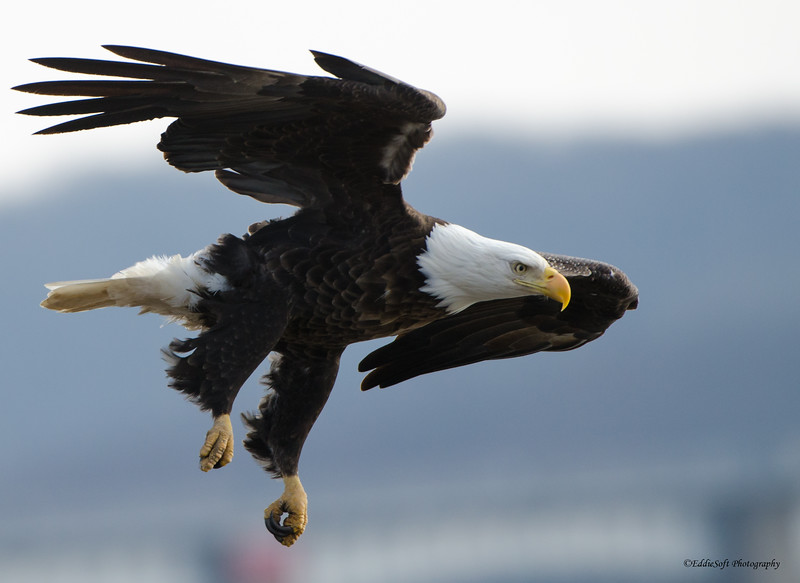 Clearly these shots fell in the “interesting” perspective category.  Felt a little intimidated just processing the shots. It happens so fast in the field you really do not have enough time to really appreciate their technique as they make their kill runs. 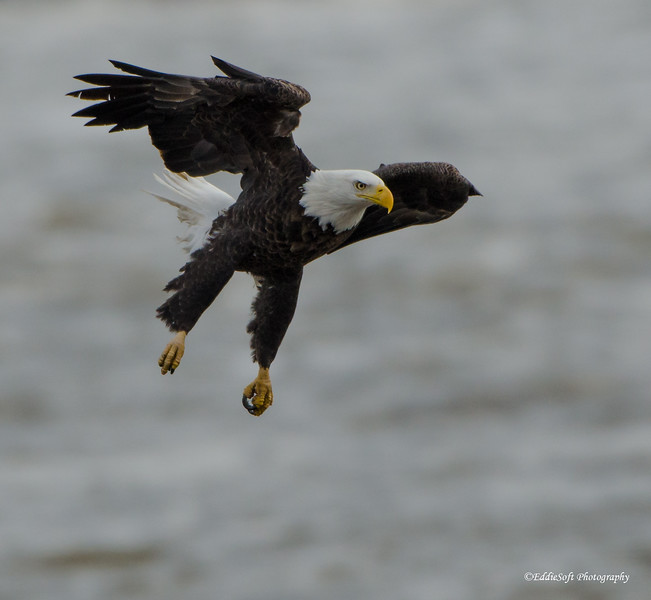 Once the legs are down, they will bring them up into strike position – feet cocked at a 45 degree angle with talons in maximum snatch position (hint, those are the shots that are coming in part three of this series).

Let’s not leave out the immatures.  The following specimen is still undergoing the transformation to the mature feathering – takes them 3-4 years to really develop the white head dark feathering.  Don’t let the immature moniker confuse you – they are just as deadly as their older colleagues, it just might take them a couple of extra passes before getting talons onto scales 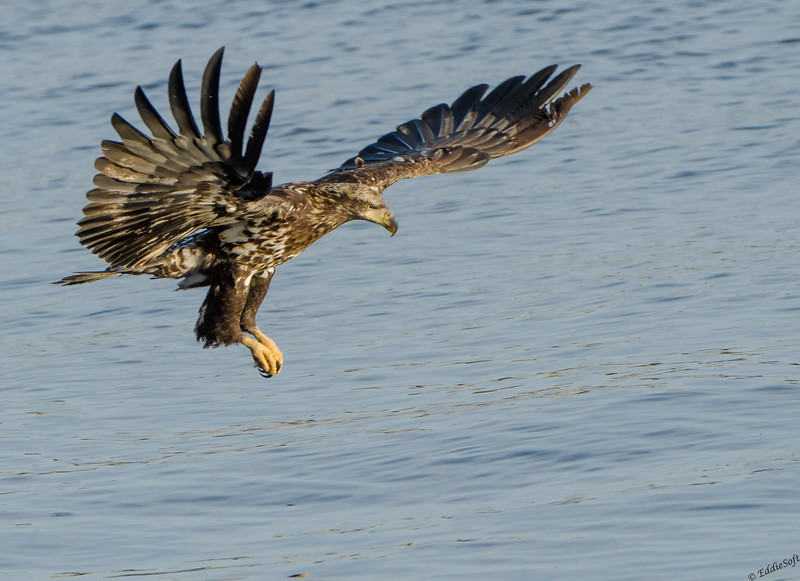 … and they might look a little goofier while they get all the mechanics ironed out.  This next one was probably hoping it didn’t end up on the Internet next to your singing in public shots. 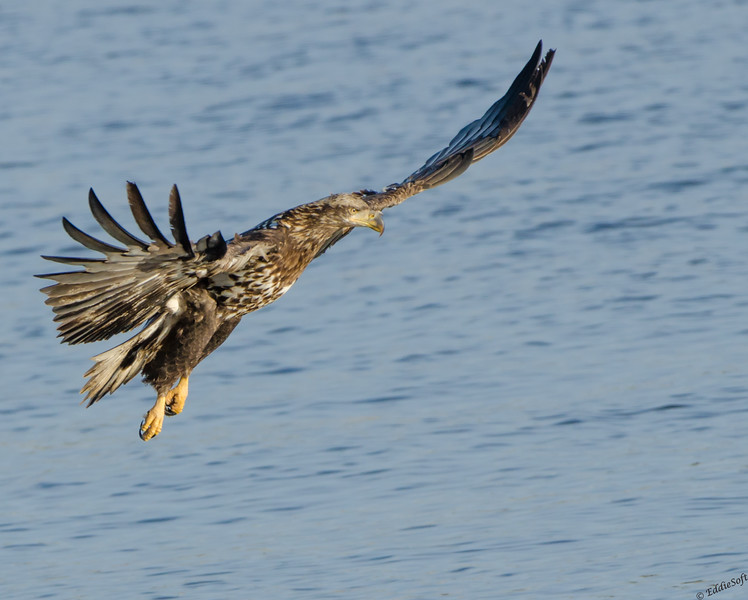 Hope you enjoyed a few different perspectives of our Bald Eagle.  Unfortunately, I need to go get some heat packs for my hands and a warmer shirt.  The body isn’t used to the cold weather as we get closer to home from a month in the sun.  Hey Linda, would you be open to turning this RV around and heading back!!!!!