Howdy folks.  Feeling a bit of sadness at the moment for our exploration is entering its last leg as we begin our return.  As a welcome home gift, Mother Nature has decided to throw a blizzard in our honor – we might be able to outlast it depending on our return path, but will not be holding our breaths – Midwest states have a way of making sure you never forget you chose to live in a four season state.  The good news is the trip was very successful and bringing back tins full of 2021 fodder… err ’22.. hmm ’23 ugh.  In truth, it isn’t really the snaps that I’ll remember the most, rather the great people I had the chance to meet along the way.  There is something about the birding community that is truly special – always friendly, always willing to share and always eager to help on an ID or provide timely education.  Gives you a feeling of hope as we’ve met people from all over the US that understand what it means to be courteous, kind and well, for lack of a better term, civilized. I’ll go into more details on the great people we met as the new trip posts roll out.  Until then, wanted to get to a topic I’ve been delaying for a while. 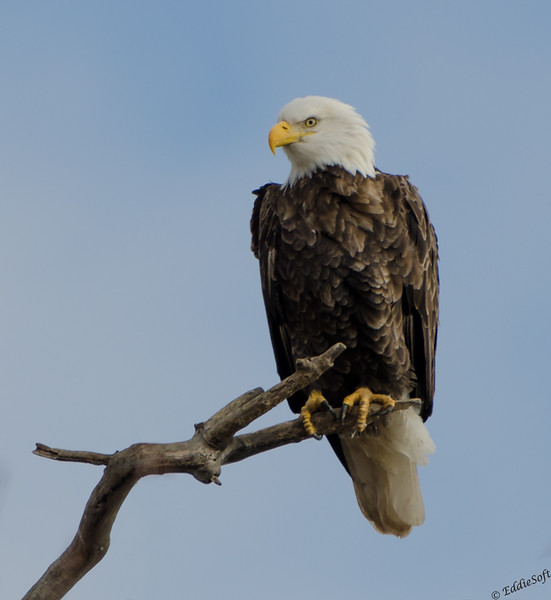 Our great country’s national bird, the American Bald Eagle.  Truly in the upper echelon of what I classify as majestic birds.  They literally demand your reverence when they are around.  Calm, cool, collected and strong all wrapped in a feathered shell capable of deadly force. 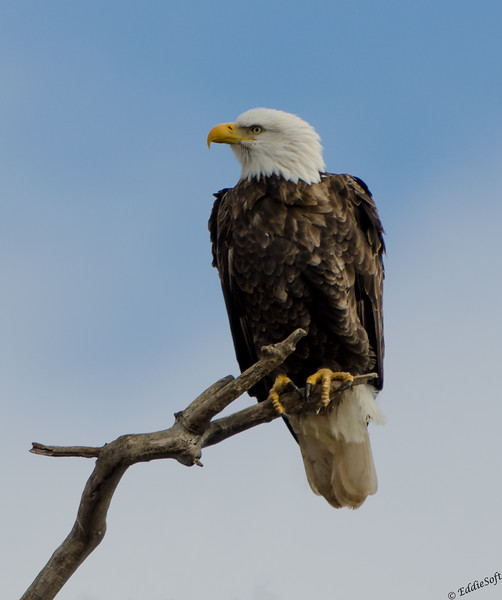 Hit the jump to see some more Eagles on sticks!

I cannot count the number of times I’ve stood below one of these creatures asking myself who is watching who.  They will stare down from their perch measuring me from head to toe – probably trying to figure out how many days my carcass would sustain them.  Screw all that work to track down food and perform aerial acrobats to snatch it out the water – this idiot below is bringing me take out. 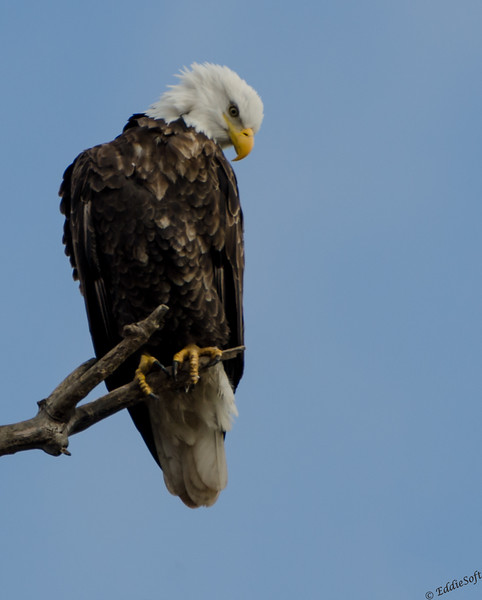 Every birder likely has that seed sighting that sparked the fire, that turned some switch that makes us haul our butts out in all kinds of weather conditions to feel the joy of seeing nature’s aeroengineers.  For some, seeing isn’t enough requiring additional (ridiculously) expensive equipment to be lugged along.  That trigger bird will always bring happiness whenever it arrives on the scene. 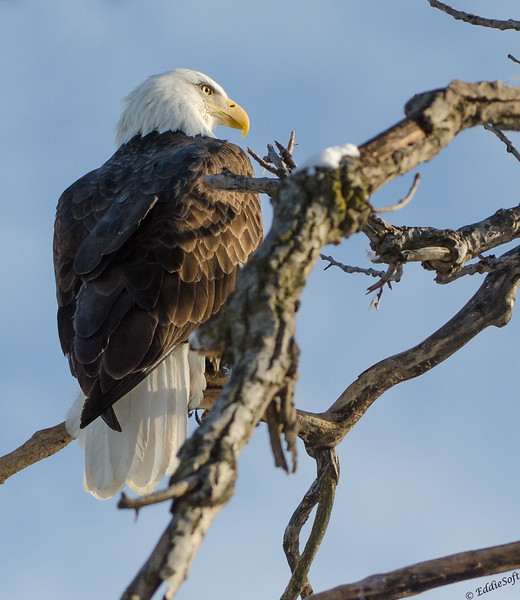 My trigger bird was the Bald Eagle.  In my first round of birding during the high school years, we’d see one from time to time on our various vacations.  I really do not remember it being very common in our neck of the woods back then – when the family saw one, we would always stop and enjoy the experience.  I left birding for the college years and some of the early career days as time – and money – were tighter.  Hard to be an amateur photographer with the costs of developing tins back then. 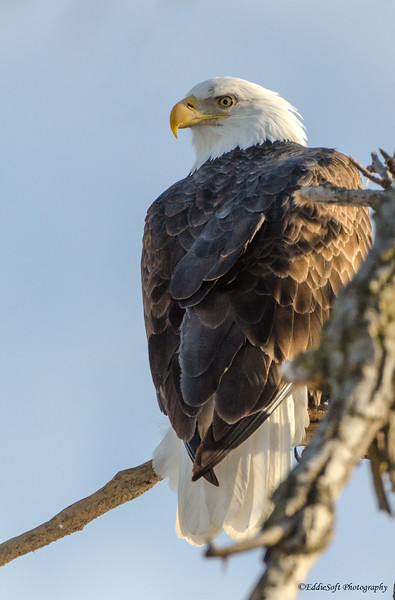 Ron was a huge influence on my early birding days and was responsible for getting my first film camera (yes, a Nikon).  I still have that camera and even has a roll of film loaded in it – god only knows what shots are on it.  Eventually came digital, a good salary and a few extra ticks of the clock to spend in the field.  Oh, another big factor was meeting Linda who hailed from Davenport IA. 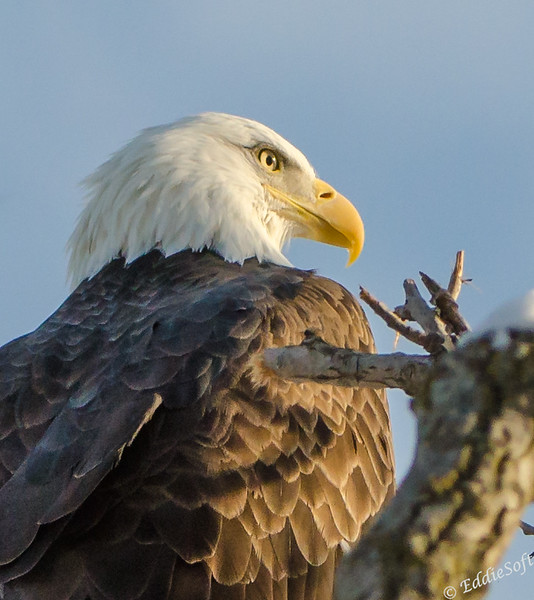 Guess what is readily available during the winter months in the Quad Cities (Davenport, Bettendorf, Moline, Rock Island)?  Say it with me “EAGLES”.  The Mighty Mississippi runs through there and that is a magnet for these magnificent creatures.  Pushed down from the freezing rivers/lakes up north, the Eagles have been gathering along the banks of this river year after year.  Sometimes maybe just a handful could be seen… other years the branches would be covered.  Linda would take me back home and we’d shoot Eagle after Eagle from sunup to sundown (again, thank you digital inventers). 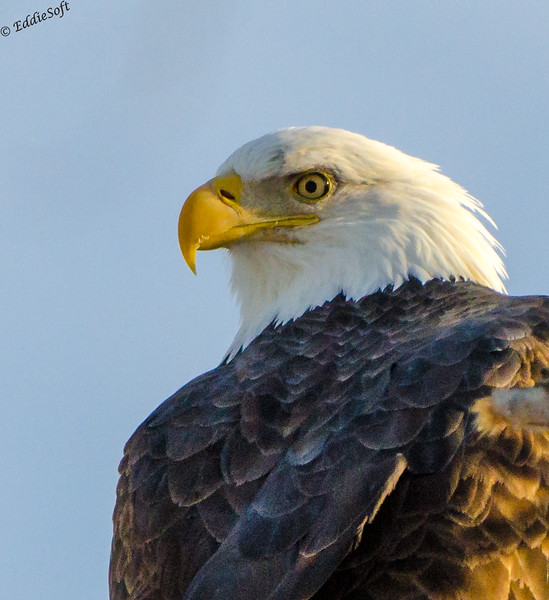 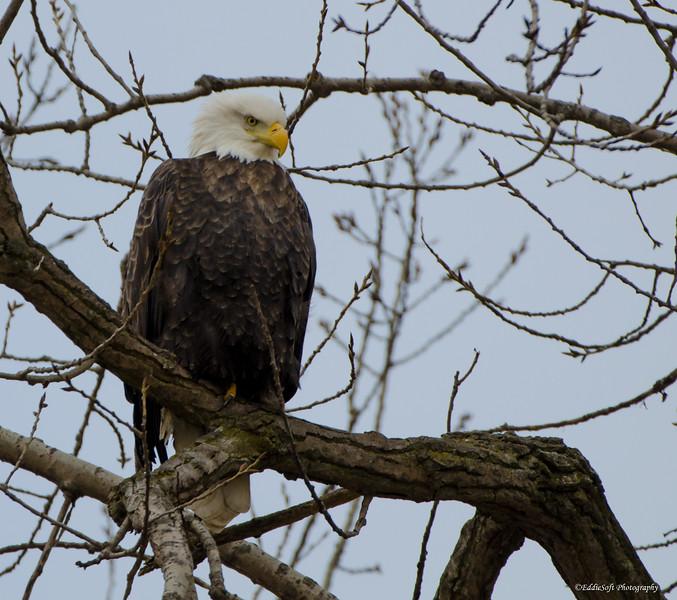 Before our cadre of overpaid lawyers descend on me like Hawks on a Vole, the following comments are only in respect to my image progression and definitely not meant to cast any opinion on other efforts/shots/perspectives etc.  Okay, onward.  I have literally a thousand plus shots likes the first image in the post.  Eagle on a stick looking outward contemplatively.  Maybe more than a thousand.  So many they are put in their own directory named StickEagles.  Go on a shoot, process them up, move them to that directory and plan to get back to them sometime in the future – I rarely did.  As the folder grew, I decided I’d try some new approaches. 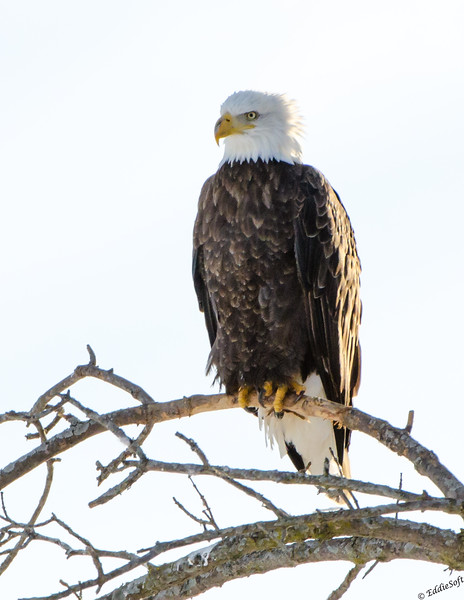 Maybe an different side – ie. image 4.

Maybe an Exorcist play and have its head turned 180 – ie. image 5 (now that just scares me).

No, I mean really really get right up in there – ie. image 7.

How about a white treatment on a snowy day – ie. image directly above.

I know – TWO looking in unison. 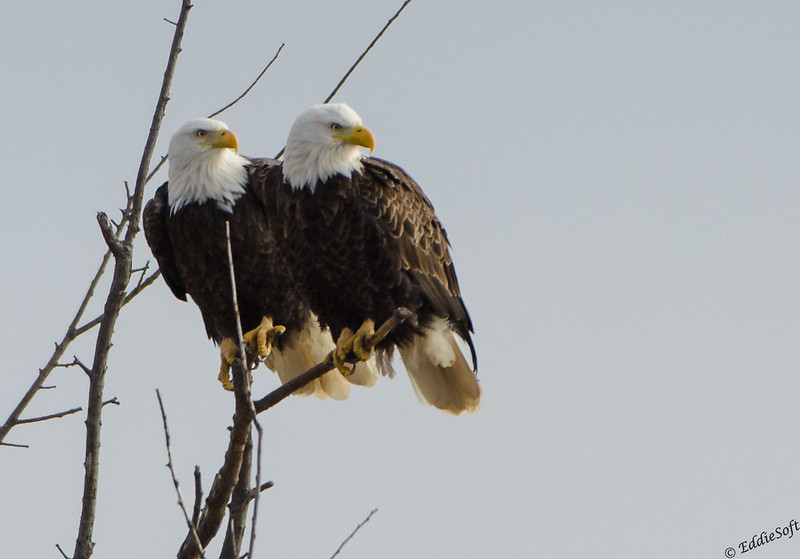 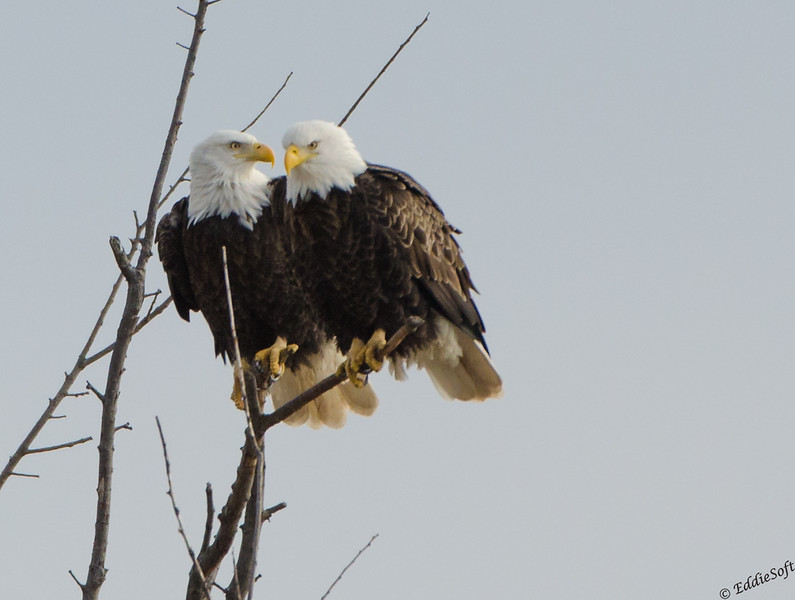 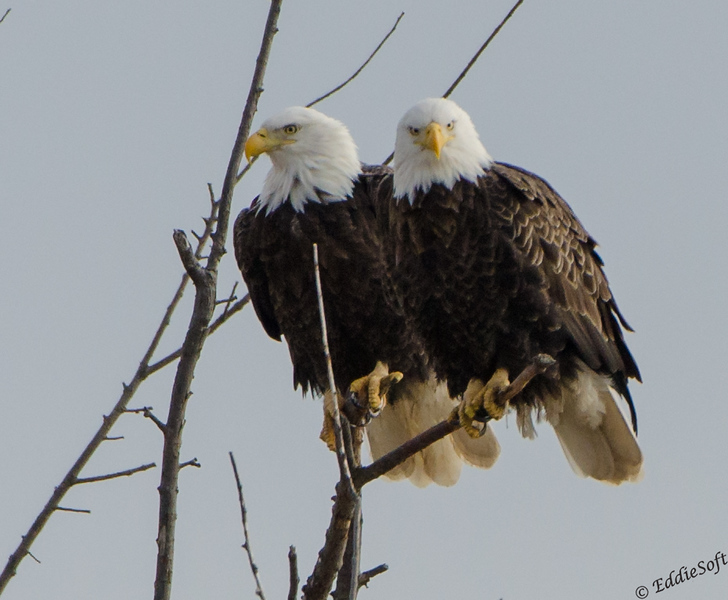 Immature with a death grip on a thin stick (likely a 3-4 yr old). 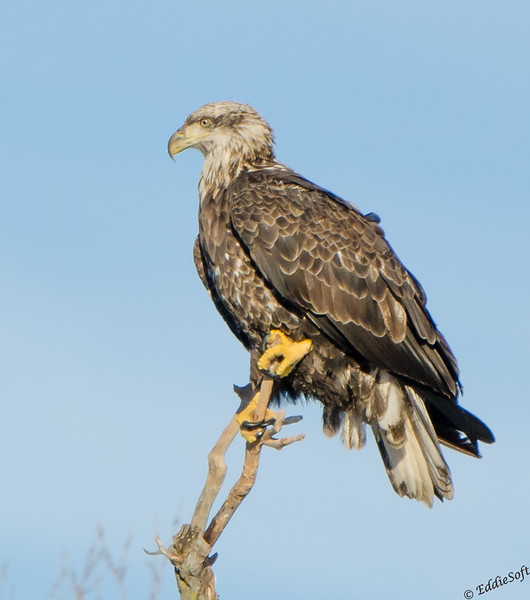 There I sat going through the images looking for something unique and captivating.  There was some definite improvements, but nothing knocked me out of my socks.  Each time out on a new Eagle shoot, I tried to shoot less of the traditional shots and focus more on some new nuance, behavior or pose.  Even beyond the traditional inflight shots which should probably have their own folder now as well. 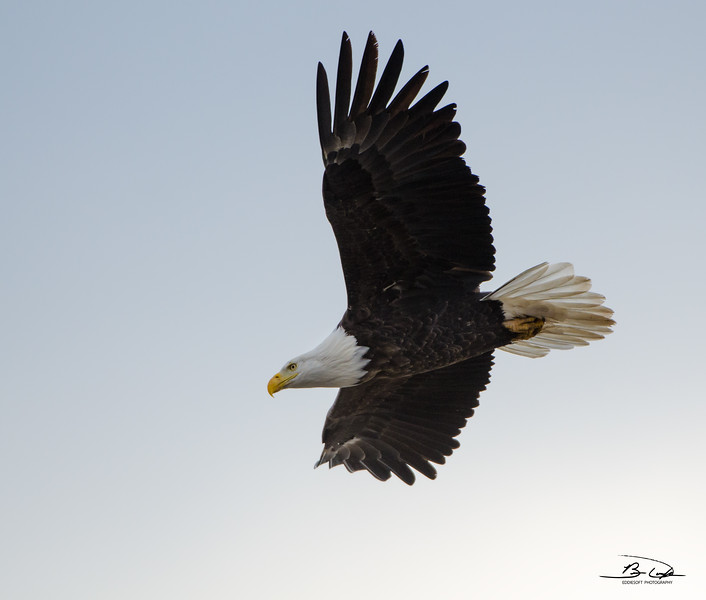 The more I waited to press the shutter, the longer I spent studying the available specimens, the more interesting my shots became – at least on a personal level.  Soon a new folder was made – InterestingEagles and slowly it began to fill.  Those will be coming in part two of this series.  Until then, a couple of questions for you to ponder.

What is your trigger bird?  what .. or maybe who brought the world of birding to your doorstep.

This one is probably just for the wildlife photographers – What bird/pose has earned its own “will get to it in the future” folder on your drives.

Stay safe out there everyone!