Finally found a chance to put down the “Honey-Do” list and invest some time in getting another post out. It doesn’t help that the back is still angered, but I got tired of it controlling me so sucked it up and started walking.. then walking some more.. then walking multiple times a day (for ~9 miles a day) and then extending those miles (6-7 miles at one time) and then said hell with it and ran a quick 5k today. Note to self, walking might be better for a tweaked back, but it doesn’t do much for runner lungs. We’ll see how it goes when I wake up tomorrow – fingers crossed. The good news is I’ve had extra time to attack the backlog of images and can say with a gleam in my eye I’ve been able to process all the “carefree and spirited adventures” up to 2 years ago. I might have to get the whiskey out for that celebration ha! 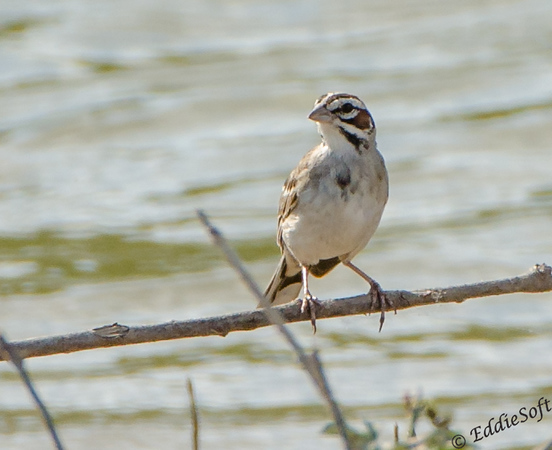 One of the “larks” my brother and I went on was back in July 2017. We headed down to Havana IL to see if there were any new visitors at the Emiquon National Wildlife Refuge. Emiquon is a gem of a place for us birders to look for visitors as they move through the migration corridor. This site along with Chautauqua and Meredosia NWRs are managed under the Illinois River National Wildlife and Fish Refuges Complex. Established in 1993, this restored wetland habitat sits at the confluence of the Illinois and Spoon River and according to the U.S. Fish and Wildlife Service now covers 2600 acres. 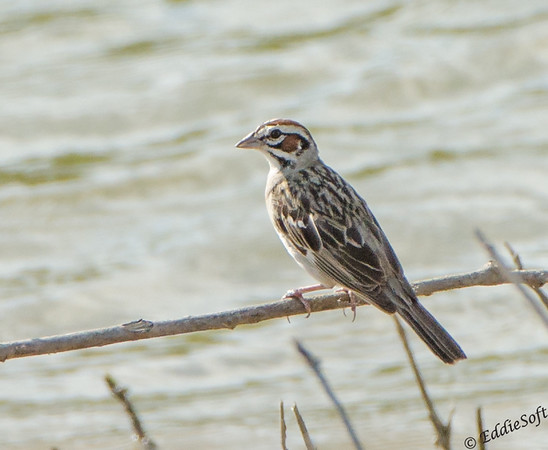 Hit the jump to a few more profiles of this rather dapper looking Sparrow.

Having pretty much covered most of the key areas of Emiquon, we took a quick drive through Havana proper (eats and drains) and made our way to its sister NWR at Chautauqua. Chautauqua is as interesting in person as it is trying to get the name spelled right. Nestled near Goofy Ridge, IL (I kid you not) you are likely to find a wide range of conditions throughout the season. Huge flocks of migratory birds will take a rest in its wide channels providing a multitude of viewing angles thanks to walkable levees that cross and parallel the wetlands. Go there later in the summer when the water starts to leave the banks and you’ll have to hold your nose from the stench of the thousands of dead carp oblivious to the dangers of staying out of the shallow pools. While Ron and I spent a loooong time trying to get the feeding Tree Sparrows shots (link here), a quick visitor caught my eye at the waterline. 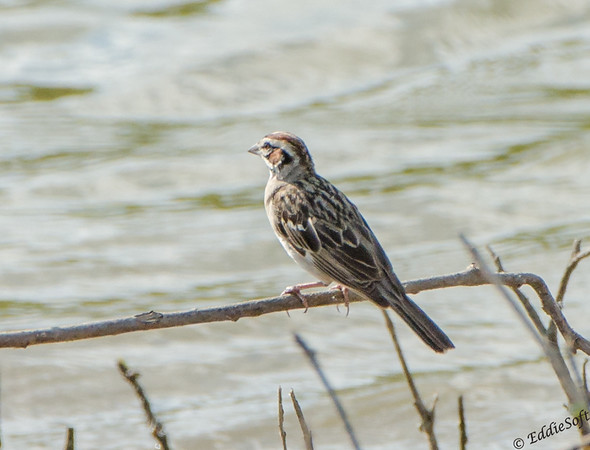 At first I thought it was your standard Sparrow – perhaps a Chipping, Field or Song based on the standard residents in the area. Fortunately, the very defined face pattern caused me to second guess… add to that it seemed larger than those other species – at least longer. A quick run through my mental reference charts and came to the conclusion this was possibly a Lark Sparrow. More notable as a bird I didn’t have checked off my list. The Beast was brought to bear on it and managed to get a few shots in the tin before it headed off down the levee. Being the kind soul that I am, made sure Ron also got a few snaps as this was a void on his massive list as well. (Note, thanks to Ron’s “Great Bit Bucket in the Sky” event his shots of this bird have … let’s just say lost polarity for the IT geeks out there. By our birding rules, since we were both there he is allowed to use my shots and take credit for the check as long as he makes notice on his blog (hey now, not nice to laugh, he promises to start blogging soon hehehe). Meanwhile, here is the back profile for our Lark specimen. Very distinct white outlining of the back feathering and the tail is definitely long for the Sparrow family – matches the overall long profile of the perched form. 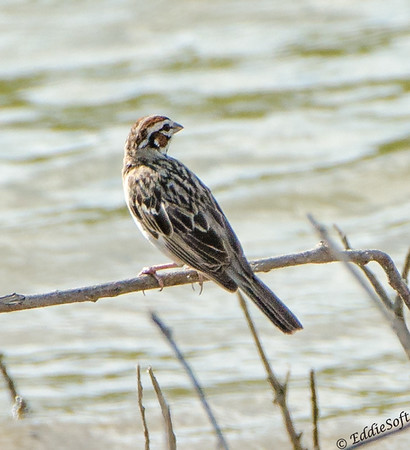 Yikes, out of shots – better get to some interesting time as a thank you for the time investment. With the exception of really the eastern 6th these Lark Sparrows are fairly prevalent during some point of the season. They tend to breed in Great Plains-West which is confirmed by this spotting. For the stunner this Sparrow is, I must say there are few interesting facts about this species. Cornell mentioned they have a fairly elaborate mating courtship that reminds me of a Wild Turkey strut where the wings are dropped to the ground and the tail is spread (of course, the feathers are not raised up like the Turkey). I did not get a chance in the few moments we had together to hear their song. Bummed, as they definitely have an interesting “jumble” (to steal Cornell’s word) of varying notes interspersed with a buzz or trill – clever bastards will also mix it up to confuse the hell out of us birders.

Well, will call it a post there – I swear to god that paint can just moved closer to me…. or maybe it was Linda pushing it closer to me in some form of nudge to get back to the Honey-Do list. Oh, and I had forgotten the other use of the term “lark” until it popped up on one of my searches – yes, you guessed it, “a carefree and spirited adventure”.

10 thoughts on “A Product of a Carefree and Spirited Adventure”