Things are looking up around here for a change. Our tax evading governor had to put his tail between his legs and rescind his latest emergency order that tried making criminals of any business owner that had the audacity to defy his proclamations. This thanks to thousands of angry responses and 6 democrat IL state congressmen on the JCAR that couldn’t even stomach the backlash and dropped their support. You are in a bad place if even democrat politicians think you are a douche in this state. Now with that little bit of Corvid-19 news off my chest, let’s talk about this pretty girl.

Ain’t she a beauty!?! Well, maybe not compared to the Texas finds with their colorful array of rainbow colors, but she has a feel of patrician with her finally matched color palette and classy headdress. I still remember with great detail on the day she came to visit me way back in September 2017. Yes, this is coming to you from the “lost but now found” collection. Oh, for the record, I am pretty sure I have enough images processed off my image queue to take me into at least 2025 at my current post production rate – so lemonade out of the virus lemons. Linda I were driving home from an extended trip in our RV when at the entrance to our driveway our featured feathered friend poked her head out of the tall grass at the side of the road.

Hit the jump to read a bit more about this “surprise” visitor.

I was completely shocked at what I was looking at. I had just traveled all the way up into Minnesota back a mere3 months earlier and saw my first Ruffed Grouse hanging out on the road (link here). You might recall, that Minnesota sighting just about cost my marriage thanks to my (lovely) overly cautious wife not wanting to stop in a strange place, in the middle of the highway, in overcast darkness, in midst of rain, on a curve while I got out to get my coveted +1. The debate still rages on whenever something reminds her about it — I’m right… right? it was a plus one after all. Feel free to weigh in with your perspectives in the comments below, however, keep in mind she married me for who I am.. better or worse.. in sickness and health (yes, she said that and I have it on tape with about 100 copies). Wow, I digress – back to our surprise visitor. 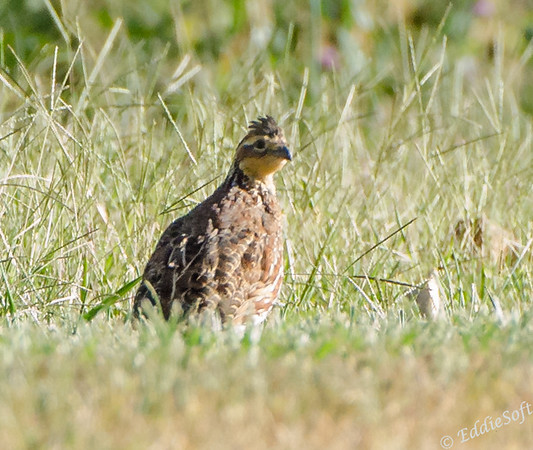 I made Linda stop.. in the middle of the road, in the country on a nice sunny day so minimal chance of seeing my clothes being scattered in the driveway on the walk back to the house. The tall grass was playing Marco Polo with my focus point driving me crazy trying to get a decent shot in the tin before she completely escaped into the safety of the woods. Luckily got a few that were good enough to discern with a big helping of post processing. Another Ruffed Grouse in the tin and this time only 300 feet from my house… or so I thought. After processing these shots I sent Ron a quick “brag” image and noted I should have probably reported it as it was definitely fairly sparse around IL as it prefers to hang out in our more northern states and up into Canada (thus the spotting in Minnesota). I inadvertently left off the species figuring it was a pretty easy ID and he should have no trouble identifying it. This was his response “Northern Bobwhite, right? It looks like you are right on the edge of its range. Wish I had one!” I read that line again, and then again until the shock finally wore off. What the hell!?! Immediately went back to Cornell’s website and reacquainted myself with the Bobwhite. Sure enough, he was spot on and I stood corrected. Now, too my defense, I initially went to the Ruffed Grouse probably due to my previous encounter up north. I will gladly debate with anyone that the first picture on Cornell’s site looks similar to my specimen. I did go through Cornell’s list of similar species and checked off their options (Spruce Grouse, Sooty Grouse, Dusky Grouse, Sharp-Tailed Grouse and Ring-Necked Pheasant).. The Ruffed still looked like the best match so went with it. Now, with the new information I looked at the similar species to the Bobwhite; Scaled Quail, Californian Quail, Gambel’s Quail, Mountain Quail and wait for it.. wait for it.. wait for it .. sure enough THE RUFFED GROUSE. So if you think you have a Ruffed they don’t mention the fact that the Bobwhite female looks like a more petite version of the Grouse, but if you think you have a Bobwhite then they alert you to the fact the Ruffed can look similar – WTF Cornell, us amateur birders need all the help we can get!

I did manage to get a shot of the back of the head for the complete perspective of the wrongly ID’d bird. To close out with some quick tidbits, the Bobwhite region definitely includes the year-round presence in Illinois. Could have fooled me as I’d been in IL all my life and had NEVER seen one in the wild before. Cornell does mention they are often heard over seen due to their near perfect camouflage – although not that great next to a road, maybe someday they will evolve to have a yellow strip down their back ha). There are 22 subspecies of this bird that have a wide range of male plumage/coloring where the females generally look alike. This has historically caused problems for the males on ladies night at the local Quail bar. Of course the female Bobwhites are a bit trampy and have a tendency to have multiple mates in a season. As far their name, bobwhite, that is thanks to their call sounding distinctly like “bob white”.

So, sorry for the confusion at the start of the post. As another attempt at an introduction to our fine feathered gal, I’d like to reintroduce you my latest +1 in my bird list, the Northern Bobwhite!

2 thoughts on “A Case of Mistaken Identity”