Woke up this morning and quickly checked if there was snow on the ground – nope, actually a nice sunny day which means the prediction of a blog post from my brother Ron when hell freezes over might have been a bit of an exaggeration on my part.  Yep, it’s true, Ron not only clicked the post counter, he delivered a fantastic tutorial on how to identify birds by a sound recording (link here).  Trust me, this amateur birder needs every tool I can stuff in the box when it comes to all those similarly feathered specimens.  Luckily, today’s featured feathered friend isn’t hard to identify. 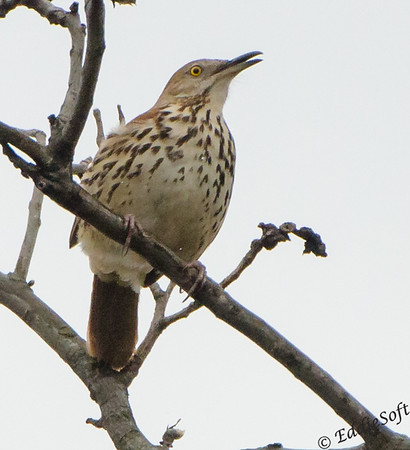 Better put a caveat on that statement.  When it comes to the prairie states, the Brown Thrasher has little in the way of imposters.  Head to the southern tip of Texas and you pick up the Long-Billed (link here) and Curved-Billed (have it, haven’t posted on it yet).  Head further west from there and you get into the Crissal’s territory.  Slipping into the point of Nevada brings with it LeConte’s and make your way  to the west coast and you will have to deal with the California variety (and nobody wants that ha).  The Brown on the other hand rules the East with a heavy bill and sternful eyes. 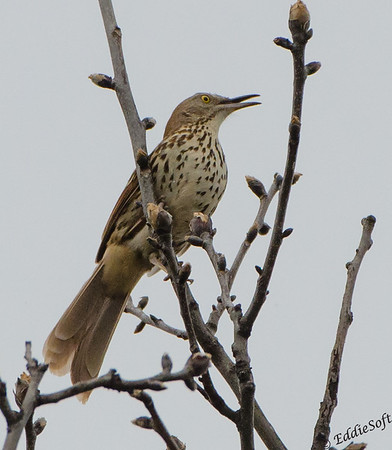 Hit the jump to read more about the yellowy eye encounter.

This series comes to you from a trip to Iowa back in April 2017.  It thought this was a fitting topic for today as Linda and I are currently making a break from our worthless governor to spend some time and money in that very  same state, specifically Linda’s hometown of Davenport.  That particular day back in April was extremely overcast with a healthy dose of wind and snow flurries (if you look close you will see some white flakes).  Getting anything worthwhile in the tin was a battle against ISO, shutter speed and ridiculous amounts of branch movement causing my autofocus to act like a caffeine junkie.  These were the best of the set after a healthy dose of processing in the digital darkroom. 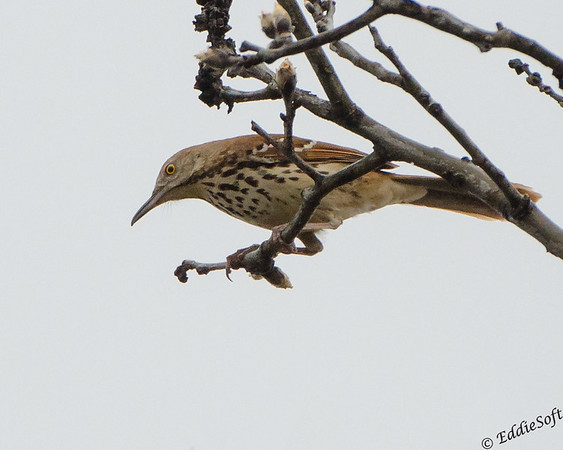 Of special note for that encounter, this is the first time I’ve seen more than 2 Brown Thrashers hanging out in the same place.  There were actually 5 adult sized specimens foraging together in the trees above for a significant spell.  For some reason thought these Thrashers were fairly aggressive so did a bit of research to provide some facts to that feeling.  Sure enough, Cornell did confirm .  “They defend territories of variable size, and they are very aggressive toward intruding Brown Thrashers and toward potential nest predators.”  The key word there is probably intruders as there really wasn’t mention of the brood relationships and if the same family maintains some relationship post maturation.  The 5 in my presence were congenial to each other – note, for the most part adult pairs are monogamous so will rule out free love scenarios hehehe. 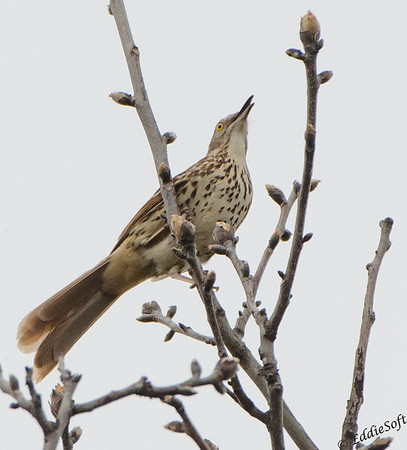 The other interesting note in the above account was the fact they were foraging in the trees versus the more commonplace ground.  They will certainly hang out in trees as a strategic positioning and nesting, however, Thrashers are more known for their preference for ground foraging.  This is where their long thick bill come into play allowing them to move leaves and debris around to reveal hidden insects.  The entire time we were there, the 5 specimens remained exclusively in the trees – devious bastards probably just having fun with a photographer trying to find a clear path through the ever-moving branches. 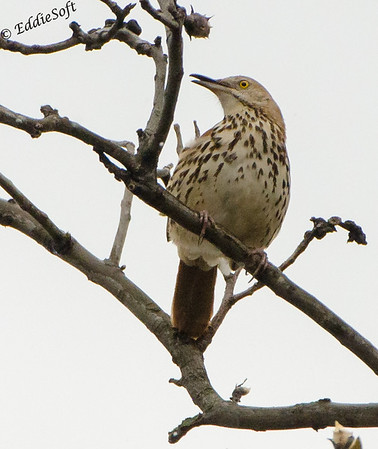 Probably the most distinguishing feature of these birds is their yellow eyes.  From a human perspective, yellow tinted eyes usually represent Jaundice – a condition where the body has too high a level of bilirubin likely from a liver condition.  That pretty much sums up my entire knowledge of what that condition is as  I’ve only really heard it in reference to young infants.  Unlike us, this is the normal state of a Brown Thrasher’s eyes.  I wonder if they put blue contacts in to freak out their friends on Halloween?  (normally, I would have just stated that as a fact, but my lawyers have been on my ass lately about making crap up ha). 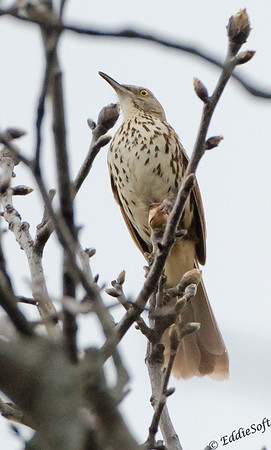 Well, we just arrived in Davenport, so will put a bow on this post.  Although not a new bird on the list, still hope you enjoyed seeing shots from another encounter.  Now it’s time to fly…. 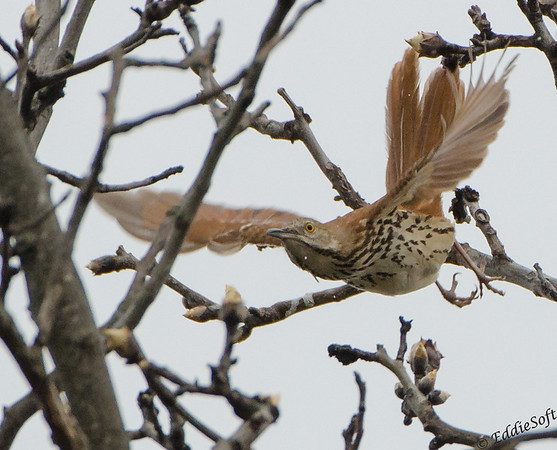 6 thoughts on “Iowa, Land of the Free and Thrashers”