Another month has been torn off the calendar.  Before long we’ll be in fall wondering where the hell the year went.  Of course, that is when the stress levels will start sky rocketing as that also means the annual Halloween Haunted Trail will be looming and my longtime readers know how crazy that time gets.  The good news is we are once again making a break for the soul healing abilities of nature’s outdoors. With our state park campgrounds finally open we were able to load up the RV and head up to Chain O’ Lakes for some relaxation, hiking, running, biking and of course BIRDING!  Unfortunately, we missed most of the migration season, but hopefully Ron and I can still get some Sandhill Cranes in the tin.  While trying to decide on what to feature in today’s post, I was thinking about the world as a whole – corvid, senseless rioting, cratering economy, worthless politicians, hypocrite professional athletes and propagandists masquerading as journalists.  Then I remembered this weekend was about tuning out (an interesting concept as I sit her and make a post) and dispensing with the pent-up stress.  Then it occurred to me – the perfect post was sitting in my queue already. 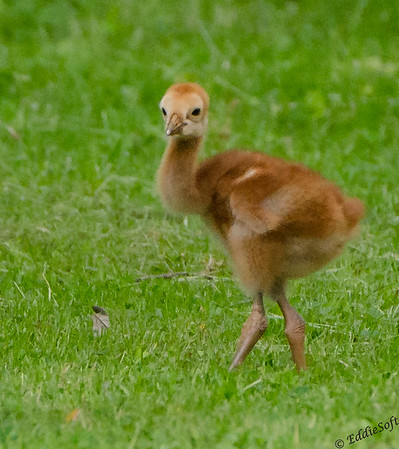 What the world needs is a little cuteness to melt the angst right out of its heart.  Personally, I can’t think of many things that would fit that objective better than a Sandhill Crane Colt.  I am pretty sure if we borrowed a few Colts from their parents and simply walked them out between two parties in any type of conflict, the problem would be immediately resolved.  Granted, we would immediately have to get the Colts back to their parents, but I am hoping they would be willing to help out with humanities current myriad of crises. 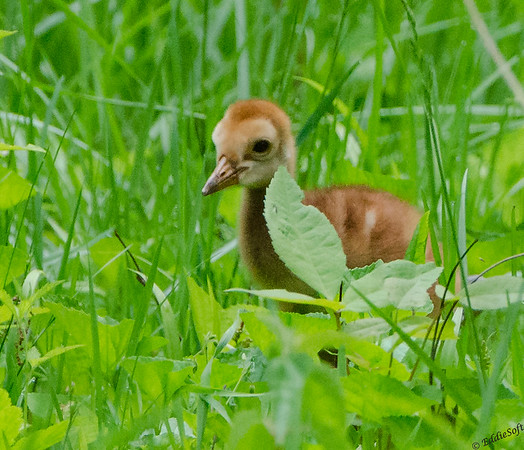 Hit the jump and prepare to emit a giant awwwwwweeeee!

I can imagine how it would go down.  “Where’s your mask heathen!?!, I don’t need a mask I’m outside you Nazi, It’s my air too you inconsiderate bastard, That does it, I’m going to kic…. hey, is that a Sandhill Crane Colt.  How cuuuuuuute, all fuzzy and cuddly.  Ahhhh, how about I put on my mask and we can just hug this thing out and then go back to our 6′ social distancing sans masks.

Of course, we may be too far gone as a society to actually find middle ground so chances are even something this adorable will be unable to overcome the hyper-polarization that society has transformed into.  We can always dream and of course, I will always have the memories of seeing these two little ones running carefree through the tall grass.  Check that, the actual memories may fade as the years tick by, however, that’s where this little adventure on the Internet will come in very handy.

So, a little background on our fuzzballs.  These Colt specimens were spotted on our trip to the Chain O’ Lakes State Park back in June 2017.  Raven had an agility show at the time which kept Linda occupied for the entire day.  Called up Ron and made plans to spend the day checking out the local wildlife.  Early in our day we came across these two Colts frolicking alongside their parents.  Unfortunately, under some dense trees on an overcast day requiring some major ISO blasting – apologies for the grain.  The weather conditions and the fact my camera’s sensor absolutely struggles with the fur like feathering on these creatures left some room for improvement on the shots – a sad attempt at deflecting blame away from the dude with the finger that pressed the shutter button. 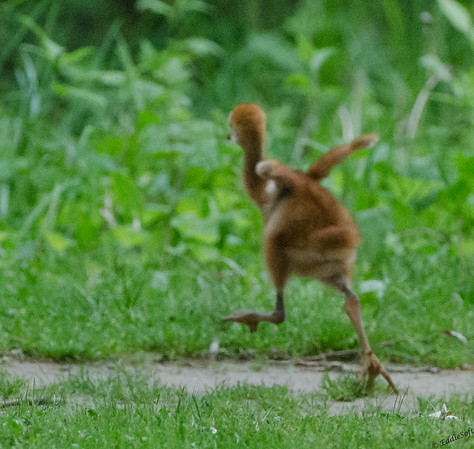 These shots are actually part of a much bigger series more focused on the interaction witnessed between the Sandhill Crane parents and their offspring – wildlife behavior is the real essence of my mission out in the field.  Although it is a key point in my birding/photography talks I probably do not cover it directly often enough here – although I do try to introduce a few tidbits here and there in the interesting facts when I add a new bird to the list.  I am still working up the larger behavior post on these Sandhills, however, I went ahead and release these shots early.. to help save the world ha… and if a shot of one Colt dancing like no one is watching doesn’t calm our nerves, surely TWO Colts doing the chicken dance will certainly do the trick. 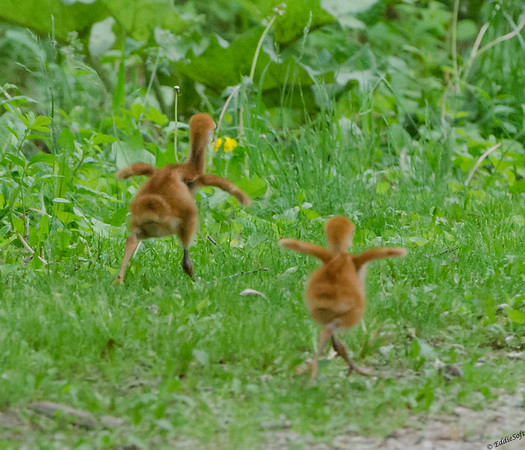 In closing, a bit of confession/correction here.  I’ve made numerous posts on the spoils from our Chain outings.  On some of them I refer to how convenient Chain is for Ron and I as it is located between our homes.  This topic came up again tonight as we planned the start time for our morning birding.  I added time for him as he recently moved further away (closer to the motherland – Chicago) only to have him state “it takes less time”.  I hate algebra, but Ron’s a certified math genius – as I say, with my parent’s third the brains gene got mixed up so they named me Brian.  So for him if b=park location, a=my house, c=Ron’s original house and d=Ron’s new house location (directly further away), then total distance (assuming point coordinate transformations increasing in northerly direction) = b-a + c-b + d-c = b-b + c-c + d-a = d-a.  This is where I mic drop – showed my work and all – grade school math teaching nun would be slapping that giant gold start across my page.  Ron responded something to the effect – “I know you suck at geography, but do you EVER look at a map!?!”  Linda overhead our conversation and added commentary – “we are north of Ron’s house you moron.”  Oh, well umm hey, have you seen my shots of the Sandhill Crane Colts?

8 thoughts on “Good Enough to Melt the World’s Heart”