Still fighting to get back to norm with my back. Officially pissing me off now that the weather has cooled down to perfect running temps. Decided I’ll give it two more days (including one more chiro visit) before I just say screw it, strap on the Asics and let the best man win. Things are a bit better as my doctor was able to get my legs back to the same length and now primarily focused on getting the swelling out of the sciatic. Until then I’ll just have to slither around. 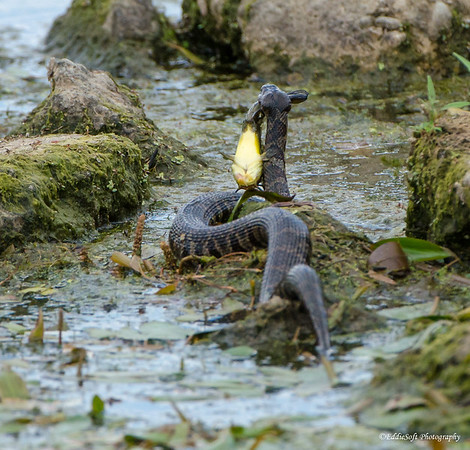 Oops, forgot to provide a coffee time warning, let’s correct that – for those of you that do not like small, slender footless creatures with forked tongues you might want pass over this particular post or minimally go grab your security blanket because this ride might get a bit bumpy. Yep, as you can see, today’s featured creature isn’t exactly small. Thanks to an interesting encounter at Emiquon National Wildlife Refuge back in July 2017 I get to bring you a BAWS. 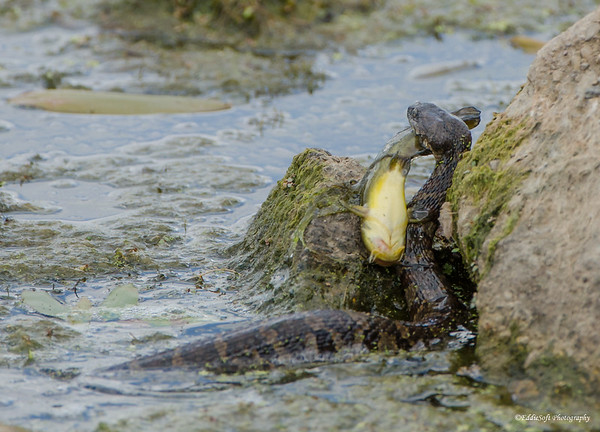 Hit the jump unless you are really not into these water spears in which case I’d wait a few more days until I have something new posted ha!

Nowhere close to those crazy people at National Geographic, but I’ve had my share of dicey encounters. I’ll never forget almost stepping on a Alligator (link here), being abandoned by my UB (wife) while another Alligator rolled up on us (link here), had a Brown Bear luckily reveal itself right before we headed down the same path (link here), had a stare down with a Bobcat neither of us knowing what the other was capable of (that I apparently still need to blog about) and later learned how stupid I was with an extremely large snapping turtle (link here) are some examples that come to mind. All ended well and as a result, got a lot smarter. 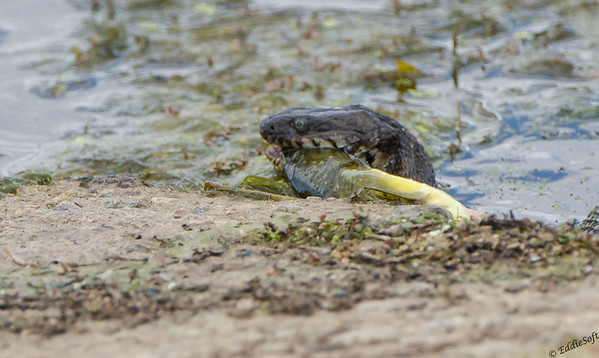 I’m rather blessed with the ability to remember extended details – although with exception to remembering things Linda wants me to do – probably more finely honed selective hearing ha. Each of those encounters I can pretty much recount flawlessly as they stay vivid as the moment of the encounter. I’ve spent a lot of time studying human behavior as people actually intrigue me even more than wildlife. Amazes me how those with the capacity for higher thinking can at like animals and those less gray mattered creatures can display an abundance of social cues and altruism. I’ll just leave that right there as I only brought it up to mention a theory I had that humans have the ability to store mentally based on a collective state of body diagnostics rather than just visual cues, smells, sounds, time etc. Think of it as a huge multidimensional index card file based on another set of dimensions including blood pressure, adrenaline levels, heart rate etc. that you experience at a given point in time. 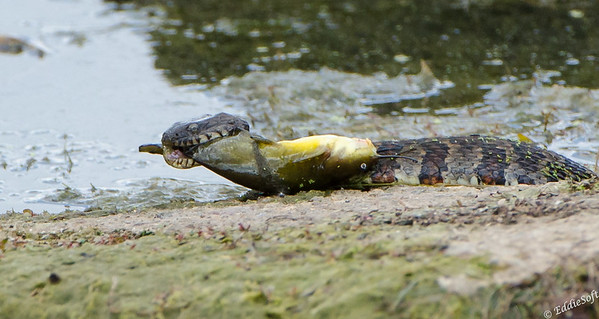 Never was able to get around to proving out the theory thanks to my programming classes eventually consuming me, but maybe something to take up once the office desk is vacated. Long story short, each of my personal encounters shot my heart rate through the roof, brought the blood pressure to boiling and at onset kicked in flight responses that could make it through a brick wall. The BAWS encounter here did the exact same thing. Ron and I were traversing a raised walkway through the marsh area at Emoquin when I looked down to our left and saw a Catfish floating above the water and across the rocks. 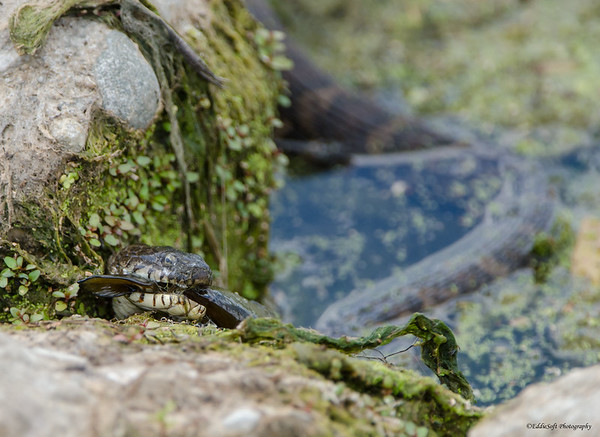 Initially, wasn’t sure how to rationalize that as you don’t often see a fish (a bottom dweller none the less) floating alongside you. While trying to piece it together, tried to get Ron’s attention. A split second later it hit me full force square in the internal flight reactors. “HOLY SHIT, look at the size of that snake”. True to our nature, both our cameras were up and snapping immediately. Thanks to The Beast, was able to get up close and personal with one of the biggest snakes I’ve ever seen in the wild – still think the one Ron and I saw above us in a tree at Wild Prairie Park takes top honors, but this wasn’t that far off). 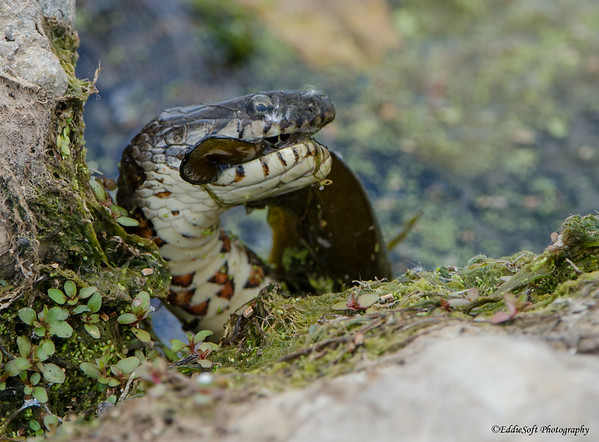 Now, with absolutely no doubt, I’m horrible at snake identification. Illinois really has few dangerous snakes and the ones I do come in contact with like the Garters, Blue Racers and Rat Snakes are easily recognizable. Unfortunately, we do have a venomous water snake which locally goes by Water Moccasin but actually named as a Cottonmouth. Distinguishing that venomous water snake from the other water varieties is difficult – all adept in the water, all have tubular bodies, all have forked tongues and all equally make me uneasy when in their presence – you get my drift. Therefore, the snakes that fall into this category are simply BAWS – BIG-ASSED WATER SNAKES. Being slow on the ID draw, I simply keep my distance and hope to god Linda doesn’t see one or all hell will break lose – she’s more likely to try to pet a grizzly than step within 20 feet of any slitherer. 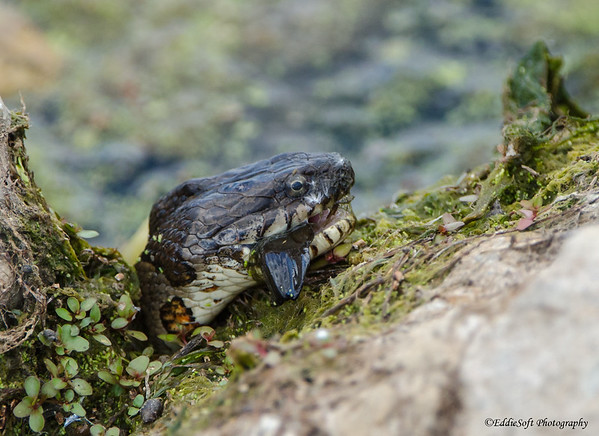 Luckily Ron takes photography as serious as I do and would never think to pass up this opportunity to tin some snake behavior. Eventually it decides we were not a threat to take its precious Catfish and headed off to enjoy a well-earned dinner. In case you are wondering, I do believe this is not a Water Moccasin and instead a Banded or Northern Water Snake. If anyone knows their snakes, would love to know if the Banded and the Northern are one in the same. The documentation is unclear from what I can find – some places like Wiki implied they are the same, where others reference them as more southern (Banded) or northern varieties. It also annoys me that the same snake can have a multitude of color palettes and it isn’t just at breeding time like our feathered friends. Will go ahead and call it a post here. Hope you enjoyed seeing something a bit different for a change – bad thing is I will know EXACTLY when Linda gets around to reading this post based on the scream that will ring throughout the house!