Good day everyone!  Get to spend the day at the hospital while Linda gets some medical tests done on her heart.  She has a birth defect that she has had to deal with that is now getting to a point that something probably needs to be done to correct it.  While I wait for that procedure to complete, thought I would get to the follow up from my previous post.  If you recall, I left you hanging regarding a field encounter that left me a bit rattled.  That unexpected jolt to the system was a result of the creature you can somewhat see below. 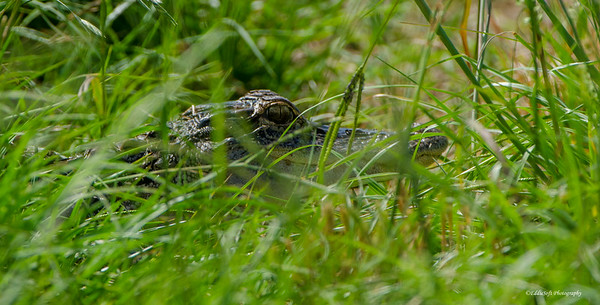 Now, I’ve come in contact with Alligators several times in my past.  As probably every kid in the US that is fortunate enough to take vacations as a kid, I had the pleasure of ending up at one of the Florida Gator parks and getting to handle one of their babies.  To be honest, they are pretty darn cute when they are a foot or less long.  Your own prehistoric plaything.  At some point in their development they no longer become cute and transform into something nightmares are made out of.  Still fun to photograph at a distance and numerous encounters have already been documented here at Intrigued (link here, here and well here).  The first two were definitely a safe distance away, the last one was closer, but I still didn’t feel overly threatened – Linda, on the other hand ended up running for her life to the safety of the RV.  That abandonment has come up several times on our outings as a point of contention and failure to perform UB duties – promptly dismissed by Linda of course.

Hit the jump to learn more about my unexpected encounter.

So, per the previous post, I was out in Harris Neck National Wildlife Refuge and had just made my way to a clearing in what turned out to be part of the abandoned airfield.  Linda was in the RV (still reliving her near death experience on the levee ha) and now shielded by a group of trees.  Having spotted the Cattle Egrets featured in the last post, I was moving through the weeds and trying to navigate to areas of broken concrete from the unkept field.  Years of exploring woods and ability to keep a map of my surroundings in memory allowed me to keep focus on the subject and less on my movement – after all, it’s all about the target and getting it into the tin!  Hit the shutter, move a few feet, hit the shudder, step up on the memory checked concrete patch, maybe take a brief moment to pull the camera away make a new mental picture and repeat the cycle.

Nothing new, done it lots of time in the past… ‘cept not in a swamp in Georgia.  In the middle of one of the steps to the concrete cycles, something made me stop in my tracks literally mid-step.  My guardian angel, Mother Nature, Xenu or the product of a radioactive spider bite – pick your poison – told my muscles to stop immediately.  With leg still in the air, I brought the camera down to figure out what the issue was.  That is when I discovered the foot was coming down on a patch of concrete that now had eyes!  Ironically a heart themed day since mine missed several beats and for the first time in a long time there was a sense of panic. 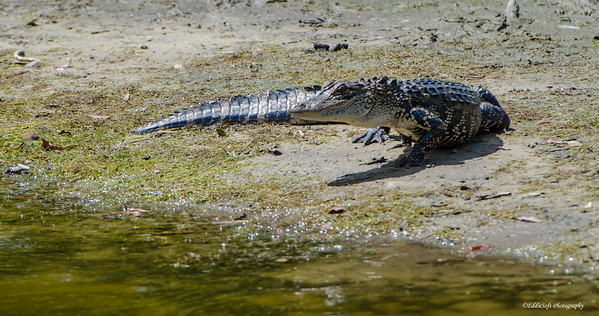 Fairly versed in these prehistoric creatures form previous research, their land speed was well noted.  Going out on a limb also assumed they disliked being stepped on.  There I stayed like a statue as the course of actions flowed through my brain – there Mr. Gator sat staring at me…or more specifically at my foot still hanging in the air.  Decided something had to give in the standoff and opted to sacrifice The Beast if there was any motion towards me.

Slowly brought the leg back in line to hopefully reduce its fears – note, by its never changing expression the word fear probably doesn’t appear in the Gator vocabulary.  Okay, now on firm footing if a mad dash was needed (running was in my favor, mental note, Mr. “0.0” Ron would pick up a new nickname – “munchie”).  Slowly backed away trying not to be threatening and wondering what the chance was for it to disregard this rude interruption to the day’s siesta.  One step, two step, three… heartrate coming back down, stoked the camera didn’t need to be sacrificed.  After getting myself a comfortable distance away, breathed a sigh of relief and then went about trying to get a decent picture of the threat… I have a blog that needs constant feeding hehehe.

Ended up only getting a few shots thanks to the tall grass and only one of those really came out good enough to put on public display.  There was ZERO interest in moving closer to get a better shot, Bri isn’t a complete moron.  Lesson learned and now another golden rule for my photography outings – pull the camera away when moving.

Granted, this encounter was significantly smaller than some of the hell-spawn specimens that have been featured here in the past, but it seemed plenty big at the time.  The pictures following the first are of a much smaller specimen that we located while taking the Glossy Ibis shots a few posts back (link here).  Still amazed those Ibises gave no concern about the threats that were circling the waters less than 100  feet away.

In summary, not sure what ultimately prevented what could have been a very bad situation.  Opted to cut that exploration short and headed back to the RV to relay the ordeal to Linda.  Ever since that day I’ve been a bit more cautious, more aware and a lot more dedicated to my running.  All things considered, not as threatening as when I dropped while running (link here) and pales to the threats others have to face on a daily basis, but nonetheless a moment that will not soon be forgotten.

That should do it for a while on the Alligator front.  Wanted to get this post out since it was set up in the previous post – didn’t want to leave you hanging too long.  Will likely get back to less threatening birds (although maybe not from Ron’s perspective) for the rest of the month.  Just got word Linda is coming out of her procedure so better go take care of her.

18 thoughts on “That Rock has Eyes”