For those that celebrate the holiday – Happy Easter everyone! When Linda wasn’t looking I stole her “Honey Do” bell and cut the clapper out of it. She was starting to abuse it (ha) and now that she is on the mend, my nurturing duties are officially over. I did cap it off with a well received pancake dinner in the shape of a bunny before the time officially ran out, so don’t feel bad for her. She’s still badly bruised at the insertion points, but good enough to move around and she even drove to a local store tonight for some badly needed supplies – good to go although I’ll be pressed into service again and this time for at least 3 months once the valve surgery is done. That one is going to hurt (me, not her hehehe). With the Easter holiday upon us, thought I would feature Mother Nature’s version of the Easter Egg.

Now how is that for a colorful bird? Linda is very particular about what birds she is willing to take pictures of. If it isn’t pretty and colorful she doesn’t even bother bringing her camera out. Blackbirds, Robins, dull garbed Warblers etc. do not merit the infinitesimal pressure required to push that shutter button down and clearly not wasting precious digital bits reserved primarily for waterfalls and landscape pictures. I call it elitism, which generally catches her ire. In this particular case she had no issue with snapping away and that’s clearly understandable. This Bunting is top two in my book across the entire birding world.

If you like brilliant blues, vibrant reds with splatterings of yellow-green then the Painted Buntings are your kind of bird. I should probably clarify that a bit and instead say then the MALE Painted Buntings are for you. I’ll touch upon the females and immatures later in the post – for now let’s just say only males made it into Linda’s tin. 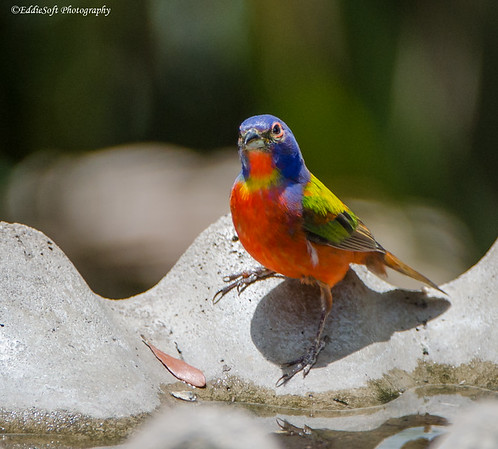 If you have spent any time on Intrigued lately, you are keenly aware that a large majority of those posts are products from our trip to the Georgia swamps back in May 2015. You also know that one of the two target birds for the entire trip was the Wood Stork – that successfully made it into the tin and posted previously (link here). Oftentimes, there is only one target bird for a trip. I like to stay focused and that makes the planning easier since stops are coordinated to the best chance of getting that bird in the tin. This trip I opted to have two target birds – the ugly and the beautiful. Clearly the Stork is the ugly reference. 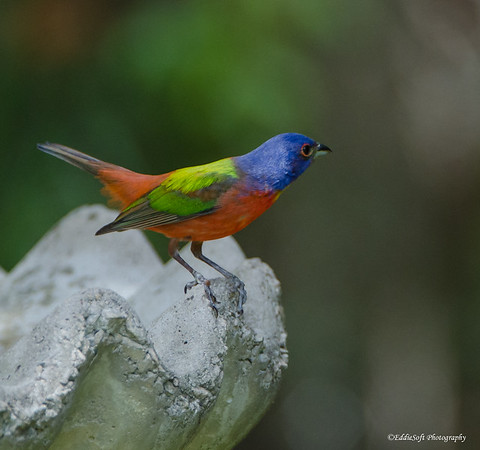 That other bird was the Painted Bunting and on a priority scale was significantly higher. The Stork was a good add, but the Painted was the cherry on top of the trip. The Storks ended up being an easy +1. The brochures were very clear that they breed at Harris Neck in the season we were heading out there. Kudos for the birders in that region completely nailing that description although a bit more depth on the Alligator population would have been helpful! The Painted was less of a sure shot. I had found a couple of State Parks that indicated they were residents, but tiny birds can be hard to find in a large park.

I was still trying to keep a subdued level of excitement as we drove into the entrance of Skidaway Island State Park. This park sits in the Savannah Georgia boundaries along the Skidaway River, one of the many inlets from the Atlantic Ocean. For the record since Linda has a propensity to mention how much she ends up driving on our birding trips, I was at the helm (Linda was on a conference call for work – no rest for us IT professionals). As I came up to the visitor center we were met by their version of the Walmart greeter – a huge Great Egret that was standing in the middle of the road. As we cautiously rolled up, the 3.5 foot tall Egret slowly walked to my driver side window and stood there looking in. I grabbed The Beast but it was too close even pulled all the way back to get anything but a series of nice head shots which I’ll likely feature on an upcoming post. Of course Linda had no idea what the commotion was being on the call. The Egret finally approved of our arrival and move back into the greeter position allowing me to pull into the visitor center parking lot and enter the center. While getting park details from the ranger, I asked if there were any Painted Buntings sightings … still braced for disappointment. “Sure they were seen today out back of such and such a building” WHAT!?!?!?!?!? I think I would have given The Flash a run for his money as I bolted out the door, did a Dukes of Hazard slide over the RV hood, jumped behind the wheel and pedal slammed over to the mentioned building. Once there, scooped up The Beast and tore out of there. Linda claims I failed to even mention where I was going – that account is still under debate to this day. Thankful I was in runner shape for the all out sprint to the back of the building for the pot of gold at the end of the rainbow.

There was a handy chair at the back of the building which I took up residence in immediately, now eagerly awaiting targets. Another photographer came up a few minutes later and took a seat next to me. We ended up having a great chat between shudder bursts when a Painted would arrive in the area. He was unaware of all the Wood Storks at Harris and was eager to get over there- he had been to this location for the Bunting several times providing a great resource for all the questions I had. 2 for 2, the Georgia trip was an absolute success not to mention all the other incidentals that got checked off on that trip.

I mentioned previously that the Male was blessed with the brilliant coloring. The females and immatures sport a full suit of yellow-green feathering although it is a bit more brilliant that your standard olive colored birds – just a bit boring compared to their paint-balled males. Wow, already blew through the pictures planned for this post – time to get to some interesting facts stat. First off, the males are quite colorful – oh, you got that point already ha. They tend to breed in dense foliage likely to cut down on predators since they pretty much stick out like a rainbow on a cloudy day. They are of the Bunting family putting their size in the small 4-5 inch range and have the standard thick bill for seed crushing. Cornell states they spend their winters in southern Central America and the everglades and Cuba expanding into southern Midwest and inward along the southeastern coasts during breeding season. The French name for this bird is “Nonpareil” meaning without equal in recognition of its plumage which leads us to the dark side of facts. Due to their colorful plumage they are often illegally caught and sold into the pet market in their regions (primarily Central America and the Caribbean). Looks like they were sold by the thousands into Europe in the 1840’s and I would guess a few of those have manage to get into the wild – not sure what their populations look like over there now.

A final angle for Ron and as tradition, signaling the end of the post. 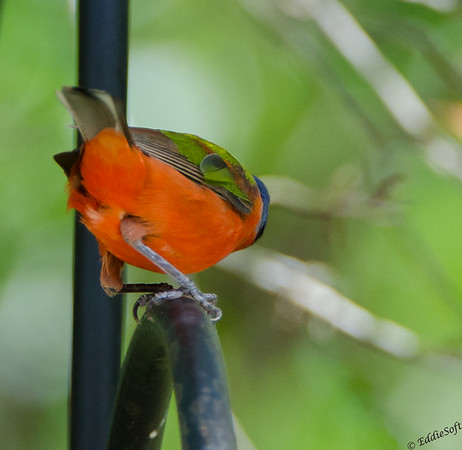 Hope you enjoyed this truly wonderful bird and my second favorite of all the birds I’ve had the pleasure of tinning. I’ve had it in the tin for several years with a constant worry that something would go wrong with my storage solutions (people in IT obsess over this, trust me). I wanted to bring it out on a special time and figured Easter would be a perfect match. Now to go find some sugary Peeps to eat!

13 thoughts on “The Easter Egg of the Birding World”