Greetings everyone!  I am officially on the road again  as the weekend has brought with it the second race of the season.  Technically I should refer to as the 3rd and 4th race of the season as this is again another double event like the one two weeks ago on the trails at Allerton State Park.  This time I’ve left the trail shoes at home and will be lacing on the road shoes.  It all kicks off at 7:30 tonight with an easy 5K followed by a half marathon in the morning.  Being that it is on campus of my Alma Mater (University of Illinois) it comes with a bit of nostalgia, however it RAINS EVERY STINKING YEAR for this race.  Then to throw on insult it is usually windy – keeping with tradition, the forecast has revealed that it will be ummm raining with wait for it … wait for it … 20-30 mph winds.  This race is cursed.  I told Linda this may be my last year for this and find a trail run somewhere instead.  At least the trees would cut the wind down (running in mud can be a lot of fun if you oink from time to time).  Being as it takes 2 hrs to get to the venue, figured I’d get some blogging in. 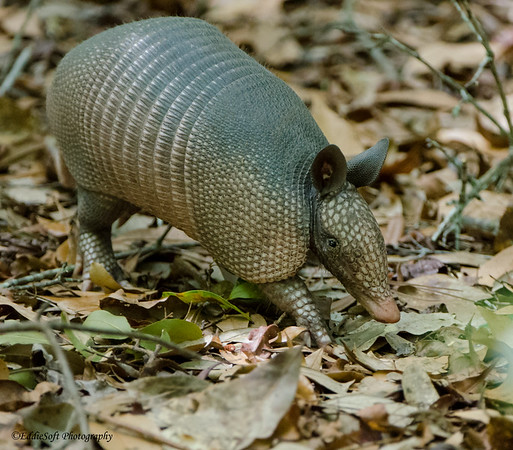 The anti-birding lobby that has been getting a bit irate lately should be pleased as I can most assuredly tell you the creature before you is NOT a bird.  Nope, no siree.  Although, I would contend that if were to jump and get those ears moving fast enough it might be able to hover there for a bit.  Wait, this just in – the army of lawyers employed by Intrigued has informed me that I must refer to their ability to hover as “speculation only” and should be treated by skepticism by anyone stupid enough to use this site for any type of official reference – can’t wait to see what happens when I start talking about their shells being bulletproof.

Hit the jump to learn a bit more about these intriguing looking beasts.

Time for full admission here – I knew little to nothing about Armadillos prior to this post and although I am usually complaining about my early education, it did manage to teach me what one of these things were so I could recognize it in the field (they probably called it an Anteater, these are the same people that lied to me about the Brontosaurus).  Possibly shocking in itself, I can also admit I had never come upon a live one until this trip to Georgia back in May 2015.  I would see a dead one on the road or a shell from time to time, but that is it.  Linda probably thought I had just stepped off the alien spaceship as I raced around trying to get a shot of this armored rodent.  Trust me, it’s the little things in life that seem to bring me the most joy.

First impressions, these Dillos are a bit creepy and cute at the same time.  Much like clowns except with a cute part.  Kind of reminds you of an egg that was crossed with a Rabbit.  Unfortunately for the Dillos I do not think anyone is going to try and cuddle with them.  In fact, based on the research they recommend you DO NOT cuddle with them as they are very susceptible to the leprosy disease – and you thought baby Turtles and Salmonella was bad.  Clearly this is a lie stoked by the Armadillo Lobby so humans will leave them alone – sorry, substitute speculation there – damn lawyers.

From the multitude of hours poring over reference books, going down Rabbit hole after Rabbit hole on the net and doing my own research on some live specimens at the local zoo, I’ve learned a couple of interesting tidbits about these big eared eggs.  First off this one happens to be referred to as a 9-Banded variety.  Originally I thought this referred to the bands on the tail and trying to figure out why there was more than 9.  The bands they are referring to are the bands resulting from the overlapping armor plates along the back which when counted makes a lot more sense.  They will indeed curl into their armor if a predator gets the jump on them.  This variety is unable to curl completely in a ball, but definitely enough to cover up the soft underbelly.  They are quite fast on their stubby little feet and will often just escape into deep brush should creatures with nefarious intentions come upon them.  From the encounters I’ve had with them (we’ve come upon them a couple of times in Texas since then), I find them to be rather tolerant of having The Beast pointed at them.  As long as you kept a respectable distance they went about their daily routine which appears to simply be foraging and digging in the ground for insects and other invertebrates. Although they do have small legs, they do have a defense reaction of jumping up in the air (references say 4 to 5 feet but I find that really hard to believe from a weight to size perspective).  This defense results in a lot of casualties with cars and thus the reason for seeing dead ones on the highways.  Running out of shots, so I’ll leave you with a final tidbit.  Armadillos tend to birth 4 identical quadruplets which puts a tremendous amount of stress on the mothers trying to keep them apart.  Sometimes you will see crude numbers drawn on their backs with dandelion flowers to help mothers distinguish them.

Here you can see the tail bands I was mistakenly referring to.   Better wrap this up, we are almost to the U of I campus and I need to navigate our way to Memorial Stadium.  Hope you enjoyed this little deviation from the normal fodder.  Wish me luck this weekend!

11 thoughts on “Little Armored Ones”