I’m back! Sorry for the long delay in getting a wildlife related post out. It isn’t that I haven’t been productive this month, just decided it was time to give a little love to my loyal readers on my other blog. Since those posts were neither furry nor feathered animal related, they were not replicated to this more narrowly focused social outlet. In an effort to provide some compensation you get to experience something rather rare in my blogging world…

Ummm, definitely not rare in the sense this blog has a very heavy leaning to our feathered friends. Nope, this oddity relates to “when” not “what” nor even “where”. Typically the shots featured here are produced from a queue that currently spans over 2 years. This a result of a horrible backlog that makes me break out in cold sweats every time the thought of that queue comes to mind. No need to find a towel to dry off for this post! (keep telling my wife I need and intern ha)

Hit the jump to read more about this incredible birding experience!

This set of pictures was taken at the beginning of this very month. So fresh it will hit on anything that moves at the local singles bar. My brother Ron was able to come down for some weekend birding in the Havana IL region. We were headed down to see what our favorite birding hotspot, Emiquon National Wildlife Refuge had to offer. Another primary goal was to try and get Ron his Western Kingbird. Fingers were crossed since that Western had eluded on at least two previous outings. Emiquon was holding back on us that day, so we headed out to Chautauqua National Wildlife Refuge. Ron always like to experience the radiant sights and sounds that make up Goofy Ridge, IL and therefore opted to hit their NWR levee access. We probably walked only about 50-75 yards out on the Levee when we spotted a group of Swallows hanging on the dead branches of a small sapling. 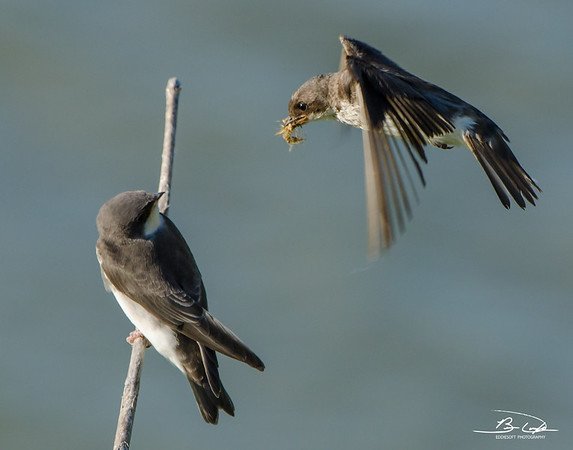 Initially we were not entirely sure what they were beyond a likely swallow of some sort. They all pretty much looked alike not really showing any definite distinguishing marks. Each of us started taking shots (of course, birders NEVER pass up taking a shot of bird because you never know…) There were plenty of Tree Swallows canvassing the waterways showing off their amazing acrobatic maneuvers. Always brings a smile knowing every time they dive – one less pesky insect will try to annoy me. Eventually a Tree Swallow specimen slightly larger came flying towards the branches – immediately every head turned toward the approaching Swallow and the attached bills opened to their fullest extent. Well, all but maybe the one below hehehe.

Sure enough, the nurturing mother was bringing food for her offspring. Amazing! She would choose one of her babies, hover over them for a brief second and deposit a juicy insect. Okay, this scene just got a whole lot more interesting. It also required us to amp up our technical skills to get the shots we wanted. I will not belabor the point that Ron’s camera rig weighs about as much as one of these birds giving him a leg up on me who, in contrast, hauls around a >10 pound rig. People think I like to work out for the fun of it – not really – rather I like to spend times doing outdoor photography which requires me to be in good shape to get to where the good scenes are and to be able to last through the day! Ron and I must have stood there for close to an hour trying to cue off an incoming adult or take notice when the mouths all opened up. Fingers on the shutters, we swung our glass around trying our best to capture the moment. 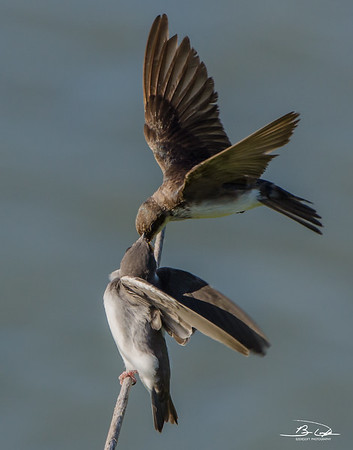 There were a LOT of pictures taken at that spot and I mean a lot. Pretty sure it was also the first time I have seen Ron go full high speed repeating shutter mode trying to anticipate the flight in and ultimately capture the food transfer. The digital trash can ended up being full of failed efforts – thank god film has gone by the wayside. It was amazing to see the parents come in, pick out the offspring that was next in line and provide the bounty from the recent hunt. This was repeated tirelessly by the parents. Oh, just noticed the previous shots were primarily of the mother – the father was carrying the workload as well.

Actually, we were hoping to get more shots of the male simply based on the fact he provides a more colorful shot. Haven’t heard back from Ron yet, but my shots of the mother feedings came out better than my male attempts. No complaints, extremely happy with the overall set I chose these shots from. The first shot on this post was one of my entries in the UB fair competition this year (results of that to come in a future post).

Had a great time experiencing this circle of life. Eventually we decided to move on to see what else the Levee held for us. Guessing we spent another 1 to 2 hours exploring the Levee before eventually making our way back to the Swallow location. There the babies were still patiently waiting for food to arrive from their tireless parents. Now the sun had dropped a bit giving even better lighting than before prompting another round of shots. Although the branch in the foreground is disappointing, personally really like the rest of the composition of this next one. Remember thinking at the time that it looked like a line at a fast food restaurant – order up! 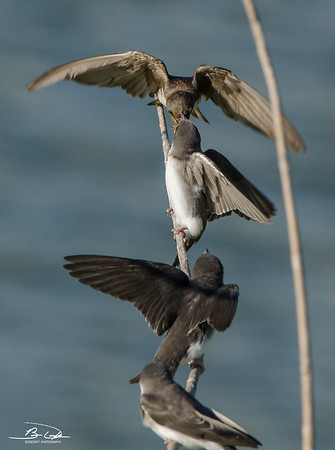 That’s all the shots I have for you today. Hope you enjoyed the fruits of our July birding outing. Very happy with the shots we were able to get that day and yes, we were FINALLY able to get Ron’s Western Kingbird checkmark.

7 thoughts on “Fly In Food”