Amazing how fast this month went. Seems like days ago when I was relaxing by the pool with a smugness born out of knowing I had successfully made it to the standard post quota for another month. Add in a healthy dose of training runs, a local birding run, an out of state birding vacation and an agility dog show we find ourselves right back in the fire trying to closing it out. The good news is I have plenty of fodder to choose from these days having done some overtime in the digital darkroom. If you thought the last post was fresh, this set of pictures still has the chemicals dripping off them. 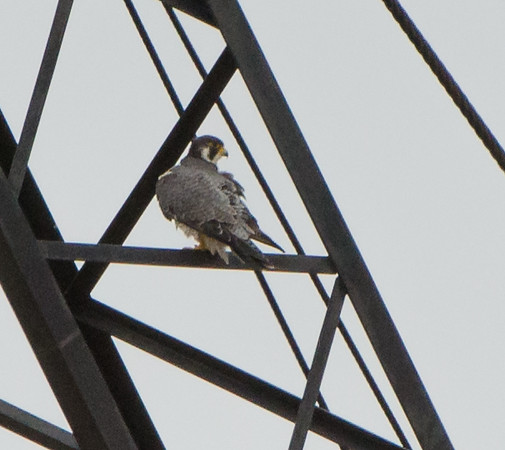 First off, a bit of an apology. This set of pictures is not my best work. Even with The Beast (200-400mm) I was barely able to reach the subject. The fact it is good enough to even tell it is a bird is amazing in itself. However, I was not going to leave without getting something to verify my new +.5 encounter. Hopefully, you are in agreement that the shots that were obtained are sufficient enough to ID this deadly feathered predator as a Peregrine Falcon. Technically this isn’t the first time a Peregrine has appeared on the blog so giving myself just a .5 instead of a whole 1. While closing out a Yellowstone trip back in February of 2016 (link here), I added a single shot of a bird and asked for verification of whether it was a juvenile Peregrine. My brother Ron did provide feedback confirming the juvenile. Now I officially have the adult version producing the full +1 yeah! 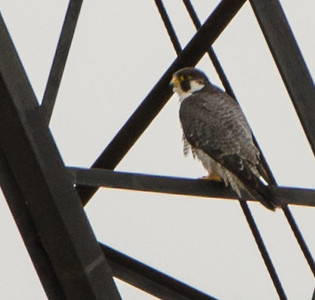 Linda and I were coming back from our birding and waterfall trip up in Minnesota a few weeks back. Trying to maximize our birding opportunities, we opted to follow the Mississippi down. One of the spots we decided to check out was Bellevue IA. They had a lock that looked interesting – we have good luck at locks and dams having shot numerous Eagles at the lock and dam in Bettendorf IA. At first the shutter finger was falling asleep from lack of action. Also bummed that the Corps of Engineers had erected a tall fence preventing from me getting as close as I wanted. Thus the reason the zoom was maxed. In hindsight should have went back to the RV and slapped on my teleconverter. Mental note for next time this happens to me.

I was just about to give up and label it wasted time when a large bird rocketed by. So fast, that originally dismissed it as my eyes playing tricks of me desperate to make something out of the visit. Took a bit, but spotted the same object putting our fighting jets to shame attacking Tree Swallows dumb enough to test the skies. Never seen a Peregrine hunt before. Absolutely amazing experience – so much that I forgot all about the camera. The Swallow’s are no slouch in the sky either (see the previous post). It was a battle, but each time the intended victim was able to do just enough to successfully evade the attacker. Three fails later the Peregrine headed away. At that point remembered why I was there in the first place and got The Beast pointed in the right direction. By then our specimen had taken rest on a large crane quite a distance away on the lock – damn fence! Give Linda credit, she patiently waited there listening to me complain about the fence until a validation on the viewer looked sufficient enough to claim the check mark. 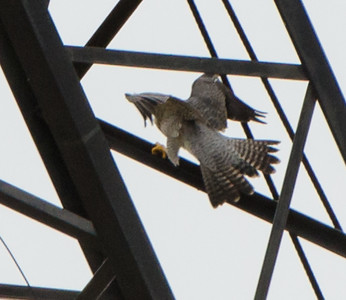 So there you go, a round out of a previous sighting adding the adult specimen to the collection. Yes, the fence still torques me – somewhat tempered by the fact it ended up being a productive visit. Since it is the first full featured post of the Peregrine, let me hunt down some interesting facts. First off, based on the regional maps, this Peregrine was a long way from home. They tend to hang out West and down into Latin America. There are a few sightings from time to time around cities. Think Ron mentioned he was going to head down to Aurora IL to see one that was hanging out there. Their flying ability is well noted in the birding world. They average in the 30mph range and can ratchet that up to near 70mph when engaging prey. Kudos to the Tree Swallows for being able to out maneuver their dangerous encounters that day.

Hope you enjoyed seeing my latest addition to the birding collection. Again, apologies for the sub-par shots. Stay tuned!

4 thoughts on “The Deadly Skies”