Okay, back to the regularly scheduled programming.  I think that does it for the missed Yellowstone featured posts, so I can get back to clearing the rest of the general shots from the trip back in May 2013.  Not a lot of text here – these posts are all about the pictures.  They may be soft, they might be really soft and in some cases  (like the last) barely discernible.  For those that have never been to our first National Park, these clearing posts will give you feel for all the wildlife you are sure to see out there.

Let’s start with the Moose.  The Moose is one of those Holy Grail animals for a Yellowstone or Grand Tetons vacation.  There are fairly hard to find and their numbers are small compared to the other residents in the parks.  To put it in perspective, this is the only Moose that we encountered while in Yellowstone, compared to the large number of Bears that were shot (and featured previously here).

This one was in hanging out in very bad light near a hollow.

I forgot to post the better picture of the female Lesser Scaup in the last clearing post.  I liked how the male is “acting” like he is asleep, but clearly keeping an eye on the prize.

We came upon this sighting while checking out a pullout on the main loop.  There were a few people there, but they didn’t really seem as interested as I was at what they were looking at – I on the other hand I was thrilled.

Hit the jump to find out what this is!

Did you figure out what it was?  Once again, the tele had to be deployed to bring it into view.   Here, this shot might help a bit.

That’s right!  An expecting Osprey family.  That was one impressive nest and guessing they have been returning to it for several years.  It blended into the environment quite nicely – the whites on their breasts gave it away.  Not sure who was watching who – us observing them…. or them trying to determine if The Beast was a threat to them.

The male would fly off from time to time and bring back some scrumptious morsels for the Mom – the chicks had not arrived yet.  I was lucky enough to capture one of the return flights.

Sorry, the next one is too soft – a byproduct of distance, tele and crappy execution.  You can make out that the male was making sure its nourishment was being maintained as well.  Can’t make out the victim – the head was gone.

We saw this Osprey quite far from the nest sighting above.  I doubt it was the same male unless its hunting zone was bigger than expected.  Something about these birds that make them look so stoic – Clearly the Eagle was the best choice as our national bird, but the Osprey should have been a close second.   Good thing Ben Franklin didn’t have his suggestion of the Wild Turkey picked – clumsy ugly birds do not give the same impression. 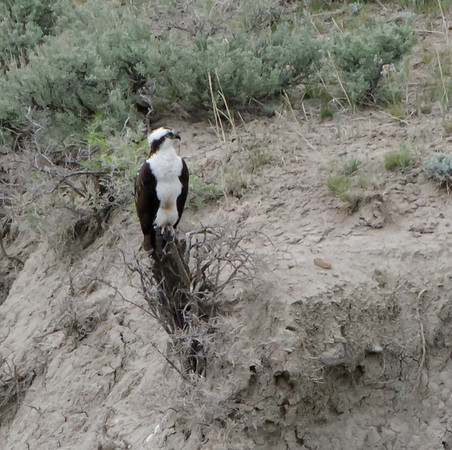 Okay, now things get more difficult.    Hoping my brother Ron can come to my rescue on the identification front.  First off, the one and only shot I was able to get in the tin for this bird.  It was cold with a wet drizzle that day so guessing it was fluffed up for warmth.    I have looked at all my reference books trying to classify this specimen with little luck.  I thought it would be easy with the tightly barred belly and the short unbarred tail.  Guess what, no good matches I could find.  So, consider this my first cry for help!

As you can tell from this shot it was almost sleeting when we spotted this specimen, thus the bad execution.  I did not get that all important tail shot but it does look to have some form of barring based on the below shot.  Heavy black on the bill and dark coloring around the eye.  Kind of leaning to a Swainson’s based on the breast and region .. but for the second time …Helllllllp!

Wait a minute.. wow, could that be a Peregrine Falcon juvi?!?!?  – can someone please try to validate this one – probably too good to be true, but that spotting combined with a dark tail and then streaked breast looks pretty close.  Fingers crossed.  On second look it might be  a Merlin based on the deep bend in the wings.  Anyway, take a look and let me know what you think.

Next up on the what the hell is it section…

heavy patches of brown on the breast with the full brown head would normally be a good clue to the Red-Tailed… but that non-barred and somewhat whitish tail is throwing me off.  Maybe Red-Tailed… just not sure.

The size of this one and the white spots on the back puts this next one also in the Red-Tailed section – I think. 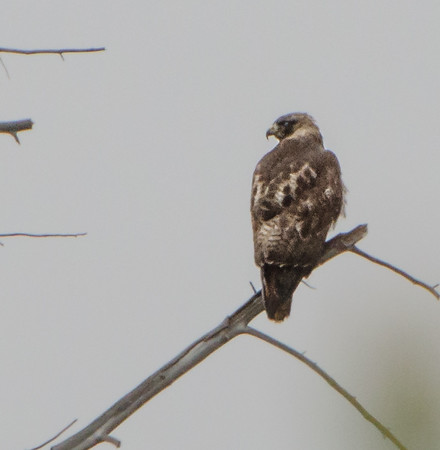 I can definitely tell you what the next one is!

That would be a fine Red-Tailed Hawk specimen.  We have a lot of these in our parts so they are pretty recognizable – even without seeing the red on the tail.

This one spotted me pretty quick and wasn’t too keen on my glass pointed at it.

One other way to tell quickly is the sheer size of this bird.  One of the largest – if not the largest of the Hawks.  I do know the females are bigger than the males – can’t tell for sure what this one is.  Eventually it grew weary of my presence and took off for a safer location.  This shot give a good view of the feathering down the legs and the underwing coloring.

There’s the tail that is so familiar to them.

This isn’t getting any easier!  Okay, I took the next one while standing out in a field looking at the Wolves shown in the previous clearing post.  It was doing circles overhead, but kept taking them further and further away from our location.  Was lucky to get a few quick shots before they were specks in the sky.

It does have the Buteos profile for a full sour – sweeping arc across the back of the wings.  The fan tail, the full wraparound brown head and the dark patches at the front shoulders gives the clues it is probably a Red-Tailed.  Their coloring is so diverse it is hard to pin them down.  It does seem to have a red tint in the tail shot below.

Going with that unless there are other suggestions.

Next up, an interesting example of what level of completeness is required to fly.  Admittedly, I only noticed the missing feathers in the darkroom – out in the field it just looked like a normal set.

My best guess it this sparsely feathered specimen is a dark morph Red-Tailed as well.  The fan out of the tail is very pronounced, heavy barring on the back of the wings and the dark body that merges into the front of the wings are good indicators.  Ron has a better reference book and might be able to confirm/contradict any of these predictions.

Next up … more crappy shots of Hawks. Full disclosure, this one raised up to take a shit – decided to spare you from the visuals of that.

Notice this specimen has heavy feathering all the way down to the feet.  Definitely showing some heavy white spotting across the back of the feathers.  According to my reference books, that appears to also be a trait of the Red-Tailed. Crap, can’t catch a break.  Basically, they are EVERYWHERE.

Good news, I can actually identify this little brown jobber – pretty sure it is a White-Crowned Sparrow.  The distinctive black and white head coloring is a dead giveaway and the lack of yellow coloring separates it from the White-Throated.  Per the region maps in Peterson’s, this bird is pretty common in that area.

Okay, not for the totally awful picture.

It might be a Yeti, but on closer examination it appears to be a duck.  I do already have this duck checked off my list – the Barrow’s Goldeneye – but left it in so you know it can be found out there if you visit.  They have a pretty narrow set of regions – mostly in Canada for the Summer, but spend their Winters down in the Montana region.  If you are out there, keep an eye out .. and hopefully get a better picture.

Well, that is it for the second set of Yellowstone clearing pictures.  Hope you enjoyed, and again, any help on the Buteos would be greatly appreciated.

4 thoughts on “Cleaning Out Yellowstone – Part 2”