Yesterday I managed to put up an 18 spot on the run counter.  In celebration, I cleaned up the house, scrubbed the bathrooms, vacuumed, gave the dogs a bath and steam cleaned all the hardwood floors in the house.  Believe that?  No!?!  I’m hurt.. but the truth sometimes hurt – not as much as my body hurts, which is why I simply thought about those things and then crashed on the couch – hehehehe.  Now I’m just going to sit in this comfy chair and bang out a new post for you.  Today’s topic is all about a birthday present to myself.  Back in January I took a day off from work and went birding in Emiquon.  These were the results of that day.

I was taking some pictures of Eagles out on the ice when all of a sudden I saw two Mute Swans out of the corner of my eye heading straight for me.  Although startled, I did manage to get The Beast turned in their direction just in time to get a few incoming shots.  They noticed the big glass pointed their way and diverted their flight. 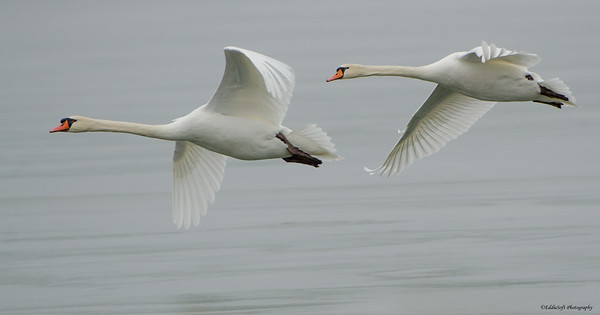 Predicting how this might end, I kept the camera pointed in their direction as they went in for a landing.  Sure enough, when they hit the ice they slid for about 10 feet.  I will give them credit, they rode out that slide like pros.

Hit the jump to view a few more shots from the birding day!

There were also a lot of Ring-Billed Gulls lurking about.  The day was pretty overcast making it difficult to really get the settings zeroed in.  Eventually managed to get a few nice ones in the tin.

For those wanting the top view of the wings to verify the identification, here’s a parallel shot that shows the trademark grey backing and the black dipped wings.  In this case, the ring on the bill pretty much gives this one away.  Definitely better shots than I previously had in my Bird List so that was an upgrade for the day.

This White Pelican was hanging out on a Muskrat home.  It was looking pretty stoic so ended up walking a ways down the highway in order to get a decent shot.  The risks I take to give my readers the best shots possible – ha 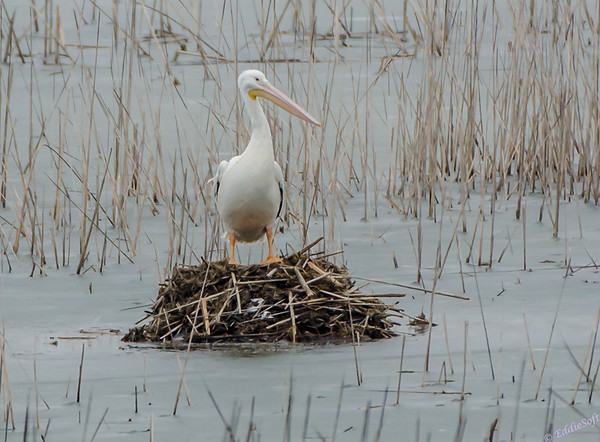 This promptly produced the second startle of the day.  Eventually the Pelican decided to go find better company.  Something seemed a bit odd when it flew off,  but I was concentrating on getting the eye in focus and making sure the manual settings were somewhere close.  It wasn’t until I was chimping at the LCD screen when it was realized that it had a chunk of feathers missing.

Shocking that it could fly at all yet it showed no signs of difficulty.  Not sure if they molt or it had a nasty run in with another predator.  Glad it survived to live another day.

On the way back to the truck, a large semi ended up coming a little close to where I was walking.  The gust of wind it produced took me a bit off balance, pretty much pissing me off since that was the only vehicle on the road at the time.  Mid-cuss under my breadth I noticed an interesting shape in the levee across the highway.  Maybe that was a stroke of luck.

This adult Eagle was busy chowing on what appears to be a feathered carcass.  Guessing the frozen water prompted it to look elsewhere for nourishment.  It didn’t hang around long – just enough for me to get a few good shots and Frogger my way back to the truck.

The next couple of shots were really far out there.  Didn’t bring the tele with me that day so The Beast was pressing to get any decent shots.  Really liked the composition of this one – the full size is way too soft.

Lastly, another shot of an Eagle out on the ice.  This was what I was taking a picture of when the Mutes came in for a bombing run.  Not sure why it was hanging out there – doubt it could have broken through the ice for any prey.  There was a small channel further out where about 20 other Eagles were hanging out. 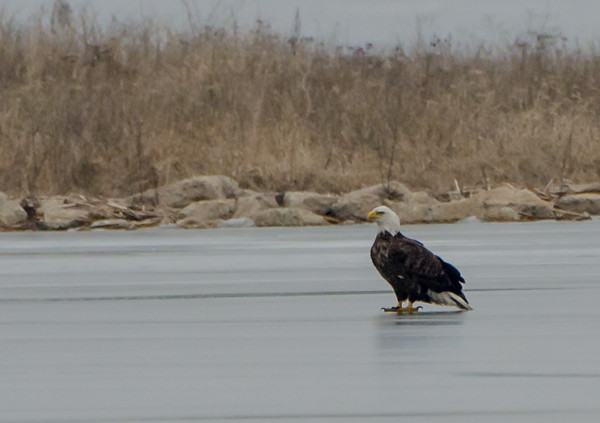 All in all, not a bad birding day.  Was a little miffed that Emiquon closed off half of their refuge to both car and foot traffic.  Three Eagles were taking advantage of this privacy – mocking me, if you will, at my inability to get them in the tin.  Next time!

3 thoughts on “A Cold Day at Emiquon”