Another post from the great north with some good news to share.  Linda has now made it through her four surgeries and has been officially discharged from the hospital.  “Hip Hip Hooray!”  I’ve been through a number of “situations” over the years (unfortunately, many of them self-induced).  Some of those bumps in the road took just about every ounce of fortitude I had to get through.  Even with all that, I have to bow to the resolve Linda has shown over the last 4 weeks – three of which has been spent up here in Viking territory.   Weeks of being poked, prodded, sliced, sawed, cracked, studied, sampled, wired, tested, extracted, stitched, scanned, radiated, incubated, anesthetized, sponged, pressurized, cauterized, medicated, IV’d and worst of all bombarded by some of the worst TV shows imaginable (think marathons of Yes to the Dress, Millionaire Listings and in the I’d rather beat my head with a hammer than watch category, Below Deck private yacht cruises).  I can’t even find the words to convey how proud I am of her up with all that and staying positive even though she has many more months of recovery ahead of her.

On a personal front, just glad I do not have to write up the latest +1 to my birding list from a truly uncomfortable folding hospital chair! 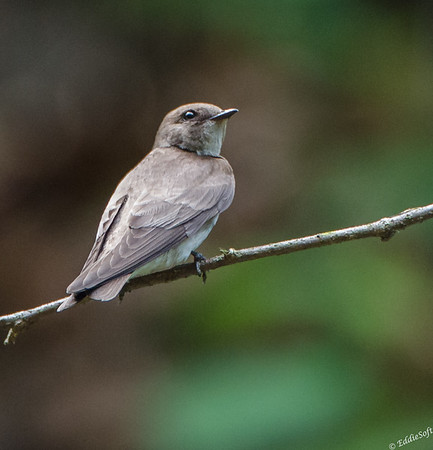 Many of the plus ones as of late (well, to be honest, most of the posts this year) have come from birding trips to fiscally more responsible states than Illinois.  In a change of pace, today’s featured feathered friend comes courtesy of a trip up to Starved Rock State Park which is a relatively short drive away.  Ron and I had the opportunity to do some birding together back in May 2015.  Not exactly the best weather as we were drenched by morning showers and it didn’t really lighten up much the rest of the day.  Any shots deep under the tree canopy required dizzying levels of ISO and significant time in the digital darkroom.   We still managed to have a lot of fun as is always the case when out with Ron in the field – even managed to get a few new feathered specimens in the tin.  The Northern Rough-Winged Swallow you see before you is one of those new additions. 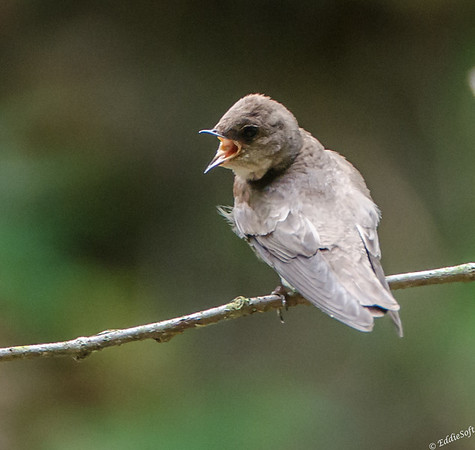 Hit the jump to see and read a bit more about our uniquely textured Swallow.

You might notice a common theme throughout this set of pictures.  Every specimen was captured while “on the wire” as they say in the birding world.  These birds fit into my HaH classification, or Hyper as Hell.  It needs to be early in the birding day for me to get a Swallow in flight with The Beast.  By the end of the day, my arms start turning to jello hand-holding my field rig. Trying to track one of these … or any Swallow for that matter, is futile at best.  Eventually you just open up the stops (or technically reduce the 1/f’s) then press and pray.   No way that was going to work with conditions that day and thus the perched only specimens. 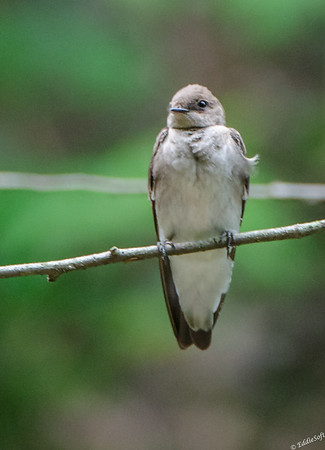 Truth be told, I’ve actually spotted the Rough in several locations.  This is one of those birds that are bit hard to really confirm in the field.  much like a Sparrow, this species of Swallow is pretty dull compared to the rest of their family.  With exception of the Bank Swallow, the rest of them are pretty ornate ranging from greens, to blues, to violets and everything in between (link here and here) .  Luckily the Bank has band on the chest which doesn’t appear on the Roughs.  The Bank also has a forked tail compared to the more squared one here.  Of course you can’t really tell that until they are in flight and we already discussed the issues there.  The good news is the Northern Rough-Winged Swallows should be easy to spot anywhere in the US as their breeding grounds cover all the contiguous states.  They will push down into Central America outside those seasons.  Like many Swallows, they tend to hand out near waterways and provide us a great service keeping the flying insect population under control. 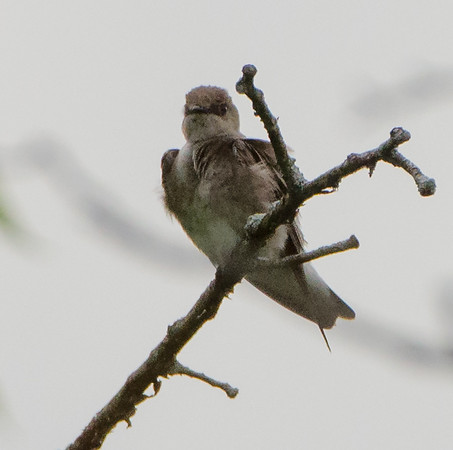 Per Cornell’s website, these Swallows tend to fly slower and lower to the water than the other family members.  I didn’t find this to be a helpful identifier as they seemed equally adept in the air – maybe if you saw them flying together you might be able to discern the difference.  I always wondered how they go their name and thanks to the research for this post, that mystery is solved.  The leading edge of their wings apparently have tiny hooks which gives a feel like a file if you are lucky enough to have on in your hand.  Certainly nothing you are going to be able to tell in the field, however, they do have a “dirty” breast coloring which helps set it apart from the the other Swallows.  Really a process of eliminated when it comes to Swallows.

Out of pictures and out of interesting facts to share at the moment.  Going to call it a post, enjoy a bit of “quality” TV (there’s a Purge marathon on tonight).  More importantly, looking forward to the first chance I have had to get a full night’s sleep in a long long time.  Cheers everyone!

9 thoughts on “Rough to the Touch”