Howdy everyone! It feels like it has been ages since I have had the chance to take a quick break and spend time putting up a post. Just in case you were wondering, Linda is progressing very rapidly. The first week or so was a bit rough adjusting to the recovery protocol – Linda doesn’t take well to just relaxing requiring me to continually remind her she just went through major surgery and needs to give her body time to mend. She started cardio rehab this week which I think is helping her a lot, if nothing else freeing her from the confines of the house. If that wasn’t enough, the calendar turned over resulting in a “holy crap it’s time for the annual Halloween Trail event” panic. It seems like it is so far away and worry free until wham, you have only weeks to go with sooooo many props still to build. When the opportunity to post between all the training (two halfs in next 7 days), taking care of Linda and now Halloween prep.. you take it. Going to be long on pictures today and short on text – luckily today’s featured feathered friend is quite spectacular. 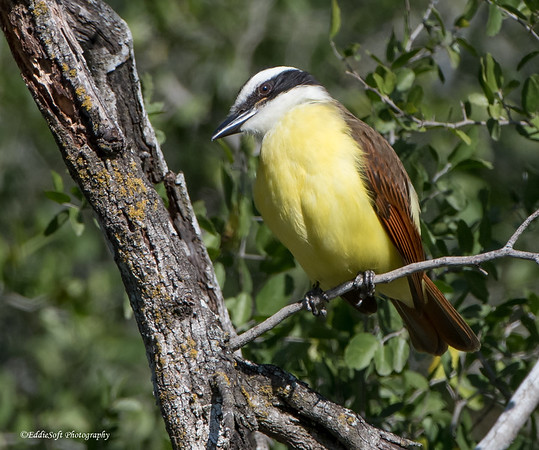 Nor is this bird camera shy. When you got it, you might as well flaunt it. This beautifully colored bird is called the Great Kiskadee and is right up there in my top 10 attractive birds that I have been able to get in the tin. The Painted Bunting (link here) still holds the top spot, but the Kiskadee is not far behind. It may not have the diversity of palette the Painted does, but the whites, blacks, yellows and chestnut are perfectly coordinated and a testament to the skills of Mother Nature’s interior decorator. There are also some secret colorings I didn’t even notice until several encounters later. They are a bit selective when they show that.. but more on that later. 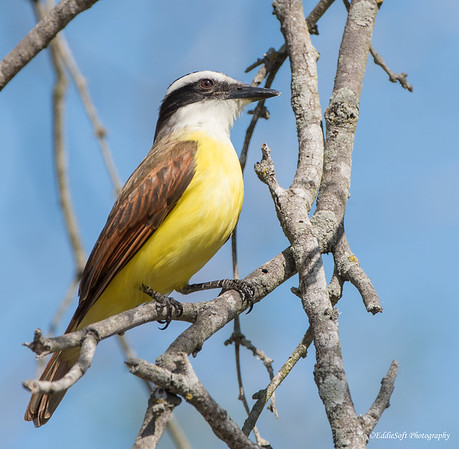 Hit the jump to view a lot more pictures of our Bentsen-Rio find.

This particular Great Kiskadee specimen was spotted while visiting the Bentsen-Rio Grande Valley State Park back in December of 2017. This was the first time we had gone westward from the Texas Gulf Coast, basically following the Rio Grande River as it defines the Texas southern border. Definitely an area that has been getting a lot of press as of late and not a place to be if you are not comfortable with your ability to be responsible for your own protection. Bentsen-Rio Grande Valley State Park felt safer than some of the other places we had visited – Sabal Palms Sanctuary is the place I felt the least comfortable (link here). This might be due to the strong presence of green and white SUVs and helicopters that kept a vigil watch on the surroundings. 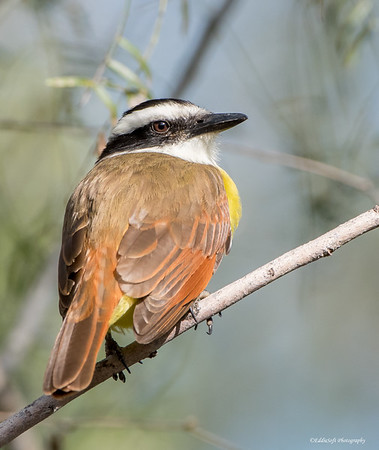 However, if you are a birder and want to see some of the most impressive specimens that world has to offer, you will want to make your way down there. Although Ron has long argued that some of the species available to you down there do not really count as North American birds as they just barely cross over the boarder to visit distant relatives, watch a rodeo, enter barbecues contests and on special occasions show off to the visiting birders. Ron contends these are just “visitors” and should not be considered +1’s. After careful consideration of this argument by the Doerfler Birding Rules Governing Body or the DBRG for short, this proposal has been flatly rejected. I was a bit worried there I might be swayed enough to change my mind, however, end the end I was unable to convince myself to give up all those +1’s already in the tin. Sorry Ron …hehehehe. 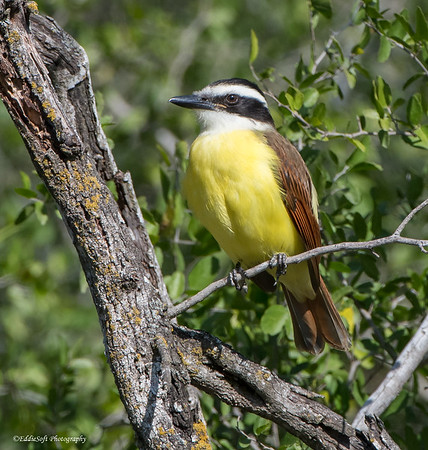 The Great Kiskadee is one of those birds that Ron would classify as a visitor. It is primarily resident in Central America and most of South America. If you look real close at the region maps you will see it just touches the southern border of Texas where Bentsen-Rio happens to be. That means you will need to travel to get a live look at one of these impressive birds. As much as Ron doesn’t want me going into California, I can assure you the last thing I need is for Ron to head down to the Gulf Coast as that would assuredly kill any chance of me catching up to his bird count. 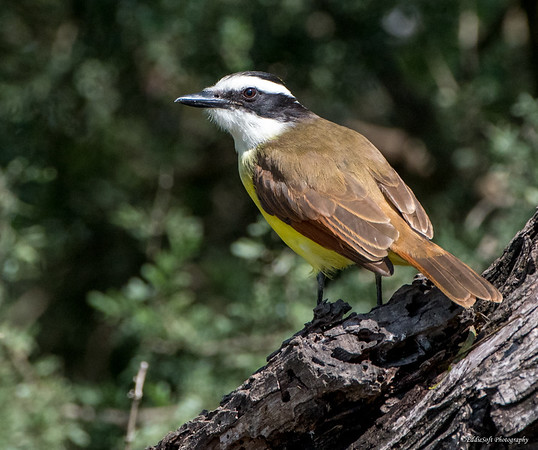 Speaking (err, rather typing) about bird counts, this post does not represent a new +1 one for me. The Great Kiskadee was first featured back in February 2018 (link here). It marked the 200th bird in my list back then giving it a special place that will forever be remembered – pretty sure I was cramming as many bird posts I could get to ahead of a talk given on birding the Texas Gulf Coast at the local Audubon Society. On that previous encounter it was very clear this species is a camera ham. Much like the Burrowing Owl, these Kiskadees display a number of different postures and looks that will likely bring a smile if not an all out laugh if you get to spend any time with them out in the field. PSA, if you have to, at least try to keep the laughter to a reasonable level, I find other birders get a bit torqued if you manage to be the catalyst for the bird they all have their cameras pointed at suddenly taking flight. Like hiking in bear country it is always preferable to have someone else with you…that you can sacrifice by pointing at and falsely accusing or kneecapping in the event a bear shows up. 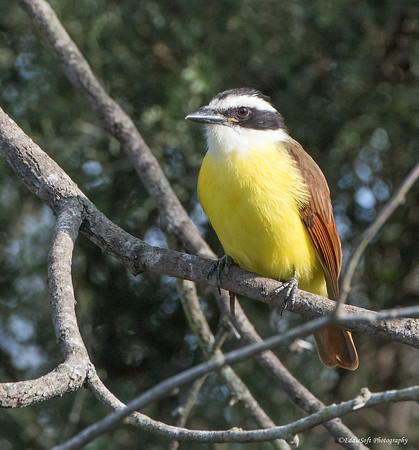 The nice thing about Great Kiskadees is they are very vocal. If one of them is in the area you will more than likely know it by ear alone as they will deliver quite the racket. The name Kiskadee was actually derived by the three syllable name that they supposedly emit. Note, I did NOT get that vocal impression from the times I have been around them. Sounded a lot more like the cries for help from the stuffed Lamb Chop toy our youngest dog enjoys mauling. When I read that I immediately went to Cornell’s birding reference site to verify. Even they seemed skeptical of that association per their comment “which someone thought sounded like KIS-ka-dee, though many choose other descriptions”. Count, me in the latter camp, although they would probably be just as dismissive with my “Lamb Chop murder” suggestion. 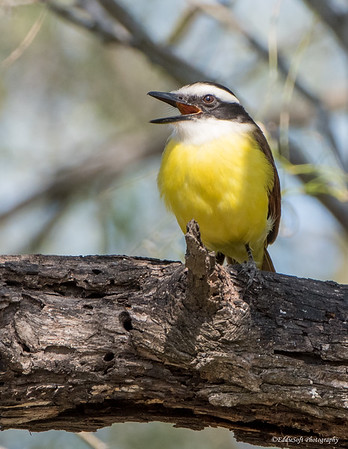 The bad thing about these birds is they are … very vocal. Sure, it is easy to find them this way, but once you spot them and then try to spend time getting decent shots in the tin you will soon be popping Tylenol to get your head to stop pounding. You can only listen to a murder of an innocent lamb so many times before you start getting a headache. To top it off, these specimens were hanging out with a number of Green Jays (link here and here) which are equally vocal.

Earlier there was reference to a hidden color feature on this particular bird. If you take a gander at the series of shots from the previous post, you will like come away with the impression their head coloring consists of a black cap and a black eye stripe that wraps around the back of the head. In fact, that is pretty much the same impression you will get from the shot above. It was not until this more recent series of shots that another adornment was spotted.

Again, did some follow-up research on my go to Internet reference spot (Cornell). Not a single one of their pictures show this extra yellow stripe on the top of their head. Further investigation led to the discovery that they do not even mention it in their ID description stating only their black head was highlighted with a bold white eyebrow – an interesting perspective as I had characterized it as a white head with a black cap and black eye-line. The yellow line goes all the way back on the top of the head per the shot below. 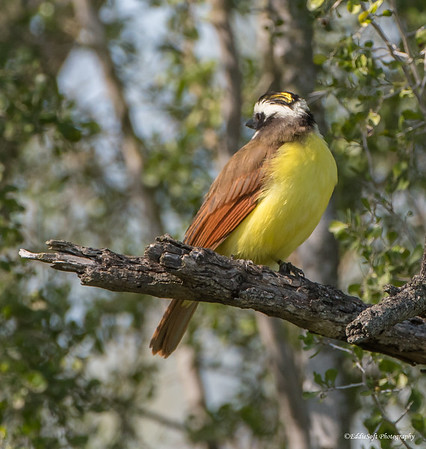 So there you go, a secret bit of bird knowledge you can use to quiz or impress your fellow birders the next time you are out in the field. Should also note these last couple of shots really show the chestnut/reddish brown on their wings and tail. It was also mentioned earlier in this post the different posture these birds can take on while clearly working it for the camera. The following shot I call “I’m BATMAN”.

Then there are those times when it fluffs its crown and looks more like a Pileated Woodpecker or a Roadrunner than a Flycatcher. 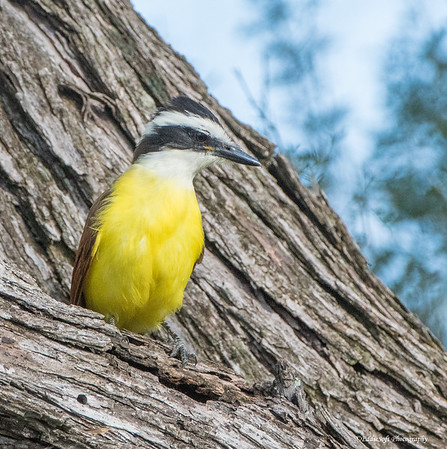 To appease Ron and his endless requests for “more angles, more angles”, here is the backside of the largest of the Tyrant Flycatchers. Pretty much brown through the interior, but as shown above, the outers will show a chestnut hue when properly angled into the light. The head will still give it away from this angle so not a bird you have to spend a lot of time buried in reference books trying to identify regardless of what angle you manage to get in the tin.

In closing, thought I would bring you the interesting fact that the black eye-line is both functional and decorative. Similar to the black lines used by athletes, this color stripe is said to aid them by removing glare while hunting during high light times. What until they discover Ray-Bans! 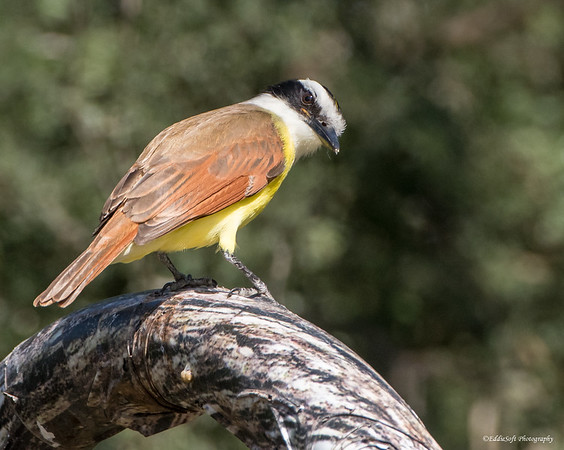 “Where you just photographing my ass?!?”

Time to call it a post folks. Need to go roll out the legs for tomorrow’s big race (first long one since passing out on the 50K course back in July). Wish me luck, it is going to be a long morning on a difficult course – still not back all the way yet as the body’s thermostat is still panicking on long runs in the heat – only time will get that back under control.

10 thoughts on “Another Lamb Chop Murder”