Hello Everyone, Happy “Spend Lots of Money on Your Significant Other” Day or minimally shower them with affection and let them know how important they are in your life (the latter being a hell of a lot cheaper .. just saying). So a few posts back I mentioned that I had already selected the featured subject for this special day. That foreshadowing resulted in Ron spending every available minute from that point on theorizing, hypothesizing and speculating on what I would possibly select to represent SLoMoYSO Day. He actually had a few good guesses, but failed to put two and two together even though he already knew what birds were in my queue. Granted, his guess of a Vermilion Flycatcher (link here) would have definitely been a fitting tribute to the traditional color of the day, I went with another option – one that is making its debut on the blog. 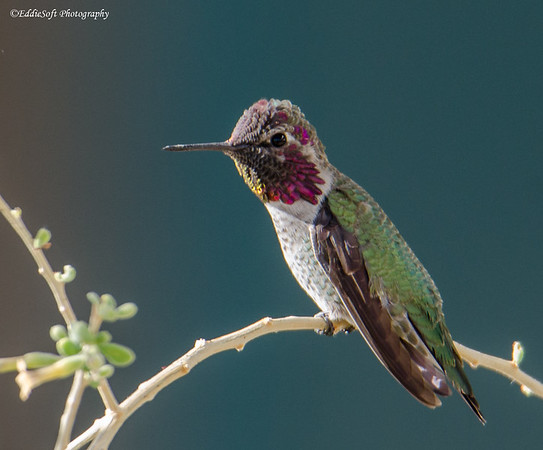 So instead, we load up the RV and head out to better locations. Las Vegas happened to be the spot where this specimen made it into the tin. Over the last Thanksgiving holiday we headed out to Red Rock Canyon National Conservation Area to see what we could find being already elated to have checked off the Costa’s Hummingbird the day before (link here). While coming out of the Visitor Center I noticed the unmistakable sound of a Hummingbird blasting by with full burners engaged. Challenge accepted. This proved to be a bit more difficult than usual thanks to choosing to leave the Beast at home and rent a 180-600mm from a local camera store. Although it was definitely lighter than the Beast, the focus was incredibly slow making in flight shots impossible. All was not lost, just needed to wait until these sugar freaks took a break.

Hit the jump to discover why this little bird was chosen for V-Day.

After a bit of trial and error, figured out the preferred resting spot for this particular specimen. There was a group of small trees between the buildings that provided a perch with a clear view to the two feeders he was defending to the death. Anything that had the audacity to try and procure a drop of nectar from either one of them launched our little jet into full out war. For those that are new to the Hummingbird traits, they may look cute, but they are pretty vicious when it comes to defending their territory – this trait is NOT why I selected this particular bird – nope, this particular species has another feature that made it a perfect choice – imagine my surprise when it went from this look…

…to this look with a simple turn of the head. Johnny flame on in a split second.

There are a few times I’ve been absolutely stunned while photographing a bird because of some unexpected behavior or feature that made my heart skip from sure surprise. This is one of those times. I am very accustomed to the Ruby (‘cuz I live in the Midwest), but those beauties have nothing on the Anna’s Hummingbird. When the sun hits their iridescent feathers just right, they burst with an incredible pink hue which is something we traditionally think of when it comes to the 14th day in February.

How about we see that again (albeit with a slightly soft flame off shot).

Turn that head back just enough to catch that Vegas sunshine and next thing you know it’s squeaking out a high pitch “Suck it Ruby”.

This particular Anna’s was sporting its own Valentines jewelry. If you look real close at its right foot, you will notice a silver band. Admittedly, I did not notice this tiny band until back in the digital darkroom. At first I couldn’t make out the whole ID due to the large numbering and the tiny size of the band. Thankfully I had taken a couple hundred shots of this new bird – new bird, completely new glass, wasn’t going to take a chance and screw this up – snap away. By going through every one of those pictures, I was finally able to put it all together J84500. Excited to get another certificate, jumped on the web to submit the sighting. The excitement quickly subsided when a notification on their website informed that reporting was currently suspended due to the government shutdown – dammit!

Oh well, there’s plenty of time to get that registered. For now, just going to enjoy the shots and recall how much more brilliant it was in person. Linda also gave it the thumbs up and trust me, it has to be a very special bird if Linda thinks it’s worth spending time on. 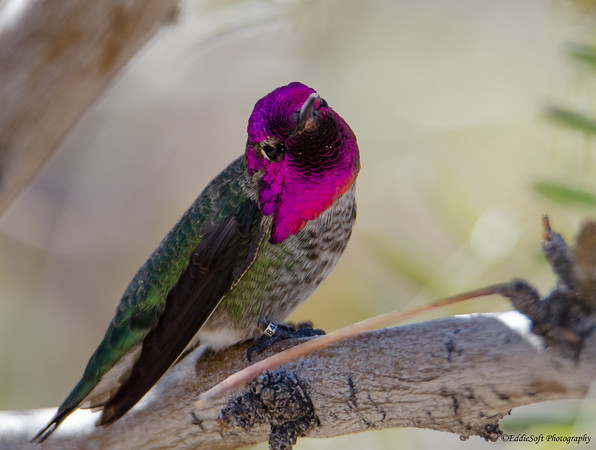 Better get to some interesting features before I run out of shots. First off, the Anna’s Hummingbird can be found in Illinois – No? Couldn’t get that one by you – sorry, you should already know that is a lie. The Anna’s prefers hanging out on the West Coast with a small movement into the Arizona and southern Nevada region. Just to put your own courtship efforts in perspective, these little guys will climb up to incredible heights (~130 feet according to Cornell) and then dive straight down before pulling up a few feet from the ground with a startling squeak. A simple peck on the cheek doesn’t do it for the female Anna’s. 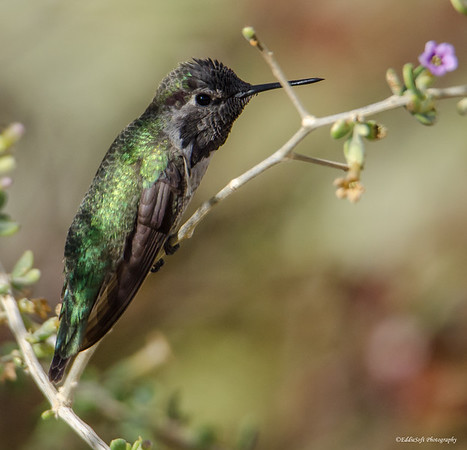 Continuing the Valentines theme, a group of Hummingbirds has a number of different names the most fitting being a bouquet (shimmer and glittering are a couple of other names). If you read the Costa’s post, you already know the male’s colorful neck is referred to as a gorget although in this particular case the Anna’s possesses more of a complete hood compared to the localized neck region of the Costa’s and Ruby. You might also be interested to know the Anna’s legs are really only good for perching being too small to walk or even hop.

Better wrap this up, I have to go figure out a way to fly to a 100 ft in order to impress Linda. To make sure you get to experience the complete bird, here is a view of the emerald colored back. 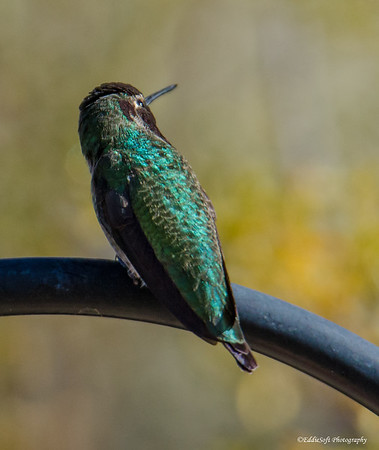 I hope you enjoyed your Valentine’s gift – actually it is more of a gift to myself since I can officially add the +1 to my list.

Take it easy everyone,

12 thoughts on “Happy Valentine’s Day from the Birding World”