Once again the white fluffy stuff is coming down. Luckily the accumulation has been manageable so far and not one to complain since it means our wells will benefit as it melts off in a month or so. Unfortunately, not the best of timings as Linda and I had to renew our qualifications on the range this morning. Last time it was also snowing, but 2 degrees (F) out making conditions completely miserable. Still chilly today, but definitely better. Now that the fingers are all warmed up, figured I’d bang out a quick post (bad pun). Decided to wait on the previously planned post and continue with the Valentine’s theme. This was mainly due to a few people asking for details on how our annual “Date Night with a Skunk” went. 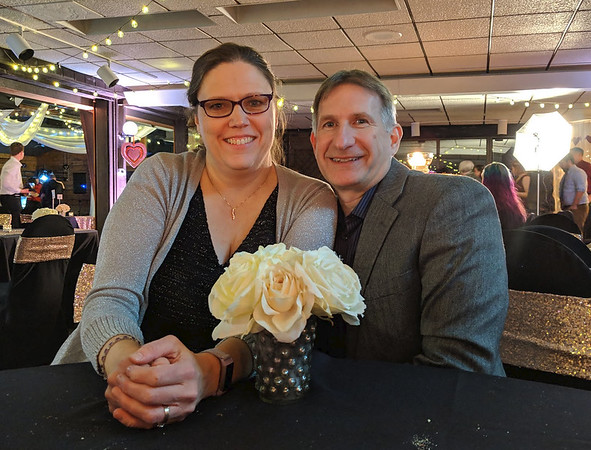 Quick background. We are members of Wildlife Prairie Park, a now privately owned park focused on the wildlife historically common to the Midwest. They have a number of captive animals and birds to enjoy and really nice grounds for walking, birding, mountain biking, trail running etc. We happen to volunteer there helping them photographically chronicle their progress on a new bird related endeavor they embarked on last year (3+ years still to go on that). This park used to be owned by the state, but since Illinois is essentially a fiscally failed state (scratch the “essentially” and just go with it IS a fiscally failed state), some private investors ended up taking it back and turning it around. One of their annual fundraisers is an elaborate Valentine’s dinner complete with drinks, dancing (if you are into that), 5 course meal, door prizes and you guessed it… an evening with a local resident Skunk – a play on the love stricken Pepe Le Pew cartoon (not sure this cartoon fits in this day and age anymore). For several years now, along with some friends we have been attending this event and yes, getting our pictures taken with an absolutely adorable Skunk. Just in case you are wondering, de-scented and basically a domesticated version of their more common wild brethren that have a habit of causing neighborhood dogs to get tomato soup baths. Our friend Sung took our pictures above before the night took on an unexpected elation moment only to result in a major disappointment.

Before I get to that, let’s shift to the real feature for today’s post. 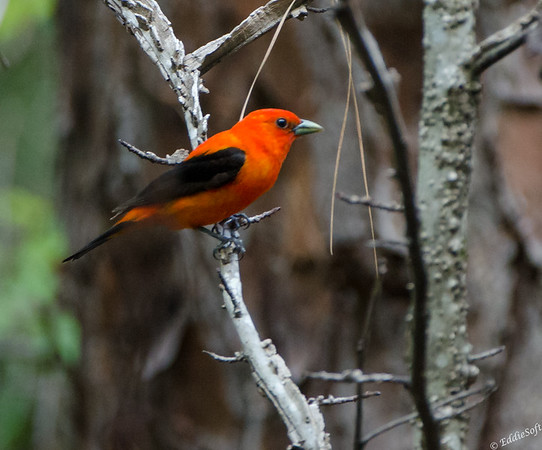 Hit the jump to see a few more pictures of the featured bird and find out how the dinner party went.

This rather colorful bird was the runner up for the Valentine’s Day bird post. A distant second, due to the fact the Anna’s Hummingbird (link here) is far superior when it comes to brilliance. On its own, The Scarlet Tanager is no slouch. They are typically more tuned to the bright red hue, but this particular male specimen was more on the orange side. The shooting conditions had a bit to do with that being that it was taken in a very dense forest, but still orangish to the naked eye. 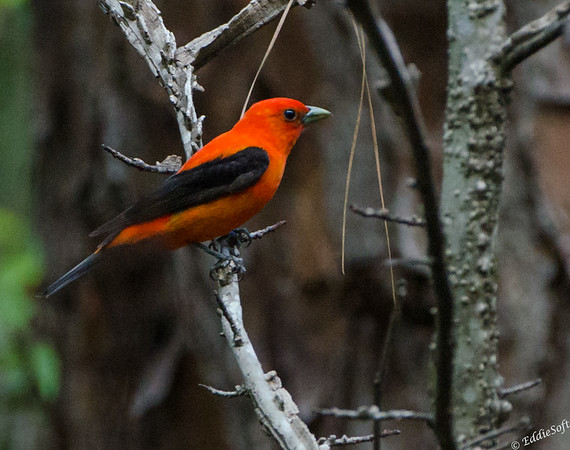 Sorry for the high grain shots. The ISO was cranked well beyond 1600 (most of these at 3200) just trying to cut through the darkness. Definitely not a series that is going to be making it on the wall for sure. However, these shots are still a LOT better than the series that initially resulted in this bird being checked off the list (link here). Not only were those shots horrendous on their own, the specimen itself was either soaking wet, going through a molt or dealing with a serious mite issue. Always good when you can improve on your reference shots even if it is just a little bit – no worries, next time I’ll get to try even harder. 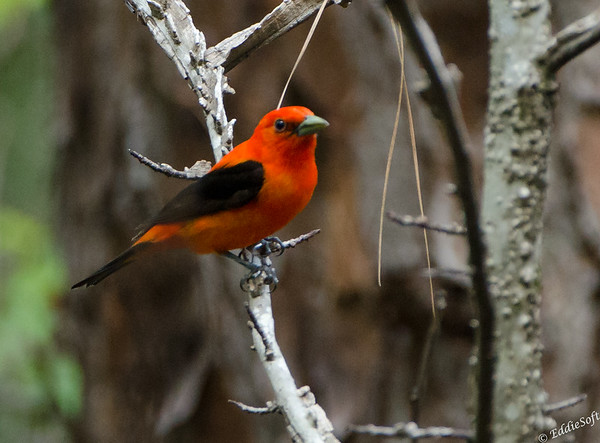 Ever have one of those times when you just can’t remember where you were even though you have a multitude of clues that might get you in the general area and no matter how much research you do, no matter how much you grill your event coordinator (read Linda) and after pouring over countless evidence (read 1,000’s of pictures), you still can’t figure out where the hell you were? Welcome to the life of birder with a 4 year backlog of wildlife shots. Most of the time this isn’t an issue. I either made sure to take a picture of the signage at the location or saved the itinerary. That and my memory is generally pretty sharp when it comes to birds regardless of the duration – remembering to take out the trash… not so good. All I can tell you is we were likely in Georgia at a wildlife refuge that advertised having my nemesis bird the Red-Cockaded Woodpecker. I’ve been all over this country looking for that damn Pecker with ZERO luck (found plenty of their nests – not a single specimen has yet to make it in the tin). I know we were there to get that bird when this Tanager decided to fly in ahead of me on the trail – perch there for less than 5 minutes watching me before heading back into the blackness. If I ever figure out the exact location, I’ll come back and update this post (crap, I think it is trash day).

Left this finger painting equivalent shot in so you can get a very poor view of the back coloring on this bird – and Ron likes as many angles as I can give him. It is more typical for them to have more of an orange hue on their back feathering (sharper blacks on wings though). 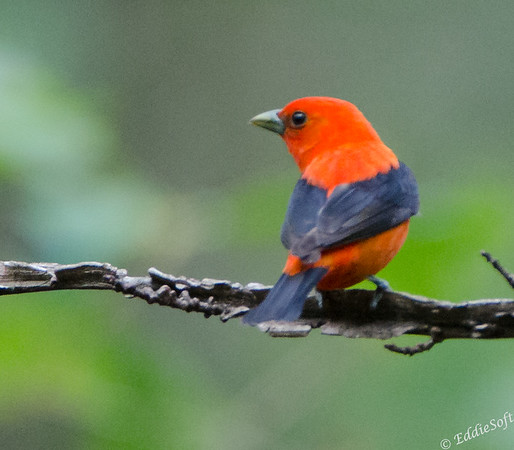 Some quick facts. The Scarlet typically hangs out in the Eastern half of the US with a small bleed into Canada then down the Central America coastline and in the Keys for winter for some heavy partying on the beach. They are also victims of the number 1 bird on my hate list – the Brown-Headed Cowbird, a notorious brood parasite. The female Cowbird will removed the Tanager eggs and replace with one of her own. Apparently the female Scarlet is colorblind since it is unable to distinguish that it has been had (or too embarrassed to admit her fling with the UPS man). As a result, it is forced to raise the much larger bird as if it is their own.

Now with that depressing tidbit, I’ll finish up the disappointing Skunk story. Upon our arrival at the event, it struck us as odd the Skunk wasn’t there to greet us and escort us to our table as in the previous years. Not only that, the Skunk was nowhere to be found. Hmmm, kind of hard to have a dinner with a Skunk when there isn’t a Skunk. The photo area was set up (top right of shot) and everything else looked familiar. Got caught up in the drinks and food and didn’t think about it until I saw a hostess come out to the photo area – to our surprise she wasn’t holding a skunk but rather a BARN OWL. Guess what few things are better than a Skunk … that’s right, a BARN OWL. That would be my moment of elation. Not only do I not have a BARN OWL (nor Ron), I definitely do not have a picture of myself next to one. We were finishing up our meal and figured we had some time before the line would form to get the pictures. At some point I looked over and noticed the hostess was struggling a bit as the Owl was flapping its wings and looking downright agitated. After a bit, she moved to a more secluded area of the room and attempted to calm it down – oddly enough with a feather she had in her other hand. It eventually folded its wings in and sat there jerking its head at the multitude of sounds it was being bombarded with. Eventually the hostess took the Owl out a side door and never returned. Later we found out that it was overwhelmed by the lights and sounds and was too stressed to keep him there (which I completely agree based on what I saw). In a matter of ~2 hrs I had gone from disappointment to complete joy and then back to completely bummed. No Skunk and now no Owl.

Noting my letdown, my friend tried to cheer me up with a quick mod of the picture he took. 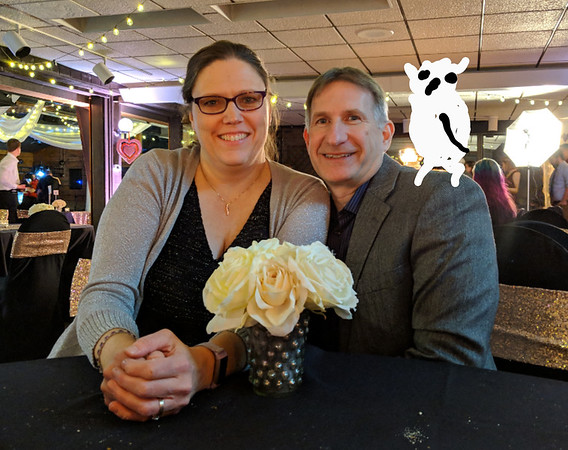 That cracked us both up. Not bad for someone who doesn’t draw and made it up on the spot – although in jest, I did tell him it looked more like a Great Horned Owl than a Barn Owl but nonetheless was a hilarious gesture. In the end, this is really about helping to raise money for Wildlife Prairie Park. We still had fun and I definitely left my comfort zone when it comes to food – even tried mushrooms and a few other items I am sure was not intended for human consumption.

Oh well, hope you at least enjoyed seeing some shots of the Scarlet Tanager. Unfortunately, I already have a shot of the Great Horned Owl so I will not get a +1 for that night ha!

10 thoughts on “Scarlet for Valentine’s”