A friend of mine has been getting me all teased up for a vacation trip to Hawaii. He is headed there soon and busy pointing out all the birds from that region he’s already managed to get in the tin. Linda and I had plans to go there for our 25th wedding anniversary, but we ended up postponing it due to other commitments. Every year since then we have tried to plan a makeup trip – again to no avail. Last year we decided that this would be our retirement gift to ourselves and put the trip on the shelf until we decide it’s time to divorce ourselves from the daily grind. So every time someone mentions they are heading to the islands my fingers get all twitchy like, a tick develops in the shoulder and my eyes start to blink uncontrollably until I make Quasimodo look like GQ material. They have some stunners of birds there that I need to see… damn, there goes that twitch again. Oh well, I can at least live vicariously through my friend’s captures until we decide to turn our badges in. You’ll be mine Red-Crested Cardinal .. some day… some day. Until we get to go island hopping, I can still continue hunting for all the continental US birds that still continue to elude me. Today’s featured bird first fell victim to my hunt back in December 2015 (link here). 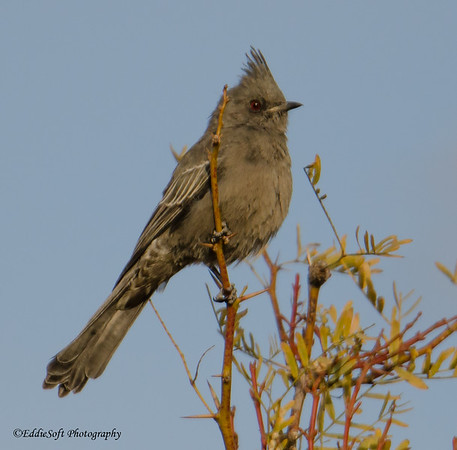 Wait.. ummm, a little late on this, but for those that might be slightly concerned over wildlife with red eyes, you might want to be cautious – the light on these shots were not as conducive to getting the nice red highlights, but they do possess the dreaded early morning Vegas eyes. If you recall back on that initial encounter, we were at Corn Creek Visitor Center outside Las Vegas, Nevada. While birding the Mojava Desert over New Year’s, we found a Phainopepla hanging out at the top of a tree. Those shots had to be heavily processed to account for horrible backlighting. In oddly similar manner, we discovered this new specimen. Like before, we were in Vegas, in Late November (close enough to the New Year’s timeframe), and once again it was sitting at the top of a tree in horrible backlight. 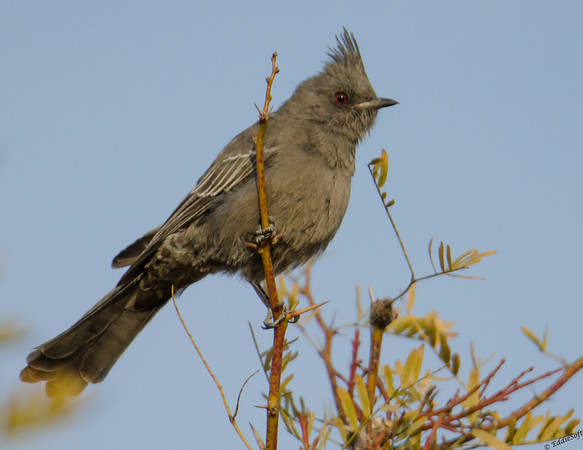 Hit the jump to read a bit more about the shoot.

There were some differences. This new one was located on the other side of Vegas at the Wetlands Park Preserve in Henderson and I was able to address some of the lighting issues with serious use of the foot zoom. I probably followed this particular bird for 40+ minutes desperately trying to get an angle that cut down on the harsh sun while still giving a relatively clean path to the target. Linda can probably give you the exact time down to the second I spent trying to get a decent shot of this bird in the tin. When she found out I already had it I think she threatened to take the Beast and beat me over the head with it – thank god I can run faster than her. She calmed down a bit when I informed her my original shots left a lot to be desired and was just trying to give my readers a better experience…okay, I lied, that did nothing to calm her one bit. Hey, there’s another similarity – I also lied in my first post when I said Phainopepla was Latin for Evil Cardinal. 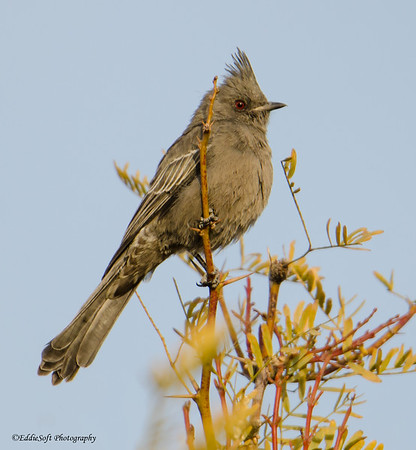 As I cleared up in that post, the name is really Greek for Shining Robe. In case you are asking yourself how that name applies to this specimen, it is named after the male adult plumage. The females have the more drab grey. Both the adult male and female have a red eye and the spiky crown – the punk rocker of the birding community. I still think they look a bit evil and might have to consider putting a few of these out on our annual haunted trail. 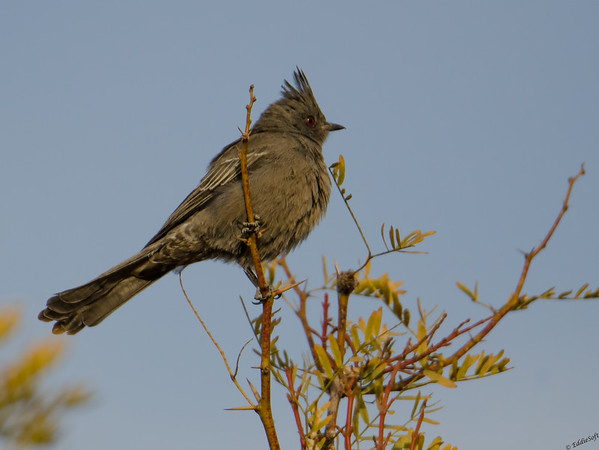 As I mentioned, getting this female in the tin was a definite chore. At first we couldn’t locate it. I’d hear a fairly high pitch whistle then a fairly loud twill coming from the thick bushes. Then I would hear a wurpy like call coming from a different area. I’d run over there only to have it turn back into a high whistle and in some cases something completely different. Extremely frustrating not being able to pinpoint the source of the calls. All of sudden it flew out and over to the top branches you see in the photos. That is when I discovered all those sounds were coming from the same bird. According to Cornell, their songs have over 14 different parts and when pursued by humans can mimic the calls of other birds. Clever bird, but not clever enough to evade my shutter. Getting a clean shot ended up taking most of the time – every angle I tried ended up having brush in the foreground. In the end couldn’t do much about that, but for the most part was able to keep them fairly clean with the exception of the tail area.

Time to call it a post – we are heading out for our traditional Valentine’s dinner with a Skunk (yes, a real one).