Greetings everyone! Back from my trip up north and therefore now have access to my personal bird reference library. What to do, what to do… oh, how about a post featuring another new check on my North American birding list. My count has received a serious steroid injection this month thanks to some very productive trips to the Lone Star state. 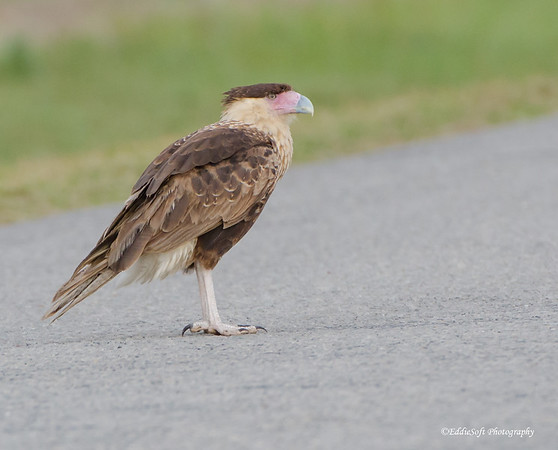 This particular find was encountered while visiting Rockport, Texas back in December 2016. Specifically, this was located in a small coastal neighborhood near Goose Island State Park. We became acquainted with this area thanks to a very friendly and helpful hotel clerk we befriended on a previous trip to Aransas National Wildlife Refuge. We were bummed we had not spotted a particular bird while checking out the refuge earlier in the day. Noting our disappointment she bestowed an extremely useful piece of information. We’ve been every visit since then. 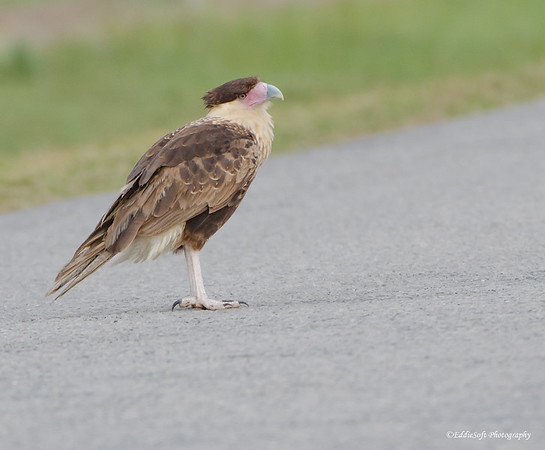 Hit the jump to read more about “The King”

Unfortunately, we were met with a very disheartening scene upon our return last December. You are likely aware that after a long absence the mainland has taken some hits from hurricanes. The Rockport/Aransas area took a direct hit from Harvey. We have had the misfortune of witnessing the aftermath of tornadoes living here in the heartland. This is the first time we have experienced the destruction that can be leveled in this deadly weather event. I’ll talk about it in detail when I get to those newer shots from our recent trip, but one of our favorite birding spots is barely recognizable – at least from a human development perspective. The good news in all of this, the birds returned. Once again, the Crested Caracara was keeping watch. 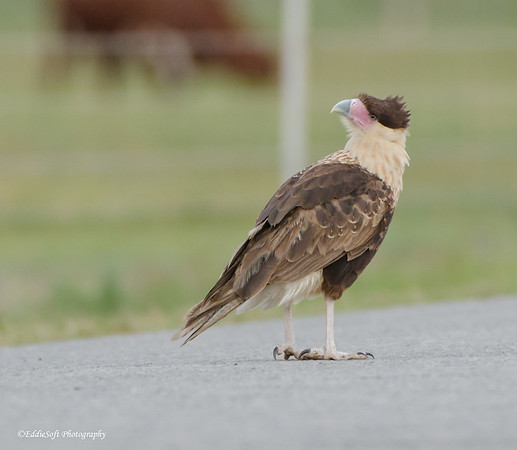 This specific specimen was my first encounter with the Caracara. In fact, up to that point I wasn’t even aware the bird existed. Linda was laughing at me acting like a child unwrapping a gift from Santa on Christmas Day. Seemed almost like a hybrid bird. The deadly beak and equally formidable talons leaned toward the hawk family. The colored bill was reminiscent of the Turkey Vulture, but clearly not as ugly as that creature (not to be overly demeaning about it, but damn, those Vultures be ugly – link here), nor did have the oily covering to protect it from the carrion diseases. 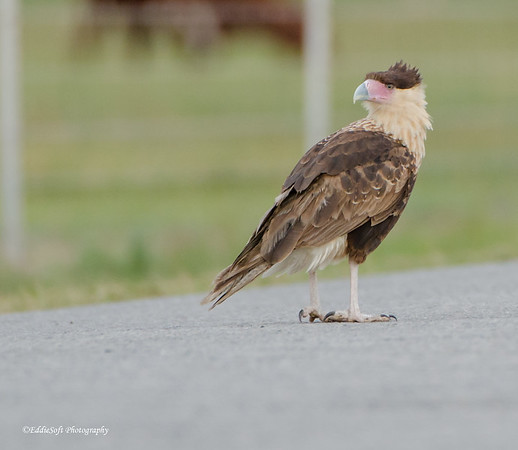 Once back at the RV, grabbed my reference book and quickly identified the bird. Turns out I was somewhat right on both counts. The Caracara is indeed a bird of prey, but falls in the Tropical Falcon category and not the Hawk group. I knew it had that birds of prey know their cool attitude about it, looking out from underneath its Elvis do at all the little birdies milling about for its scraps.

“Kiss the talon you heathens” 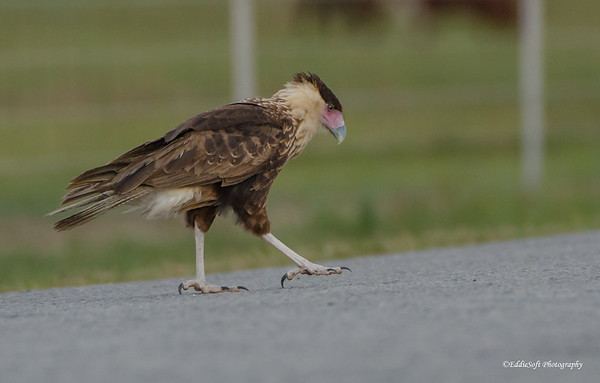 So, I mentioned I was somewhat right on the Vulture hunch. According to my reference books this rather beautifully feathered Caracara, likes to hang out with friends in low places – specifically … you guessed it .. Vultures. Rather than hanging with his Falcon brethren, this species is often found in dirty dives and two-bit bars feasting on the local roadkill. Definitely a shunning of splendor for a bird that is often referred to in Central and South America as the Mexican Eagle. 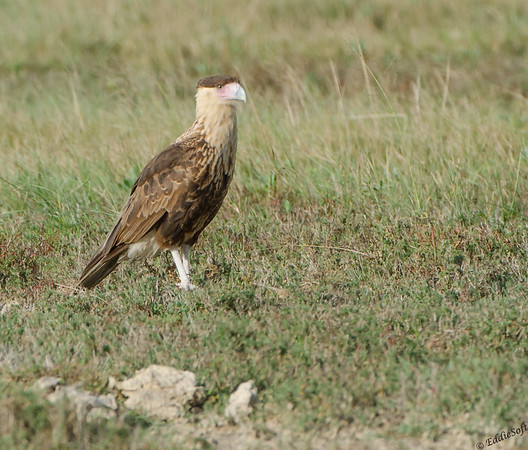 I can verify that the references books are 100% accurate in their description. Sure enough, our stylish Falcon was definitely seen mingling with the birds from the other side of the fence – literally, the other side of the fence from rest of the shorebirds hehehe. I got the impression that the Caracara was directing the Vultures to tear off some of the carrion and lay it off to the side so it wouldn’t have to get its blue suede shoes all sticky like.

“Seriously, do we have to listen to that damn song every time we eat dinner”

“Fine, be that way, Elvis has left the prairie!” 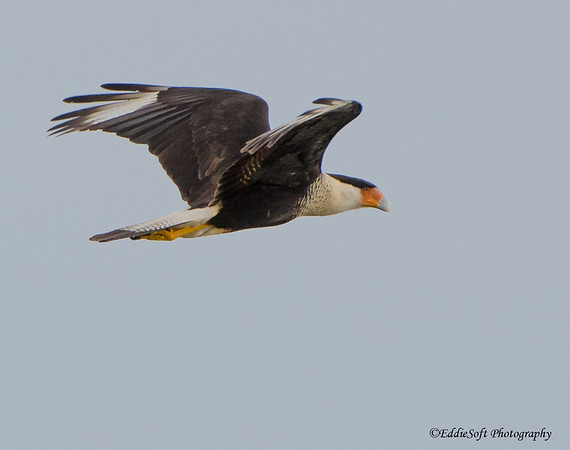 You may have noticed this is actually a different specimen. I thought it was interesting that the first specimen had a fairly pale red coloring for the bill. All the reference books indicated that they had a more orange coloring in that area. A few checks of reference books didn’t indicate this was a sign of maturity and the feathering didn’t differ by gender. Closer examination identified that the juvi’s are browner than adulthood. Suspect that also includes a paler bill. Based on this new insight, I conclude that the first specimen was a juvi and these last two shots are of the adult plumage. 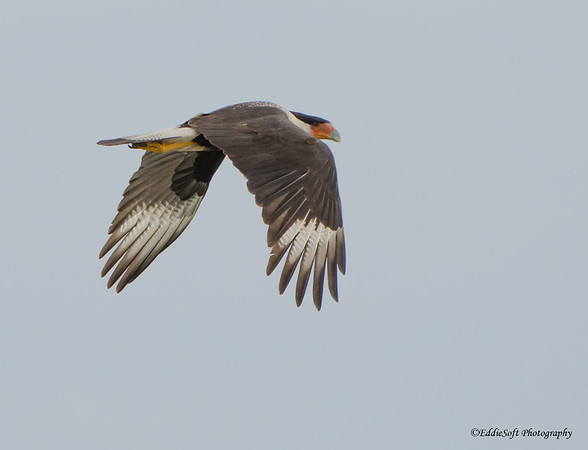 I wanted to include the flight shots to demonstrate the white coloring at “all four corners” – wing tips, tail and neckline. This didn’t occur to me in the field, but the white tips on the wings was very distinctive to the point that became the key identifier for the rest of the trip, especially from a distance where the bill wasn’t as readily visible.

Unfortunately, there isn’t much more I can provide about this new Falcon. Their region is pretty isolated to the lower continental states (Arizona, Texas, Florida). A slightly larger area than some of the other birds, as of late, that tended to either only be at the southern tip of Texas or restricted to the coastline. It is said that lucky birders can witness the Caracara flying by with their signature Gibson- J-200 slung over their shoulder. 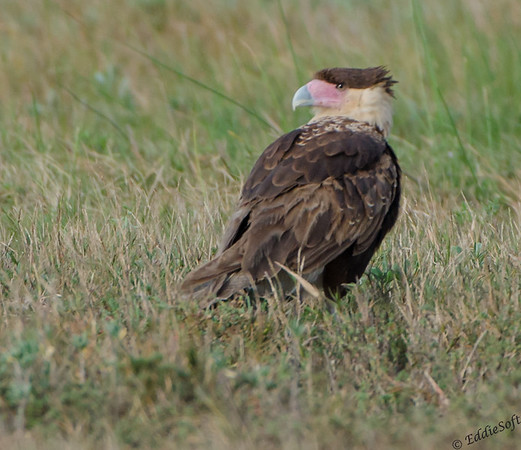 With that, I have to let you go. This is definitely one of the more intriguing birds found on our trips to the Gulf Coast. My prayers to those in the region affected by Harvey – truly a stunning example of what the raging winds can produce. Hopefully the site of the birds returning to the area will help instill faith in rebuilding their lives.