If you have not noticed yet, I am definitely trying to make the most of the extended holiday weekend. It is amazing how much more you can get accomplished with 24 additional hours to consume – not to mention the weather down in the teens with a good wind punching up the chill factor tends to keep me inside in the warm den. Most of you should know by now, ever since starting the sister site Wildlife Intrigued, I try to keep my social interactions/observations/commentaries out of the wildlife related posts preferring to keep those dedicated posted only on the Life Intrigued flagship site. However, there are times when those experiences are too intriguing (in this case read hilarious) that I can’t wait. As a quick one, my wife recently placed an order at a local pizza joint. This particular establishment has odd sizes for their orders always prompting a discussion on what size we should order just for the two of us. I heard her ask the order taker on the phone for assistance on the average number of people a particular size offering could feed. She then went silent with a quizzical look on her face followed by a muffled chuckle. She later told me the reason for the reaction – the clerk indicated he wasn’t sure, “but it does come in eight pieces”. I’ll let that sink in a bit if the humor hasn’t already materialized.

Meanwhile, how about we get to the real feature of post. 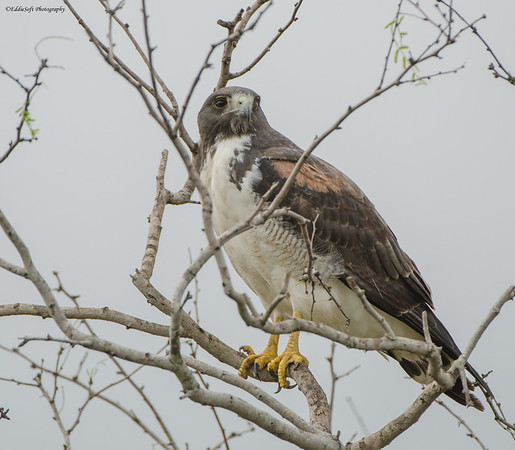 No surprise here, ANOTHER birding find from our trip to Texas back in January 2017. Like the last post on the Altamira Oriole, this new addition to my birding list comes to us courtesy of Laguna Atascosa Wildlife Refuge. Thanks to an overheard response by the ranger at the visitor center, we now refer to this birding hotspot as the Sticky Mud Lagoon. A visitor wanted to know what Atascosa stood for…a question we had never thought to ask. Now we all know thanks to a knowledgeable employee. This southwestern Buteo became quite the stumper when trying to ID it. The rufous coloring on the shoulders initially led me down the Red-Shouldered Hawk path. 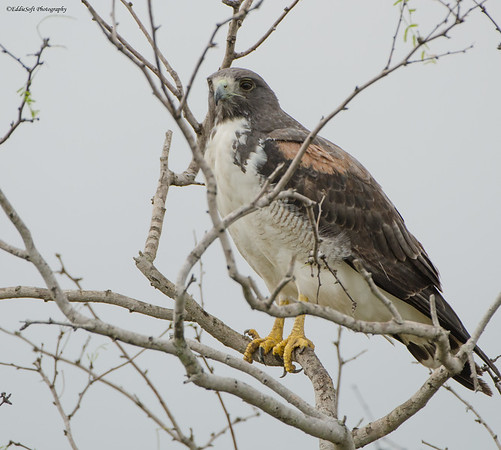 The rather clear white breast left a lot of skepticism once I had confirmed the Red-Shouldered has a fairly barred chest and lot more streaking on top of the wings. A quick search of southern hawks produced the possibility of the Harris’s Hawk. The region was localized to the south Texas region, so that was a positive. Definitely has the red shouldering, but based on reference shots of that particular Buteo, it appeared the marking on the Harris’s is significantly larger than the patch on our specimen. A quick validation of the chest coloring knocked that ID out of contention. The Harris’s sports a dark breast and carries the reddish coloring down through the leg feathering. I am pretty familiar with the Hawks in the Midwest and those encountered out west. The large size (larger than the common Red-Tailed) of this one and more solid markings were not aligning. Opting to look at each and every Hawk in my reference books, eventually came to the conclusion that this particular specimen was likely a White-Tailed Hawk. This was initially dismissed because the reference book shots has the long wings moved off of the tail giving me the impression the tail was always visible and distinctively white. In reality they have very long pointed wings that do hide their white tail feature. There is also a black tail band near the tip. If you look closely at the two pictures above you will just barely see it between the twigs of the tree. Fairly certain on my end, I sent it off for confirmation from my brother Ron. His first response was “Red-Shouldered” which prompted a recounting of the process that got me to the White-Tailed. Upon further analysis and some dead on reference shots on the web we are now in complete agreement – a new +1 and yes, another bird Ron will have to make an effort to catch up on. For reference, here is the backside of the Hawk showing the fairly solid coloring and those long tapered wings.

Linda and I encountered this bird on the way out of the refuge. The day was coming to a close, but following my golden rule, of “If you see it, shoot it”, made Linda pull to the side so I could get a few shots in the tin – thus the limited perspectives. I already covered some of the unique aspects of this new bird. To add a couple more facts, the white tail and black band is unique for Buteos in North America – had I been able to get an inflight shot, the ID could have been a lot easier. They seem to be the Hawk with the largest latitude span extending down into the Caribbeans. Lastly, juveniles have a 15% longer tail than adults – their tail feathers are not able to cover that length completely. Our specimen besides being very large, had sufficient coverage indicating it is indeed an adult.

That’s all I have for you on this particular bird. Hope you enjoyed reading about my latest addition. Now regarding the conversation on pizza size. I hope you realize by now, that the number 8 is the standard cut format for pizzas – half, half, mid slices which always produces … wait for it … 8 slices regardless of the size of the pizza and thus why my math major wife found it so amusing.

Going for the trifecta with today’s featured post. If you have been following along, we are all about the big state of Texas here at the headquarters of Intrigued. More specifically, we are laser focused on pushing my bird count up thanks to a number of visits to the Gulf Coast – wiping the sweat from our brows, pounding Alleve to counter the swelling in our fingers from typing and rubbing our eyes from pouring over reference books to properly ID the backlog of images we are trying to get through. Like the last post on the Vermilion Flycatcher, our current focus of attention was pretty easy on the ID front. 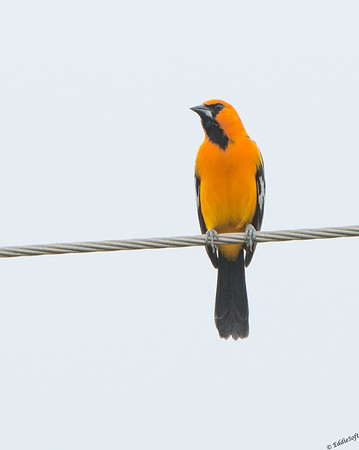 Up to this point, I have been able to cover our local Baltimore Oriole (link here). Thanks to a trip to South Dakota I was able to add the Orchard Oriole to the mix (link here). Adding to this growing collection of Orioles, a visit to the Red Rocks Ampitheatre produced a surprising Bullock’s Oriole (link here). Not a bad haul when it comes to the Oriole family. With those, I pretty much had the northern, east and west staples covered. Turns out, I can now add the southern tip of Texas – and I mean the very southern tip. 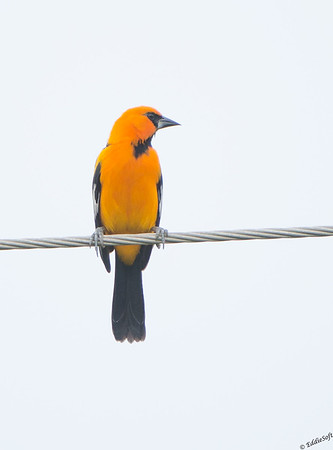 Hit the jump to read more about this Oriole family member.

END_OF_DOCUMENT_TOKEN_TO_BE_REPLACED

If all goes well around here at Intrigued, the bird counter should pretty much be free spinning well into next month. Most of those additions will be coming from the Texas coastline. Pretty sure I already made posts from our first trip to Galveston Island back in November 2013. I recently completed processing all of the shots from our Christmas trip down to South Padre Island last year. Those shots will be featured for most of the posts over the next several weeks. I need to get through those by mid February in order to focus on all the new blog fodder put in the tin on our recent trip back to Padre and then over to the Mission region on the Rio Grande. Texas has become a biding nirvana for me – each trip has produced multitudes of +1’s. A surprising number of those being absolutely gorgeous birds. 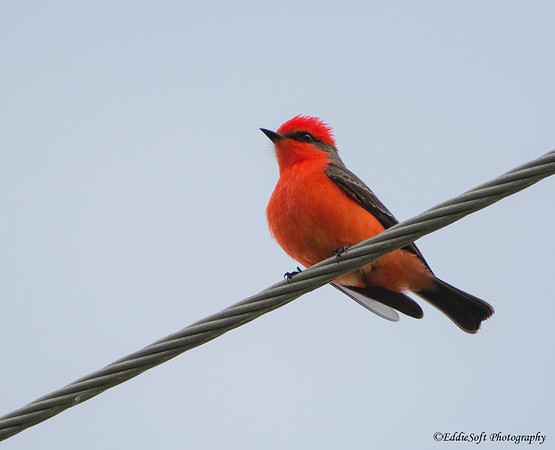 One thing for sure, the Peterson Field Guide I use for my field reference does not do this bird justice. At the time I had no idea what kind of bird it was. It was definitely smaller than a Cardinal although it did sport a spiky tuft of a crown. I did not boost the saturation of this bird, although the overcast feel of the day did give it more of a natural pop against the duller background. The Summer Tanager was the next option, but even that species is pretty much duller red all over and seemed stockier than this specimen- see my previous reference (link here). Hmmm – staying in that arena, it did have a feel of Scarlet Tanager which is definitely closer to the red hue along with the darker wing coloring. The definite robber mask set this one apart from that. My previous Scarlet reference is of a water logged specimen, but you can see that here (link here). (Note, I do have a better Scarlet in the queue, just need to find some time to get it posted). 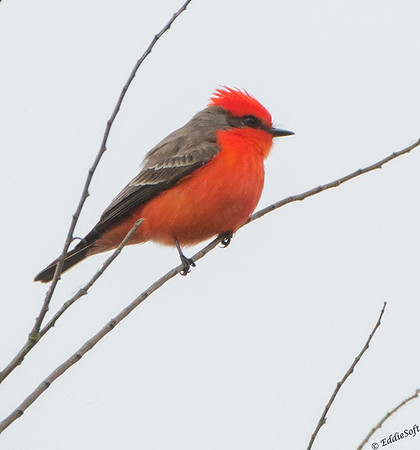 Hit the jump to see more images of this bird and, of course, learn what it is if you haven’t seen one before.

END_OF_DOCUMENT_TOKEN_TO_BE_REPLACED

Somehow this month has already gotten away from me. Partial blame is having spent the first week of January down in Texas seeking out new material for the blog. For the next couple of months you will definitely be hearing a lot about that recent trip as well as spoils from the other trips to Texas we’ve taken over the last several years. There is a specific reason for this southern state focus, but I am going to keep that under wraps for a bit longer. For you, the Texas focus is going to be either really good or possibly irritating. If you are a bird enthusiast you will definitely be the former – if you prefer your wild without feathers, then my apologies right up front, gonna be a bumpy ride. I do plan to sprinkle in some other creatures to help you through it.

Hopefully you can make it through the less than stellar photography execution. The day was overcast and basically too dark to even hope to get a wall hanger. Task at hand was to try my best to get something in the tin to satisfy requirements to officially get the check on my list. Took a bit of processing in the digital darkroom, but I think they are sufficient to get credit – will let my check officiating crew (aka my brother Ron) weigh in if there is a differing opinion. For now, you will need to tolerate some fuzzy soft shots. 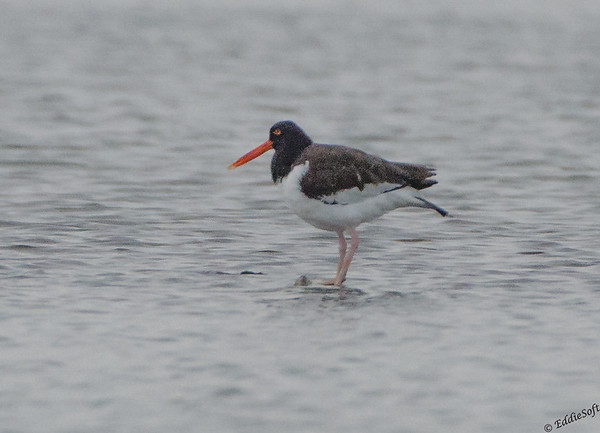 Hit the jump to find out with this new bird is!