Hope everyone is keeping warm wherever you happen to be. The Midwest is once again on a freezer lockdown as the temps plummet again into single digits. As I tell people, I really do not have a leg to stand on being that I choose to live in a state that experiences all of the seasons – the good with the bad, the perfects to the extremes. The irony of it all is Linda was quick to inform me tonight about the weather conditions in the very region we have been featuring this month, Texas. While we were down there over Christmas break, the temps were unseasonably cold. We went all the way to the Rio Grande and I didn’t get the chance to wear shorts once. The mercury essentially hung in the high 30s low 40s cresting once into the mid 50’s on the last day we were there. Don’t feel bad for us, our home town was experiencing -22 windchill. Our friends accused us of bringing the cold down to Texas and yes, it did warm up to mid 70’s the day after we left. Guess what, it is snowing in the Corpus Christie area and the windchill temps at South Padre are 18. Based on the covering we saw for 40’s, my guess is the locals were raiding grocery stores and bundled up like the kid in A Christmas Story.

Thanks to the web, you get to experience our latest southern Texas bird from the comfort of your home. 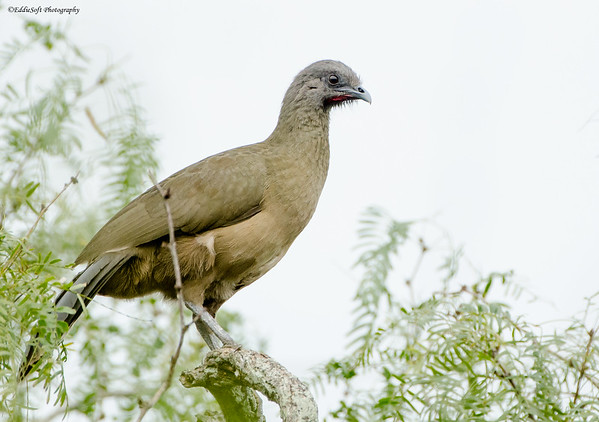 That rather strange looking bird is not a chicken although Cornell did imply it was a chicken relative. It isn’t a color deficient Peacock either. This happens to be a Plain Chachalaca. I can say without a doubt this is one of Linda’s least favorite birds to encounter in the wild – at least when I am around. For some reason the name makes me laugh. Upon initial discovery of the name, I thought it was pronounced Chawkalawka. Channeling my inner child this was uttered in a deep long drawn out verbalization – think lost rainforest tribe dancing around a fire chanting to the fire gods. Every time Linda and I encountered one I was obligated to inform Linda of its arrival by repeating my new tribal influence moniker. Chaw Ka La Ka Chaw Ka La Ka Chaw Ka La Ka Ugga Ooga-chaka, ooga-ooga hooked on feeling I’m high on believing that you’re in love with me. 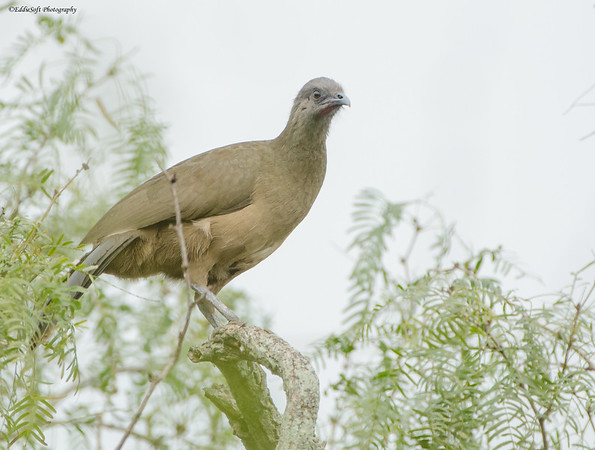 Hit the jump to find out more about the Plain Chachalaca.

Yes, this was repeated for every encounter we had since seeing it here at Laguna Atascosa National Wildlife Refuge on our January 2017 trip. Before you ask this protocol was carried over to our latest trip there – it’s like our little thing and by “our” I really mean “my” because Linda turns to angry birder whenever I do it along with threats of bodily harm. Thanks to some investigative work, found out I was mispronouncing it the entire time. It really goes by Chah Chah Lah Ka. Like the dance as opposed to my interpretation. It doesn’t have the same feeling in low tone as my sounding – bummer. On the upside, it can be just as annoying when sung to the tune of La Cucharacha. “La Cha Cha Laka, La Cha Cha Laka…”. Something tells me I’ll be walking back home on our next encounter.

Before I taint your understanding of this bird, it was not named because it looks like a cockroach, but rather due to its loud raucous call it makes which sounds exactly like it looks cha-cha-law-ka. Both Cornell and Wikipedia have call samplings on their website for you to experience. There is no mistaking when you are in the presence of these birds. If the call doesn’t give it away, they sound like a bull in a china store while foraging about tree limbs. One aspect you really can’t tell from the shots above is how massive the tail is on these creatures.

Initially thought they carried the Peacock or Turkey trait and fanned their tail up and out. This was never witnessed out in the field in any of our many encounters with the Plain. From what I can tell from my research this doesn’t seem to be a characteristic. All the pictures I could find on Google and the reference books never showed a raised position.

The specimen above did take the time to spread them out while foraging on the ground. I also have never seen them actually take flight for any distance. Much like a Turkey, they would start flapping their wings in a loud commotion and psuedo fly (more like a hop) down to the ground or other close perches. Neither Cornell nor Audubon society have flying references. Sibley at least had a flight drawing which had the tail out forming a cool diamond pattern. 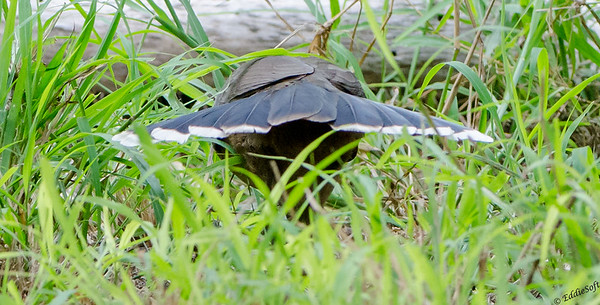 Seeing as how I’m running short of images, time to keep the tradition going and try to leave you with some takeaways about this new bird on my list. Cornell was downright weak on their interesting facts simply relating that they are commonly seen feeding in “precarious” positions – even upside down. Common in this sense may be a bit of exaggeration being that there wasn’t a single encounter that collaborated that fact. By now you know I’m all about including interesting poses on my post – when this is the best I can do on that front, thinking the optimal word is “sometimes”.

This is another bird my brother Ron will have to work to make up ground on the bird count front. The Chachalaca’s region tops out at the southern most tip of Texas. In fact, this is the only member of this family of birds (guans, currasows, chachalacas) that visits the United States. The good news is we were able to encounter them in a number of different refuges, so pretty easy to get the check if you are willing to travel.

All I have for you today folks – it’s a work night and I still need to lift and log in to work on some tasks. Hope you enjoyed ANOTHER add to my list – that counter is going to need some oil hehehe.

One thought on “Cha Cha Cha Went the Birdy’s Feet”