Sorry these posts are coming so slow.  Of course, the reason for this is the “epic” post theme for this month.  I’m trying my best to cover some very significant events, but that means I have to work for subjects.  Well, actually, I have the subjects, since I’ve been waiting awhile (in some cases what seems like forever) to get some of these topics published but I still have to process all the images.  Case in point, today’s featured bird.

If you are a birder, you are probably salivating right now.  That my friends is a shot of not one, not two, but three specimens considered the holy grail of my North American Bird List.  For those of you not drooling, these awesome birds are none other than the rare Whooping Crane.  Let’s type that again .. Whooping Cranes – wow, that feels really good.

Hit the jump to read more about this epic bird

This really shouldn’t be a surprise for those of you that have taken the time to check out my NA Bird List (link here).  I cheated a bit and already added this bird to my official gallery.  This wasn’t technically a violation in the sense I’ve posted multiple times on the Cranes already (link here and here) from our many trips to the International Crane Foundation.  Except there is one major different between those pictures and these… 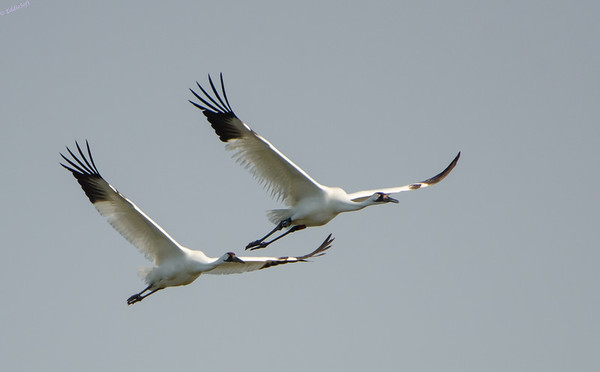 These Whoopers are FREE to roam the way god intended.  There are actually two different sets of Whoopers in this post.  We came upon a group of three in our first encounter.  Two of them are showing in the shot above and below this text.  The second set of Whoopers was encountered about 15 minutes later when a pair of Whoopers came flying in with their juvenile.  You can see those in the first and second shots of the post.  It probably goes without saying, but the brownish one is the juvenile.

How is this for a tight formation!

There is actually an extra special aspect to this set of shots.  If you look really close in the first set of shots (the second group of Cranes we encountered) you might notice something is missing.  Hint.. look at the legs.  It might be difficult to see through the drool or you might not be aware of just how rare these particular birds are.  The second set and at least one of the birds in the first set do not have IDENTIFICATION TAGS.  That means, those birds were born in the wild. 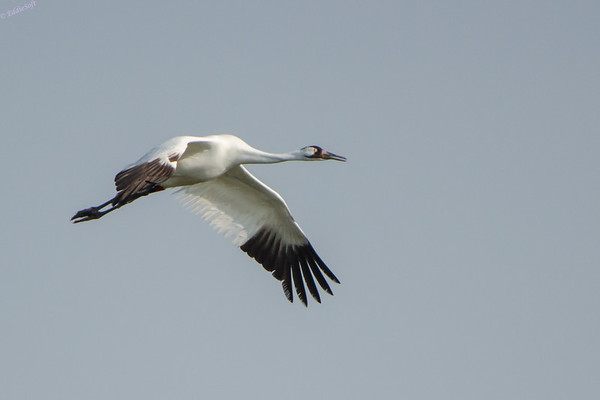 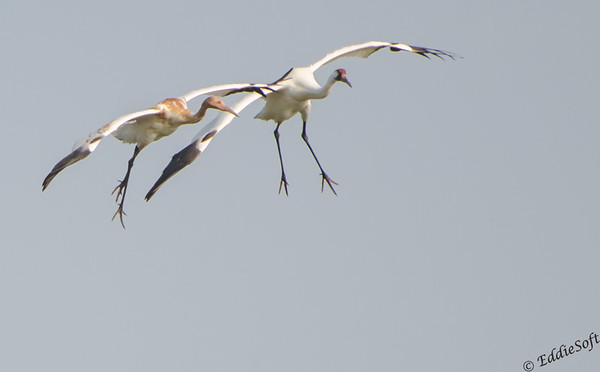 Now those numbers are shocking enough, but thanks to the efforts of organizations like the International Crane Foundation (which Linda and I are members of) they have been able to grow their population from a mere 15 in the wild back in 1941.  That is not a typo ONE FIVE.  It is heartbreaking to think we almost lost these truly majestic birds and they stand as a shining example of what we can pull back from the brink given proper dedication and sponsorship.  This is probably a good time to once again give kudos to the fine International Crane Foundation located oddly enough in Baraboo, Wisconsin.  We strongly suggest you stop by if you happen to be in the area especially if you have not had the pleasure of seeing a Crane in person.  Some of those birds can look you straight in the eye.  Oh, and if you like what you see, consider becoming a member of the great cause.

This next shot cracked me up – looks like the kid is still trying to get those wings under control hehehehe.

This is actually the first time I had ever seen a juvenile.  The ICF only had adults in their display so it was a surprise to see all the brown it was sporting.  Clearly it had not grown into the easily identifiable red hood but it did sport the dipped wing tips which is actually pretty similar to our more common White Pelicans…. except even as an immature, they clearly outsize them – at adulthood the Whooping crane will top the charts around 5 feet tall. 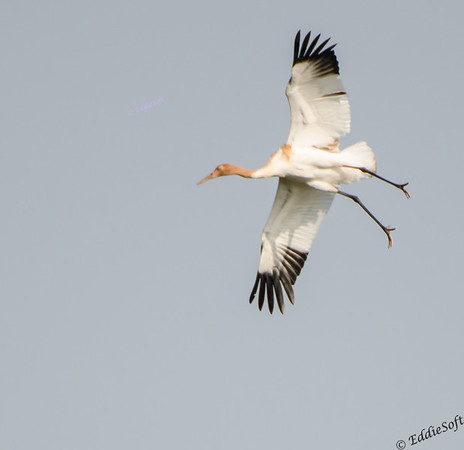 As graceful as they might look soaring through the skies, their landing process looks downright goofy.  Ladies and gentlemen, please put your tray in their upright positions, stow your bags under the seat, hold on to your ankles and kiss your ass good…. 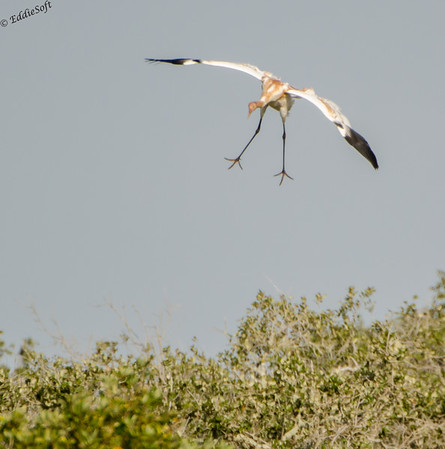 No worries, they young Whooper landed safely.    So, these particular specimens are part of the 308 that migrate between the Aransas Refuge in Austwell, Texas and Wood Buffalo National Park in Canada.  Their region map is quite comical – it consists of basically one line between the two sites.  After experiencing these Cranes in captivity at the ICF, it was clear I needed to see these awesome creatures in the wild.  Roadtrip! 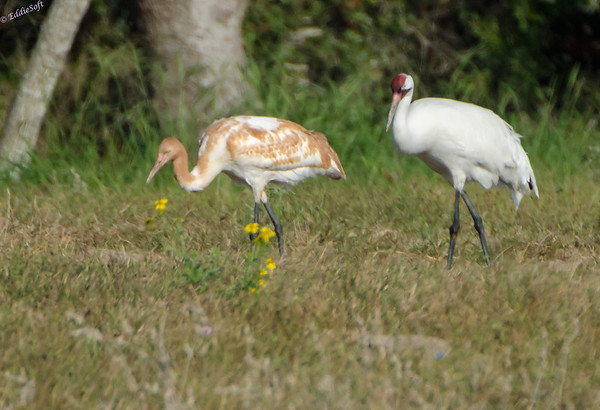 Back in November of 2013, we loaded up the car and headed to Texas on a mission – one goal – get that Whooping Crane in the tin.  This, as you now know, meant a trip to Aransas National Wildlife Refuge.  I actually had some secondary missions, but I’ll leave that future posts.  Obviously, based on the evidence in the post, this mission was a total success.  However, it wasn’t as easy as I had hoped and if it wasn’t for a nice lady at the hotel we were staying at, it might have been a complete failure.

Apparently these Whooping cranes are not too keen on Sandhills  invading their spaces.

We found our way to Aransas eager to see our first Whoopers in the wild.  I leaped out of the car and headed straight to their observation deck that overlooked the marshes and shorelines beyond.  A white bird was quickly spotted, The Beast brought on target and sna … wait – that’s just an Egret.  Another large white bird spotted, The Beast retargeted and sna… dammit, another Egret.  Beyond that, nothing.  CRAP.  By now, the pterodactyl sized mosquitoes they have out there were on to my scent.  Not only are these mosquitoes (if you can call them that) Texas sized, but they were impervious to our near Agent Orange levels of bug spray.  It wasn’t long before we were running back to the car in fear for our lives.

(note, the annoyed look of the Whooper whose authority was not being respected below!) 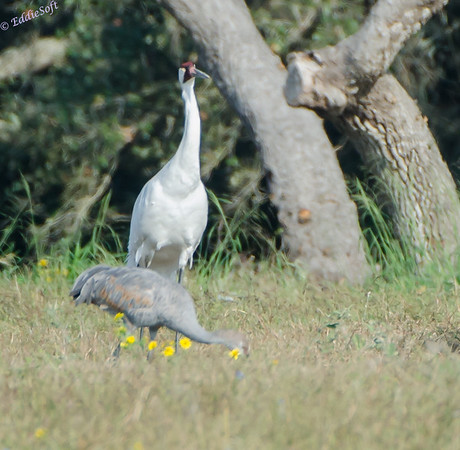 The next morning, we tried our luck again.  Once again, up the long boardwalk to the observation deck.  This time we were not even teased by Egrets.  NOTHING beyond those god forsaken bloodsucking demon spawn now throwing obscene taunts in our general direction.  Excitement soon gave way to disappointment and then resolve to get back to the car with a few drops of blood still left in our bodies.  Dejected, we headed back to the hotel.  A long way to drive to come up with an empty tin. 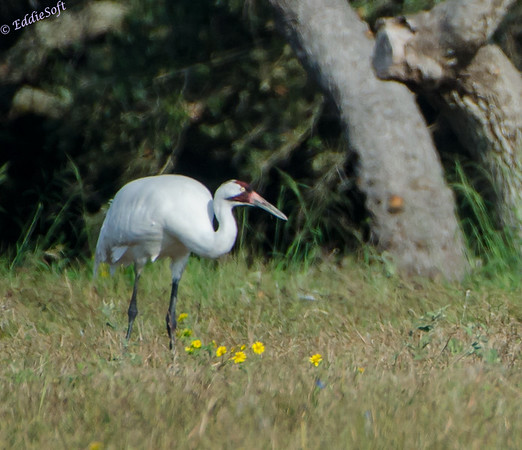 I think Linda ended up talking to a hotel clerk about various places to eat in the area.  I was in the car trying to cope with the sadness, so not sure how the topic came up, but they got to talking about why we were down there and how disappointed we were having failed to see them after two visits to the refuge.  Maybe Linda can provide some details on what the clerk said, but she came back and told me the lady confirmed they were not at the refuge …. but were instead at a field in another nearby location. 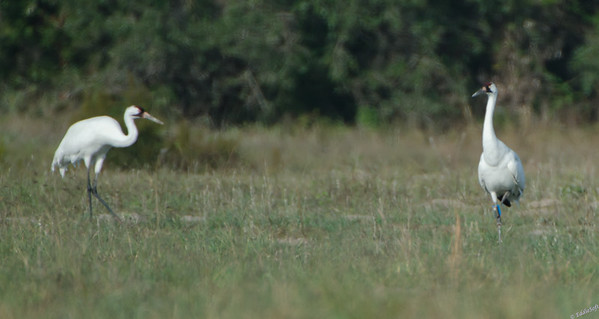 Needless to say, we were skeptical, but at this point I would have driven 30 miles to see a stuffed one.  The next morning we headed over to the new location.  Turns out this was in some sort of beach front neighborhood – doubts were definitely growing at that point.  Fortunately, we spotted a number of other birds in the area ranging from Turkey  Vultures (link here), Pelicans and even Herons.  This kept us entertained for a while – especially when I spotted another new bird walking across a field (more to come on that one in a later post).  We opted to make a few more loops around the area just in case we happened to spot the Whoopers.

(by the way, the shot below is a Whooper that has been tagged – see blue tag on the right leg) 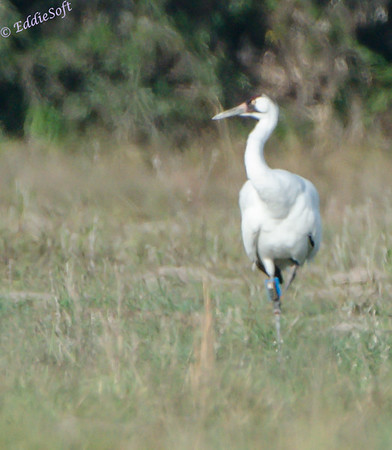 Sure enough, the first small flock of three adults came flying in.  Linda joked I nearly wet myself.  I should have apologized at the beginning of the post about how soft some of the images were.  These birds were a long way off and I had to use the tele to draw them in close enough for you to even identify them.  We took several hundred shots of this first set before they flew off.  Not long after, the second set made their way to the field taking up the rest of our digital cards.  By then I was walking 2 feet off the ground (probably because I was standing on the seats shooting over the car roof).

A local ended up coming by and talking to us about the Cranes and informed us about a secret area full of Black-Crowned Night-Herons nesting in the trees.  That ended up being a funny story I’ll share in the future.  Time to wrap up this epic check mark in my Birding List.

Hope you enjoyed reading about my prize capture… I wonder if Ron has this one yet hehehehe.

12 thoughts on “Whooping it Up”