Here’s a change of topics for you – how about some Reptiles!  It has been awhile since I brought out our prehistoric friends.  Think I’ve mentioned it before, but when the feathered subjects get slim I start looking for other things to occupy my shutter time.  One of the first alternatives I look for are those hard shelled inhabitants of the wetlands. This particular Red-Eared Slider Turtle was shot at Banner in March of 2012

Notice the red mark near the ear location.  Per the documentation I could find, this distinguishes it from the Painted Turtle below which is similar in shape and size, but only has the yellow markings on it.  This one was shot at Emiquon National Wildlife Refuge in March 2012. 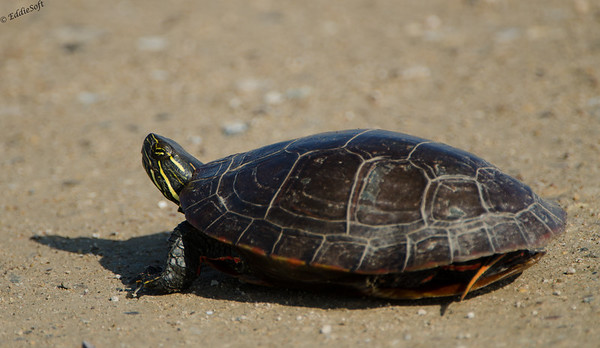 Hit the jump to see a few more pictures … and maybe a few pictures you might not want to see.

To be honest, before looking these up I always referred all turtles of this shape to be Boxer Turtles.   Not sure where I picked up that incorrect generalization (I blame my lower level education experience), because they are NOTHING alike beyond they both have a shell.  I feel a little smarter today – my work here is done.

Now, contrast that with this species of Turtle found lurking in the pond waters at Allerton Park in Monticello IL back in March of 2015  It is hard to tell from the visual due to lacking a reference point, but this dude was huge!  I am pretty sure a similar specimen led to the Loch Ness monster myth over in Scotland.

I believe it is a Snapping Turtle but there isn’t much to go on from an identification perspective.  I am simply comparing it to the giant assed Snapper that visited our place many years ago (link here).  This Allerton specimen dwarfed the one at our house so needless to say there was zero chance I was going to put my hand near it.

This next shot came out a little soft (sorry about that).  It made me laugh when we spotted this at Lake Andes in South Dakota back in May 2013.  Too far to tell exactly what they are (and too soft), but my guess is Painted or Sliders.

I’ve been looking for a good opportunity to feature this next shot of a frog.  I happen to really like the composition.  Seems to capture the mucky environment these creatures call their home.  In stark contrast to their surroundings, these frogs actually sport some vibrant colors from their often covered green skin to their shiny copper eyes.  Just for reference, this particular shot was taken at the International Crane Foundation back in July 2015.

Now, I brought you that rather cute picture because I wanted to soften the impact of the next shots.  In truth, this post was actually selected because of its strong relationship to the macabre topics I’ve been featuring the last couple of posts.  They were taken at a small pond a few hundred feet inland at Lake Andes in South Dakota.

I originally took this shot because it looked like the large turtle was sleeping away the afternoon.  Getting a little sun on the back for that tan all those swamp chicks rave over.  We came back by there after a checking out another trail.  The scene had changed a bit with some rude Painters (guessing) deciding to play a trick on the basking Turtle – I heard they are quite the prankster – chalking kick me on the shells of unsuspecting victims and even tying bobbers on tales so their comic victims can’t dive to escape the embarrassment. 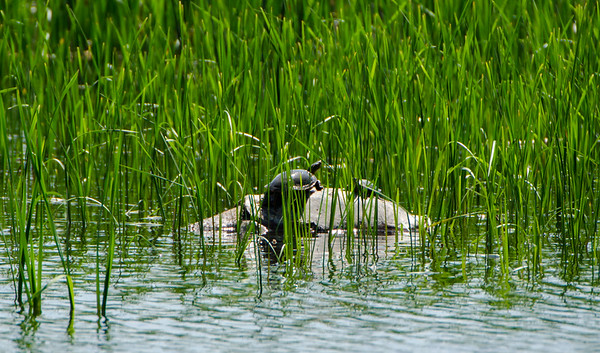 It wasn’t until we walked the rest of the way around the pond did we discover what really up.  There was a similar site much closer to the bank that shed new light on the situation.  Ummm, how should I put this — how about in song..

(also a test of your musical knowledge).

Yep folks, that Turtle be gone.  Fly dinner for months and months to come.  I have no idea what killed these Turtles and quite frankly I really didn’t want to find out.  It was definitely odd to see not one, but two old Turtles at end of life.  They can hold their own against most of the standard pond inhabitants and very view shore animals would risk tangling with a Snapper.  I did do a quick search to see if Alligators or Crocs were in range and that came out negative beyond a huge reptile attraction near Mt. Rushmore –  Reptile Gardens.  Ask Linda about a visit we took there one year … just ask her hehehehehe.  If I recall correctly she screamed so loud it was heard two counties over.

Well, that’s all I have for you today.  Hope you enjoyed.. at least the first part.