I am officially an owner of an empty shell of a body.  Tonight’s run was quite the struggle with the gas running out at the 2 mile mark.  Forced my way to a total of 8 miles but there were some dark side of the moon moments that made me think back to the last section of my Marathon.  Pretty much overdid it digging the trench yesterday.  Not good seeing as how I have a training run in the Quad Cities this Thursday evening prepping for the Bix 7 later in the month.  Tomorrow just might be a take it easy day (for the record, I HATE those days).  I promised another update today so broken body and all (ha), I’m here to serve.  Today I bring you a collection of shots of the Eastern Kingbird. 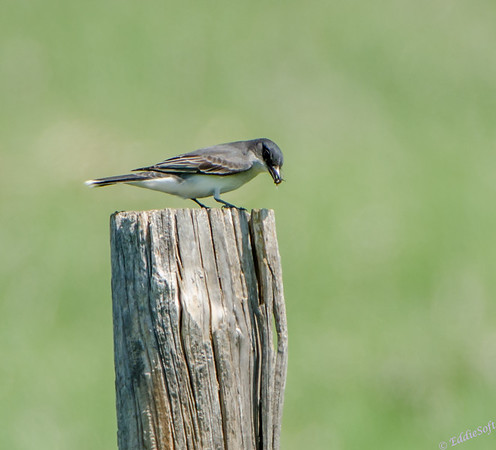 These first two were taken at Lake Andes in South Dakota.  We were passing through on our way to Yellowstone National Park back in May of 2013. The Eastern Kingbird happens to be one of those species that is easy to identify in the field… even if you are not a seasoned birder.  They have a fairly slim profile with a brilliant white underbelly up through the neck.  This contrast with the black overcoat (some say it wears a business suite) is easily recognizable from afar – especially when spotted in their preferred marshy habitat.  Similar to the Phoebes and Flycatchers, these birds put a serious hurt on the insect population wherever they roam.  Watch them for a bit and you will see them dart out from their perch, do some amazing acrobatic moves and return to their starting point with the fruits of their labor clinched tightly in their beaks (like in the shot above). 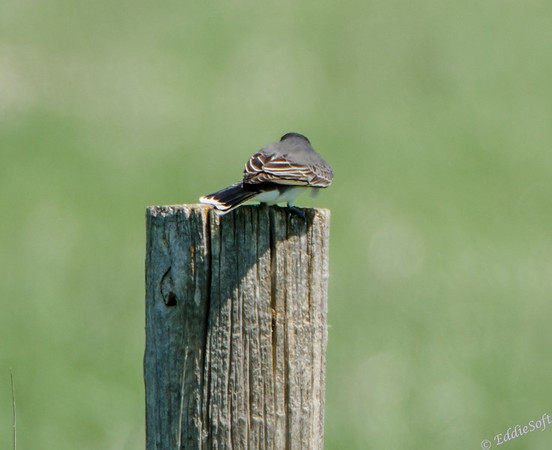 Oh, I should probably point out there is another easy way to identify them in the field.  If you check the shot above you will notice their tail feathers look like they were dipped in white paint.  This is usually my first identifying mark depending on the viewing angle.

Hit the jump to see a few more shot so the King.