And we are back on the Mississippi River for the second part of the spoils from the recent Davenport, IA Eagle run. As promised, part two will take you from the more traditional shots like this. 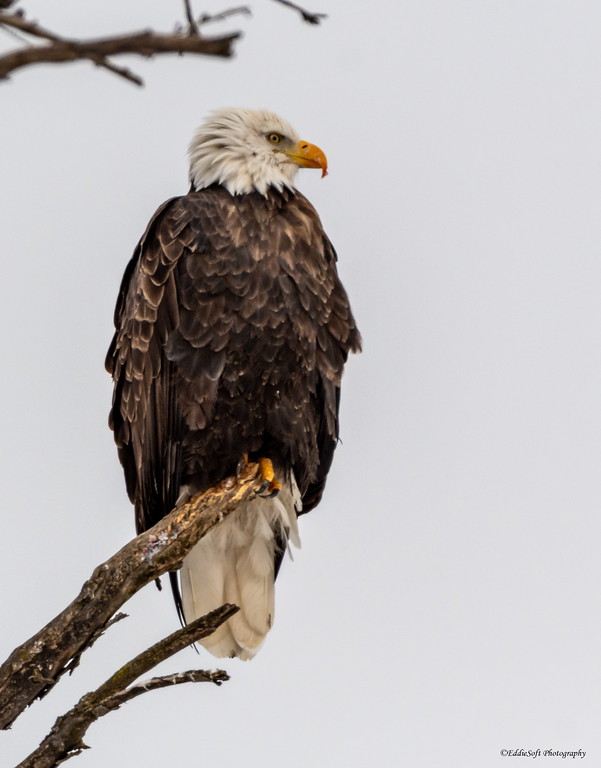 (mental note, go back and lighten this one up) and bring you more action oriented perspective like this immature preparing to bring death to those that dare swim too close to the surface. 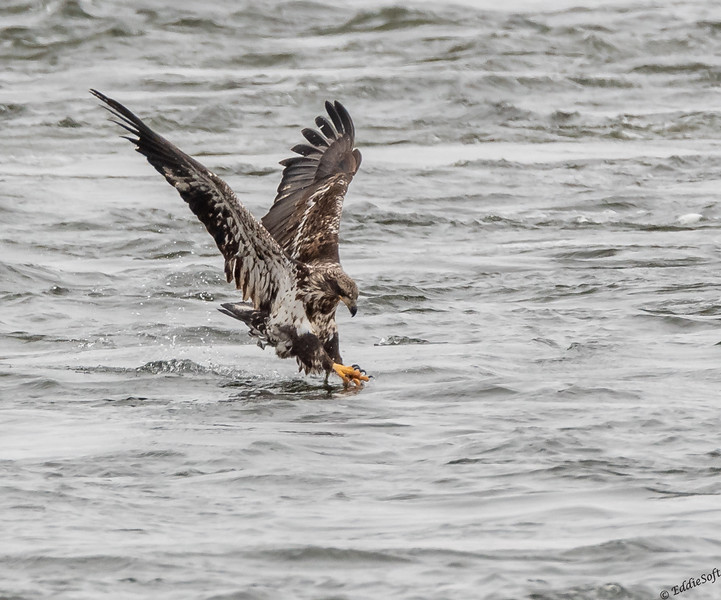 Hit the jump to see a crap load of action images from the Davenport shoot.

Disappointed from our Bettendorf lock and dam stop and then rather slim pickens at Eagles Landing, we decided to head down river to the lock and dam at Davenport. Linda heard from our friend Stewey that there was a strong gathering of targets there – he had also confirmed the loss of luster at Bettendorf. We have shot at that lock and dam a few times in the past with mixed results. 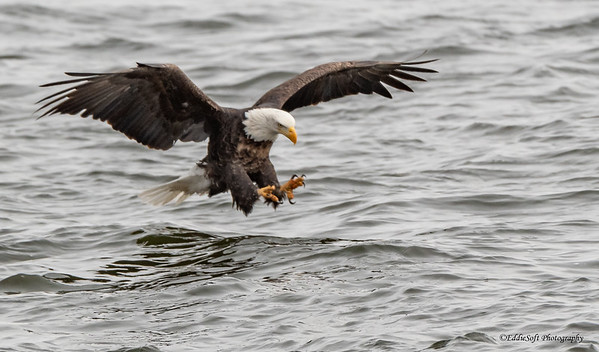 Managed to find an open spot on the railing at the river’s edge. Tried to keep good social distance from the others that were there as there was no need to get my drool slathering on anybody ha. As is often the case with Eagle shooting, I opted to leave the tripod in the car. I prefer the mobility of hand-holding, however it was there if conditions required it. 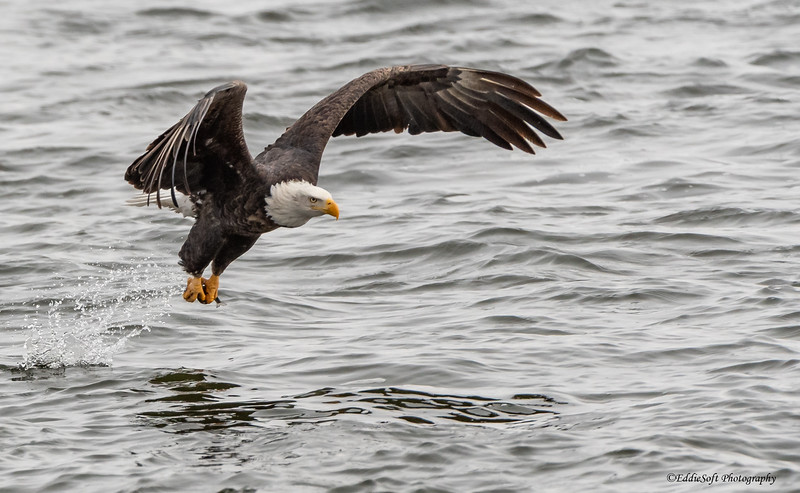 Find it best having something to brace myself against to offset the obligatory effects of gravity on The Beast. The subjects were hunting in the middle of the channel taking all the reach the glass had. Wouldn’t be any wall-hangers that day – simply enjoy the moment, get some tracking practice in and favorite of all, experience the behavior of a top tier sky predator (the Owls opted to let them have their day in peace ha). Legs braced, arms ready for battle as it was time to put the eye on the prize. 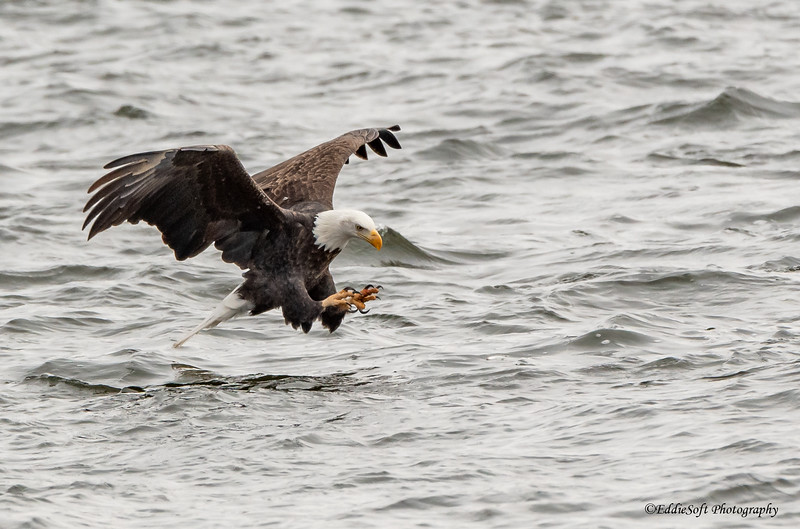 I find the process very repeatable. Scan above the waters and determine which one is ready for a go. Discovered it is helpful to look for one that is soaring fairly horizontal and then makes a slight jump up with wings outstretched. This is my signal to get the camera up and on target. Next step is to be flexible as there are likely two options. It will bring the wings in to accelerate downward in its current direction or bank before starting its descent. 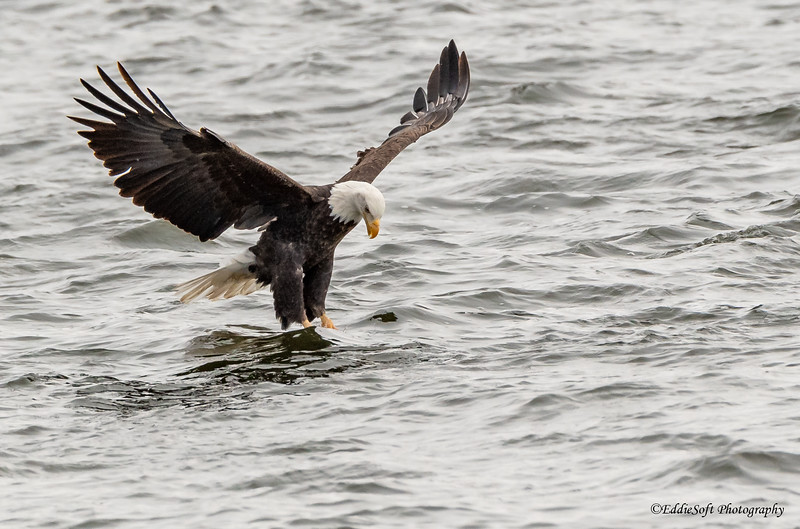 Slowly it will drop its legs straight down almost as if it wants to shake them out and get the juices flowing. By now you should have the continuous focus locked in (hope you are using rear button focus) and start panning on the descent plane. A few feet from the water it will pull the legs into ~45 degree angle, razors fully deployed braced for impact. 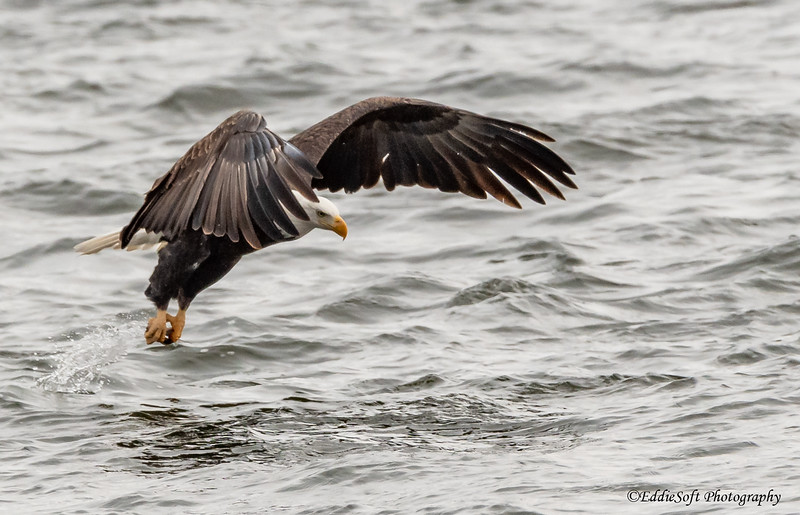 The minute I see that posture, the shutter finger goes into action. Once over the target, the legs extend, penetrating the surface grabbing the unsuspecting prize. From there it is full lift mode as the 80 inch wingspan starts chewing away at the cold air. 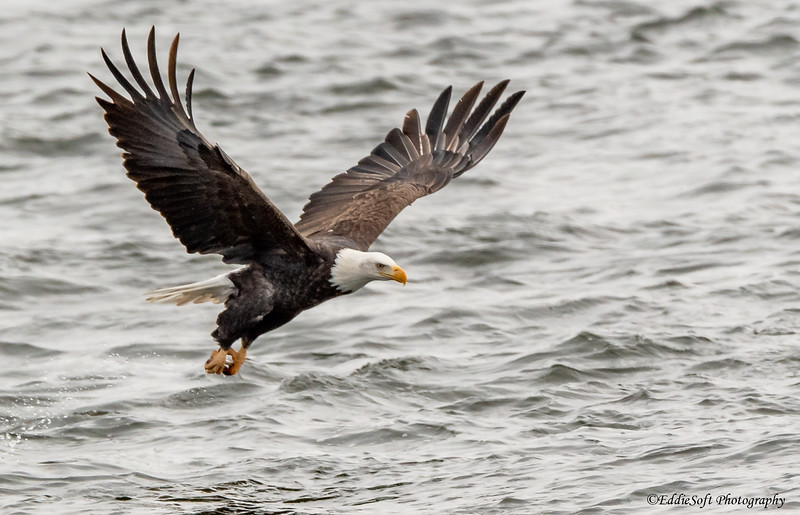 To be honest, I never really know if the grab was successful until a ways into its ascent and see the telltale flapping between the talons. Experienced some behavior that day I’ve never witnessed before – will save that for the next post as your browser cache is likely already smoking.

… and that is pretty much how it goes one bombing run after another. Find ’em, relax ’em, cock ’em, 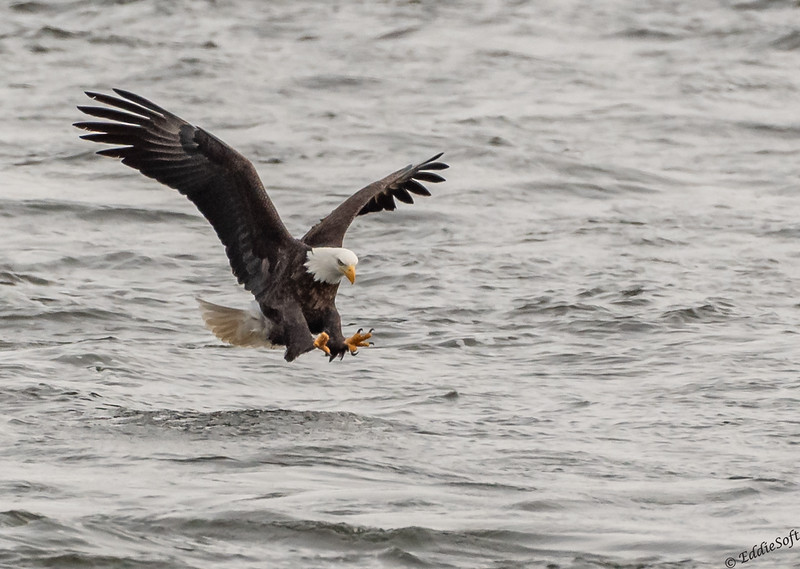 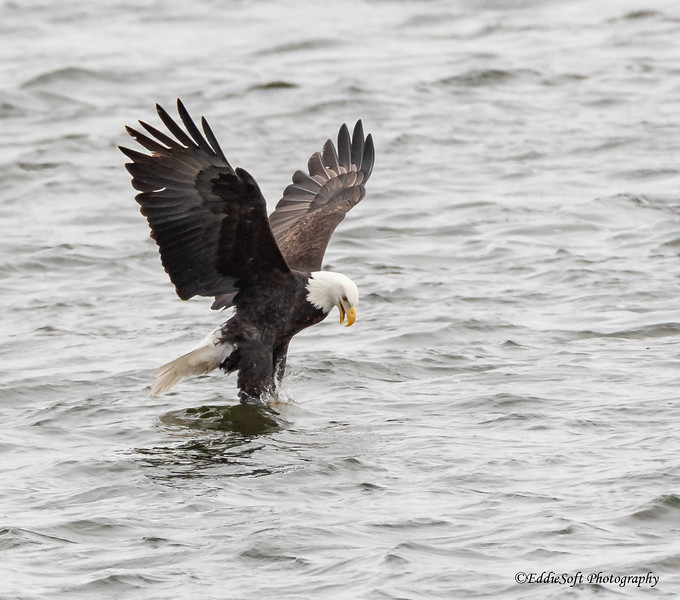 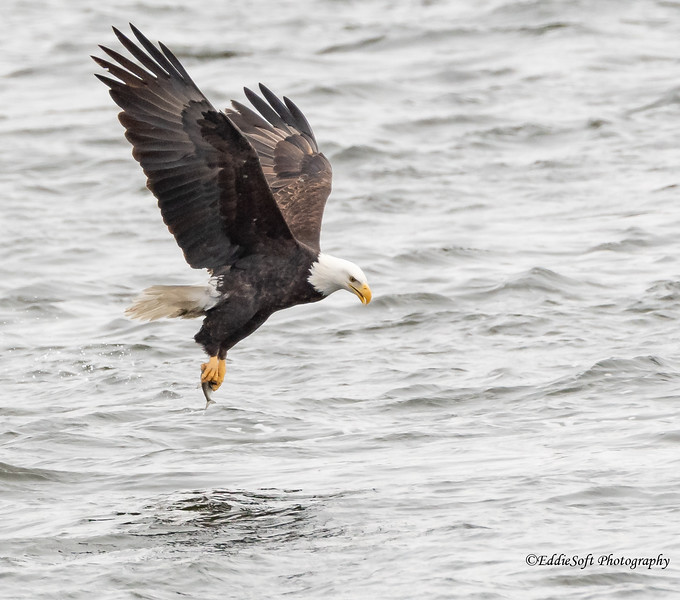 When you start to realize how successful these creatures are at their hunting craft, you almost begin to feel sorry for the fish. Then remember one of my golden rules that that circle of life is not emotional UNLESS it is your pet THEN it becomes personal. Nothing makes me more alert than a large shadow on the ground coming towards our 4lb Poodle. Now back to fish..lock, load, fire.. 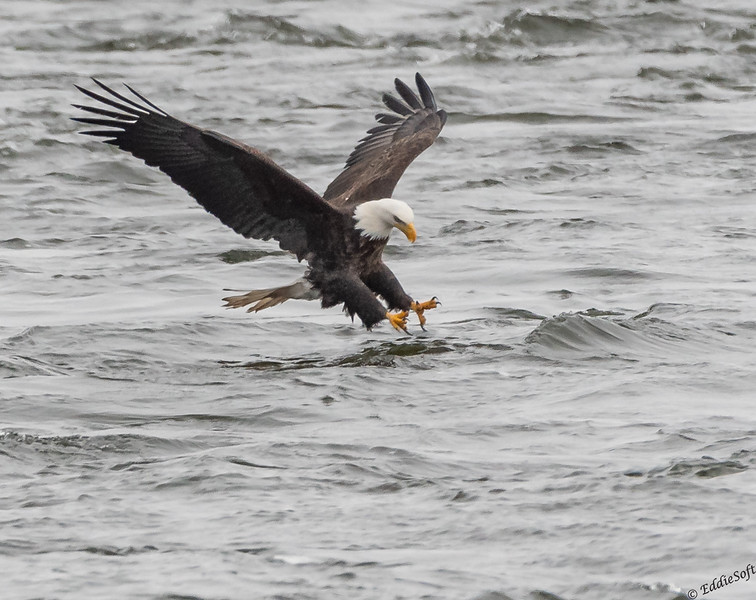 .. and head to safety before your hard earned reward becomes someone else’s snack. 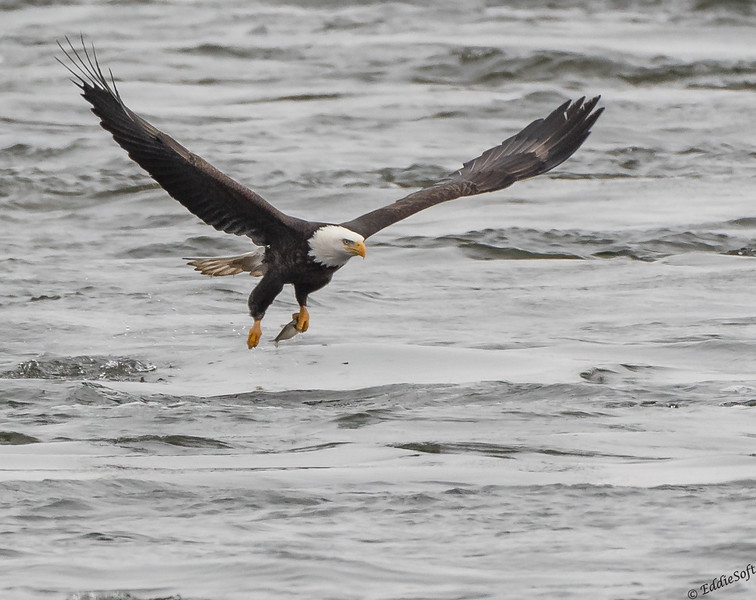 The intriguing thing is these sorties are happening nonstop in busy waters. The Canada Geese are thick in this area and the abundant fish are not in any danger of their appetite. Maybe they just like watching the show up close and feel confident in their own size ratio. 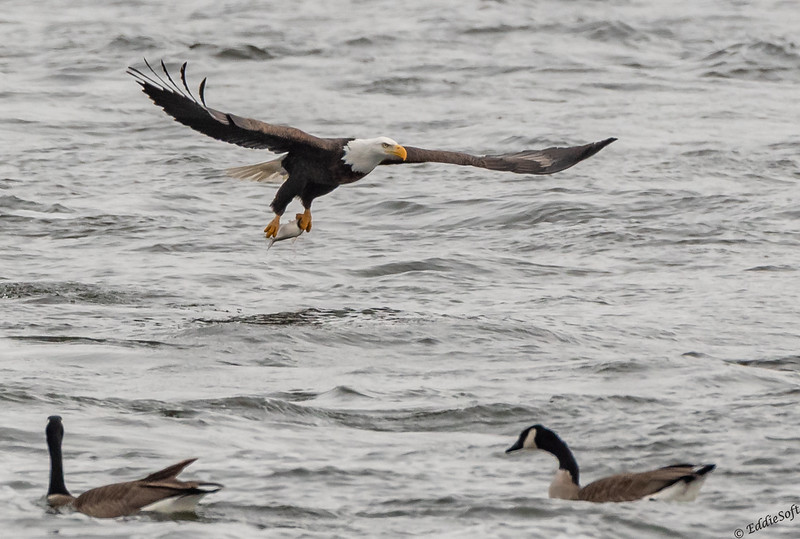 A small group of Mergansers ended up having quite a fright – yeah, think I leave that for the next post as well and just focus on the fishing shots. Not a big “chimper” I tend to just quickly check the general focus and the histogram for my read on settings – would hate to miss the shot of a lifetime because I’m concerned about judging the quality of a shot on a 3×3 LCD. Once dialed in, unless the light changes dramatically or transferring from light to dark backgrounds you should be good to go for several shots.

Humorously in retrospect, Linda showed me one of her shots and pointed out her subject had successfully grabbed a fish. Assuming up to that point none of mine were successful I went back to my station intent on at least getting one shot of a fruitful run. Can’t have the wife out shooting me in my primary domain – turns out unwarranted, but definitely some undo stress there ha. 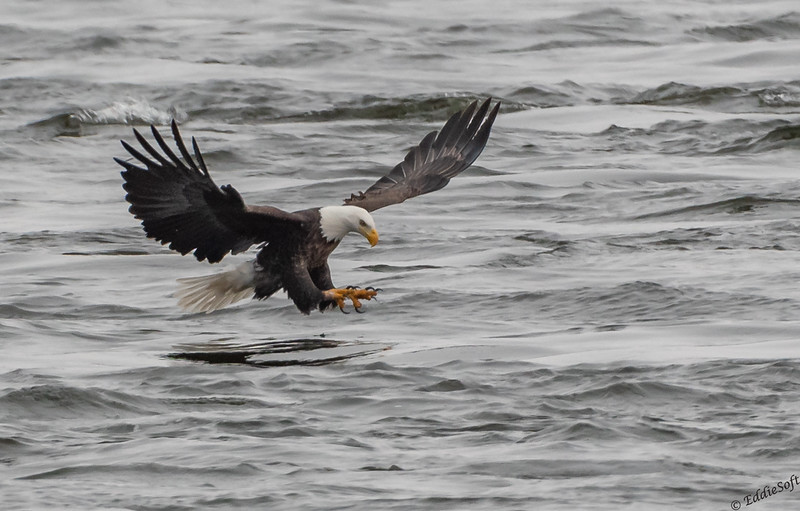 There are definitely a lot of shots piled up on the digital darkroom floor and even a few of these used in the post are slightly soft but less noticeable in the smaller frames. Some of those I simply kept in to give the full attack sequence for the various runs. Will find my favorite ones and go back and spend some more time getting them tweaked just the way I like. 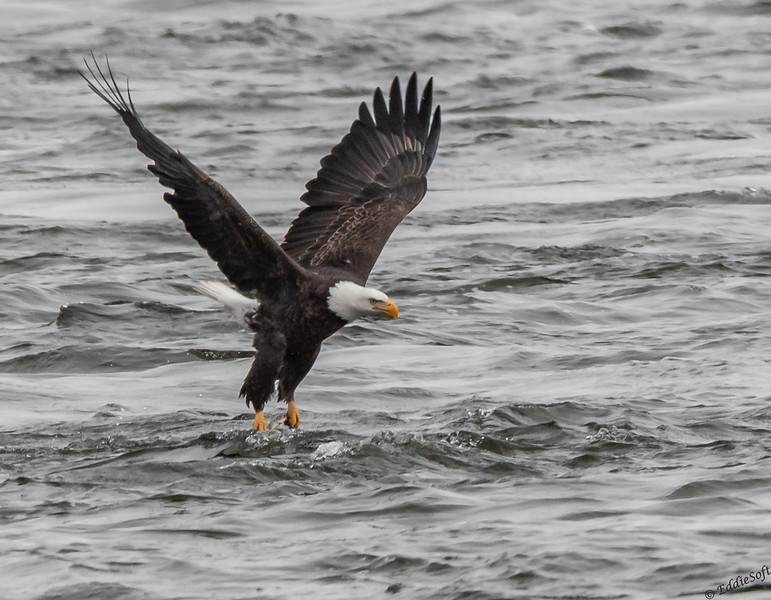 Do like the thick, rich, dark feel of the water as it helps to convey the cold tone of the day – would probably pop the whites a bit more on the subjects just to bring them to the foreground more – overall, no complaints beyond I wish I could have gotten closer to the channel. 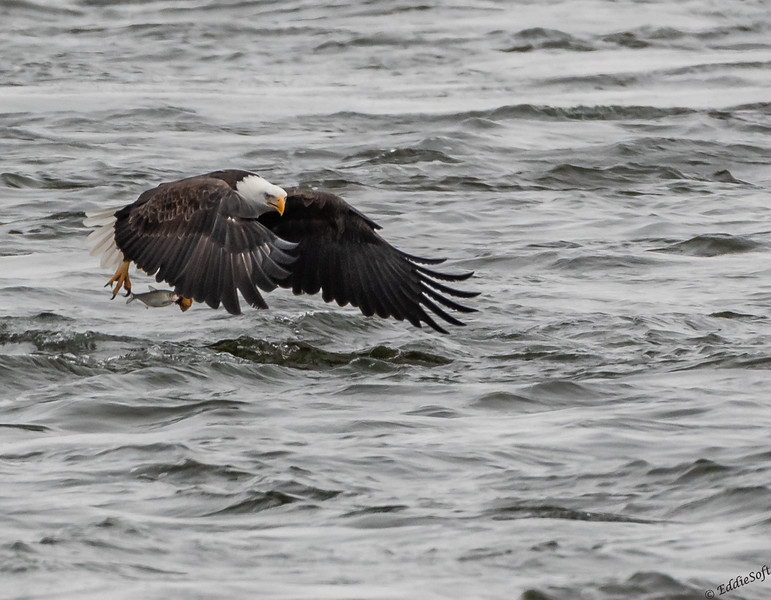 Every once in a while an Eagle would do a fly-by to bask in the applause coming from all the shutters flapping on full continuous. Imagine a line of people with long black barrels moving like synchronized ice swimmers doing their best to track the huge bird. As soon as I hear those rapid clicks I immediately realize how expensive it was to be a wildlife photographer in the days of film – needed those sponsors for sure! 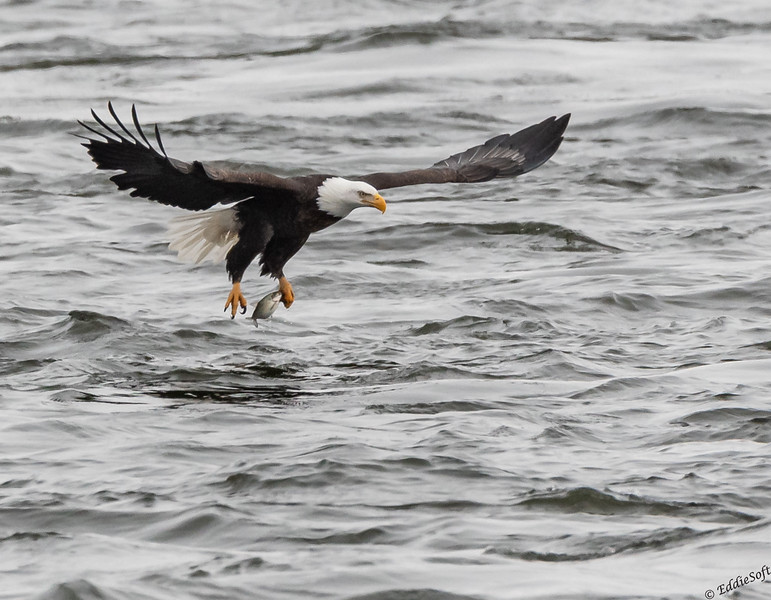 Eventually the cold won out and decided it was time to head back to the warmth of the car. 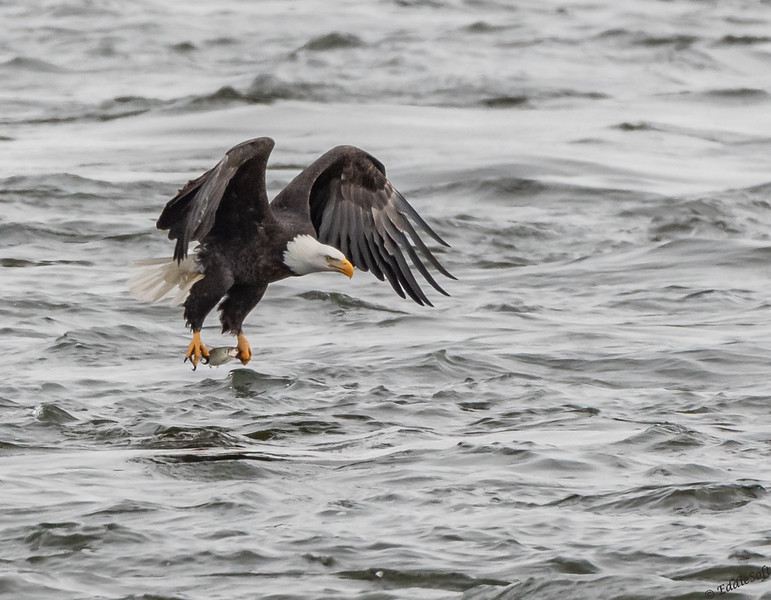 Although a welcome slight warming that day, the cold weather was still biting my bare hands. Fluffy gloves tend to make me nervous when holding expensive glass out over deep water. Unexpectedly left the thin and grippy gloves at home. Adding to the discomfort, my feet didn’t appreciate standing in the snow that long having spent all of January in Texas – not having to train in the cold weather have made the little piggies soft. BAD PIGGIES, VERY BAAAAD. 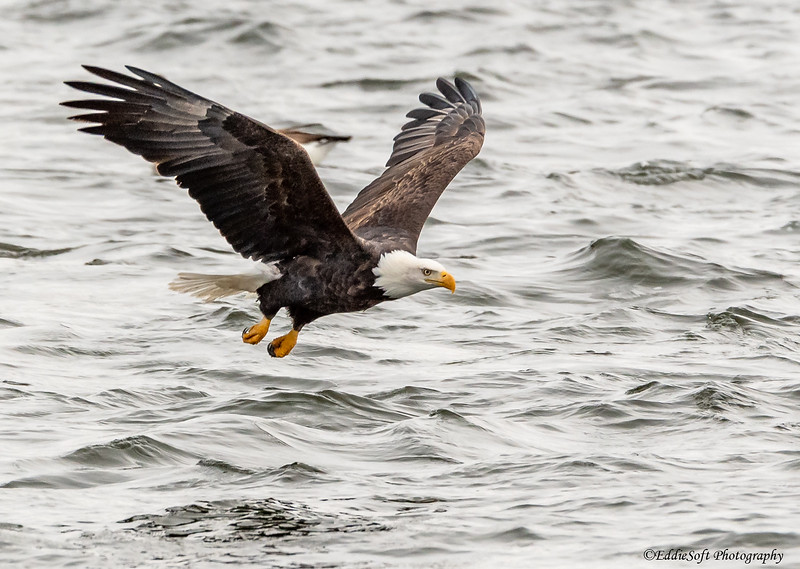 Sorry for the long post, but thought you might like to see the hauls in the action category. Might give you a break before the third part of this series with a spotlight on interesting behaviors – don’t want to bore you by over featuring a certain species.

Here’s to hoping my feet are better prepared for the next outing.