Greetings everyone.  Feels like I’ve been exploring a third world country as of late thanks to not having connectivity for the last couple of days.  Amazing how accustomed you become to being able to check on the pulse of the country whenever you have the need to dampen your mood.  Today we made it back to civilization and now have some access – sure enough, disbelief soon followed.  Not sure when or even if I’ll weigh into the current state of affairs.  For now I’ll simply mention that big tech monopolies colluding to deplatform competitors is utter bullshit.  I’ve spent my career in the high tech world and this absolutely sickens me.  So, until I opt to delve into this deeper, let’s all brighten our hearts a bit by looking at a “purdy” bird. 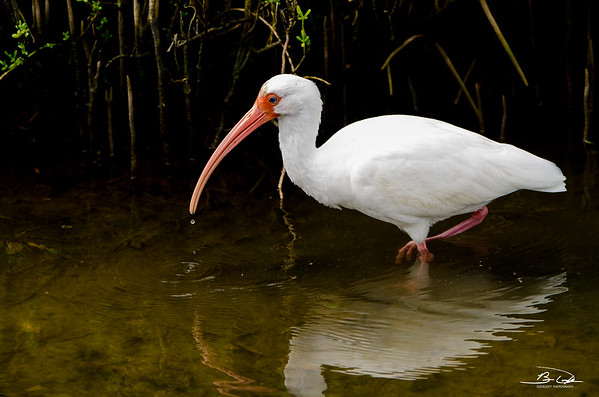 There, I can feel my concerns melting away for the moment – a general soothing, if you, will thanks to an innocent bird simply enjoying the calm marsh waters of South Padre Island.  Will get this cringe part over now… not exactly new, this series was taken on our Texas birding trip back in December 2016.  I know, I know, I promised more current material for the new year, but during our exploration mode the only material I have is what I’ve already processed and put into the holding queue.  All is good as I happen to really like this particular series of shots. 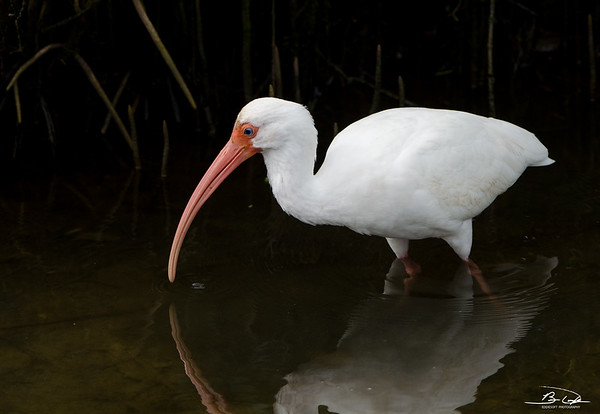 Hit the jump to see a few more shots of our pink highlighted friend.

If there is any consolation, I can assure you this bird probably looks exactly the same now as it did back then.  That is if it was able to avoid all the Gators that roam the SPI Bird Viewing and Nature Center.  Of all the prehistoric reptiles we’ve stumbled across on our many trips, the size of the Alligators that patrol the marsh banks there are some of the largest we’ve ever experienced (link here).  Note, a quick check on DuckDuckGo was unable to confirm the average lifespan of a White Ibis.  Oldest recorded wild specimen was 16 years and some change which is waay older than my back queue so, beyond unnatural causes… it is likely still poking around in the mud. 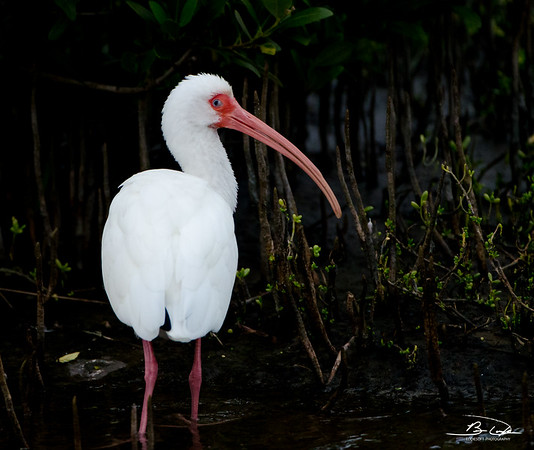 The adult Ibis is one of those birds that can be easily identified with just a few guides.  First of all, look for the snow white body with pink extensions (as in the legs and the bill).  That will knock out most of the similars with exception to maybe the Spoonbills, but we can take care of that with the remaining quick guide – the bill on the Ibis is long and downward curved where the Spoonbill has well, you can guess on what contrary style those have.  There you have it – two simple guideposts to spike your ID between. 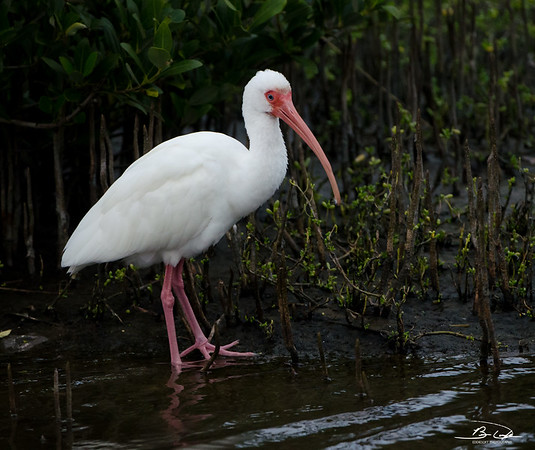 Now, Mother Nature always likes to throw a few curve balls to drive up profits for reference book publishers.  The birding community has long held suspicions there are kickbacks going on there – maybe CNN can actually do something useful and investigate that (god knows it is more informative than how many scoops of ice cream a president requests).   So, the sleight of hand on this species is the immatures start out sporting a brown neck/wings over a white breast This will morph into a mottled look in their first summer before being fully splended.   They also have a more orangie bill. 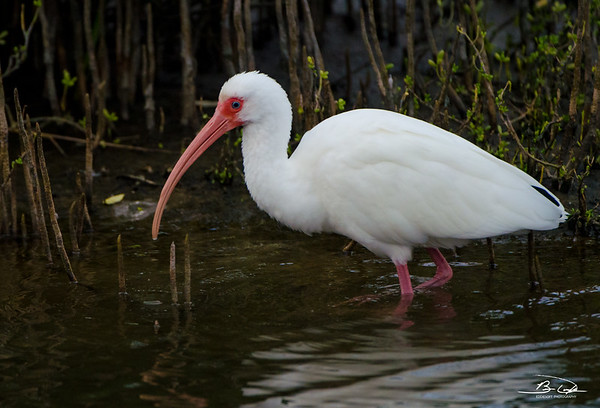 White Ibises do have black tips to their wings.  Most of the time they are prowling around in the muck with the wings folded under so you may not get to witness it unless they launch.  My favorite feature of the Ibis has to be the light blue eye coloring.  Quite stunning and always brings a bit of joy when I see them reflecting light in the big glass.  All in all, one of the more unique shorebirds that are quite prevalent along the southeastern coastline and on around the Gulf Coast.  An interesting tidbit to pass along is the White Ibis was named by German ornithologist Johann Georg Wagler and according to Wikipedia, he died of a self-inflicted gunshot wound while “collecting”  specimens.  Assuredly poetic irony to the manner in which ornithologists carried out their research back in those days.  Fitting as well, the Ibis is associated with the Egyptian god Thoth the purveyor of wisdom and blogging (which they called “chiseling” back in those days).  We would know more about those days if the political class back then didn’t go about erasing history (obelisks) whenever the past didn’t fit their agenda.. hmmm, sounds familiar.  Good to see all those years studying ancient civilizations is finally paying off – history has a way of repeating itself if we choose not to stop and learn from it.

Take care everyone and continue to keep your distance as it’s going to take more time to get through this thing.

12 thoughts on “The Purveyor of Wisdom and Blogging”