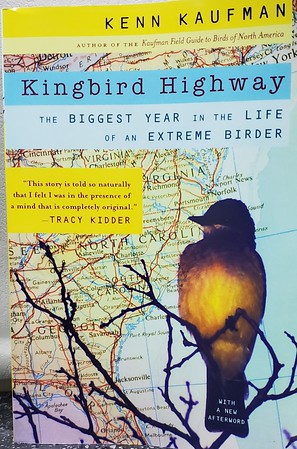 I’ve been staring at a book by Kenn Kaufman that has been laying on my desk for several months now.  Having read it in a couple of marathon sessions it was simply waiting for me to get around to posting a recollection of it.  There it sat, begging night after night for some time to meet the world.  Problem is, these recollection posts take a significant amount of time to a) to capture what I thought about it, b) review various pages to remind myself of compelling takeaways, c) do some research to personalize the takeaways and then d) get it all down in black in white.  Thanks to the first official day of the Wisconsin dog show, the procrastination has come to an end.  Today’s post is about a body of work on a famous birder.  Kenn published his book, Kingbird Highway: The Biggest Year in the Life  of an Extreme Birder, back in 1997 (2006 for my paperback copy) covering his endeavor to complete a Big Year back in 1973.  Tops of my list of birding related reading is Neil Hayward’s Lost Among the Birds (link here).  That book is an incredible read focused on the emotional healing that birding can bring.  Kingbird is now solidly anchored in the number 2 position. Like Hayward’s, I found myself unable to put the book down.  I’d pick it up for a quick nitecap and next thing I know I’m looking at very small numbers on the clock.  If I remember correctly, Ron had the exact same opinion when I originally bought him this book – he liked it so much he ended up having a copy sent to me.  After I turned the last page I said to myself “I’m not a birder!”.  Kenn sets an entirely different standard, embarking on his Big Year when he was 16 years old.  His mode of transportation – standing on the side of the road with his thumb out.  69,000 miles later he had tallied up 666 birds – three short of Floyd Murdoch, but they didn’t count his + 5 from the Baja’s which would have put him over. The stunner in all of this… the amount of money that he spent in this mission.  $50K?,  $100K?, hell $200K doesn’t sound out of reason based on all the criss-crossing you have to do across North America to even have a chance of getting the needed level of checks.  In truth, Kenn spent a staggering $1K – that is travel and living expenses for the entire year – with nearly half of that in two flights in Alaska.  Getting by on less than a dollar a day.  That my friends is an individual that can stand in front of anyone past and present and claim they are a birder.  One that is willing to eat dry cat food for sustenance and endured several run ins with police who didn’t appreciate his mode of transportation and/or his road weary look and even fended off a knife wielding mugger trying to get his cat food.  A different time for sure.  These days, traveling by thumb to see birds has a good chance of you ending up being circled by Vultures.  I did find myself asking what kind of parents he had that was okay with him dropping out of high school and heading off on a solo adventure to every coastline and everywhere in between.  He did thank them at the end of the book stating how grateful he was for them having the faith to let him follow his dream.

Kenn is a tall oak in the birding field and a regular contributor in our primary birding magazines.  Birder’s World refers to Kenn as “the person who knows more about bird identification than almost anyone on the planet”.  He didn’t get there by burying his nose in books – instead, he put himself out there and gained his knowledge the old fashioned way – experiencing it.  Do you enjoy birding, maybe even thinking about a big year yourself ?- grab a copy of this book – guarantee you will have problems putting it down, eagerly turning page after page to learn how Kenn was able to get another check on the list.

If you can’t wait to get your own copy, hit the jump to see a few of my takeaways.

10 thoughts on “Recollection: You Call Yourself a Birder?”