It is dog agility weekend which means I have plenty of extra time on my hands.  That also means I can finally get a post out that I’ve had in the queue for a large part of this year.  It may be surprising to know that book reviews are one of the most time consuming topics when it comes to to my efforts here at Intrigued.  Photography posts are pretty straight forward – root through the massive image queue, find a set of shots my readers might find interesting, process them up and then do what I enjoy most, write about the experience.  Book reports (wow, that sounds so grade school ha), do not have the image work beyond one or two quick snaps with my camera phone, but what it lacks in processing, it more than makes up for in recollection time.  I spend a lot of capital on the takeaways, the concepts, quotes, thought provoking elements etc. that was gained from the investment in time with the author.  Today’s feature recollection was so full of takeaways I was hesitant to start on it until there was plenty of time to really do it justice – so there the book sat on my desk, right next to my computer taunting me each and every day for a little more than 11 months.  Today’s the day I address this visual guilt.

As an avid reader, you soon realize there are times when you turn the last page of book and immediately think to yourself “that time investment was only slightly better than watching paint dry.  Other times you might come away with a few good nuggets that make the investment worthwhile.  Every once in a while, a book comes along that has a tremendous impact, influence and/or entertainment value.  These time are easily identifiable by the shock of finality when you turn the last page.  Almost a feeling of sadness knowing the strong bond you just made with an author has come to an end.  There are only a few books that have led to this feeling.  The Lone Survivor is one that comes immediately to mind (and some of the horror stories I was insatiably reading in grade school resulting in a warning to my parents from a snowflake teacher, but I’ll let that go for now).  Now I can add another one to that distinguished list, Lost Among the Birds: Accidentally Finding Myself in One Very Big Year by Neil Hayward.  This novel was found at the Laguna Atascosa NWR gift shop.  I like to try and help out the various birding locations we visit especially when the visit results in new checks on the bird list – and Laguna has provided me a multitude of +1’s over the years.  Admittedly, before finding and reading this book I wasn’t aware of who Neil was.  The title looked interesting and who wouldn’t want to read about someone’s Big Year.  Figured it would be an interesting read for the long ride back at the close of vacation.  Little did I know at the time, how much I would look forward to turning these pages.  Every page was a mixture of new bird knowledge, a better understanding of what it takes to try and get the most bird species checked in a single year (called a big year for the non-birders out there), personal exploration and laugh out loud humor (note, that humor may be more in tune within birding circles).  A little background on Neil.  He is a graduate of Cambridge and Oxford with a  PhD in biology – the fruit fly nervous system to be exact.  From this foundation he spent 11 years in a successful startup before deciding he needed to find himself… or at least better understand the depression that was taking over his life.  A knowledgeable birder he decided to embark on a Big Year, although, I would characterize it as a Big Year found him rather than the other way around.  One thing led to another and next thing he knew he was earning frequent flyer miles at a record pace traveling all over North America in search of new species to check off.

It is on this adventure you learn about the depression that was taking root in his soul.  At first reluctant to admit it, he slowly comes to grip with it while spending time on the best psychology couch there is –  Mother Nature’s office. Through birding he learns to understand his mental state and reveals his thoughts to the reader as he progresses through the year, discovering himself almost as fast as he was finding new species.  Along with this mental journey, Neil takes you to his most memorable birding spots, many of which Linda an I have also been to making the read all the more personal – a weird combination of elation knowing you have experienced the same bird coupled with a swell of envy as he tracks down a rarity.  Through it all you begin to realize what a saint his new girlfriend (Gerri) must be to put up with his idiosyncrasies, unbelievable amount of time away from home and his inability to commit to the relationship in stark contrast to the commitment he had to those with feathers.  This book had such and impact on me that I immediately went to Amazon and had a copy sent to my brother Ron knowing he would enjoy it just as much as I did.  Maybe he will give his opinion of the read in the comments.  I do not want to ruin the book in case you are intrigued enough to pick it up yourself, but I will reveal he does get an incredible amount of birds -in fact he had more birds checked off in the first month than I have on my life list after years of birding.

In summary, if you are a birder and want to learn what it takes to compete at a Big Year level, then get this book.  If you are not a birder but want to have a better understanding of what drives these crazy bird people, then get this book.  If you want to read about the power Mother Nature can have on the human mind, then get this book.  If nothing else, you simply want an enjoyable read, escape from the new world order of polarizing politics and crave some laughter to your life, then by all means consider Neil’s work as just the thing.  Oh, almost forgot.  If you are a birder, you will want to check out the listing in the back which has the chronological order of every species he found and where.  Like me, you will probably find some places to add to your travel plans.

By the way, one of reasons this book caught my eye in the gift shop is that Neil had signed it! 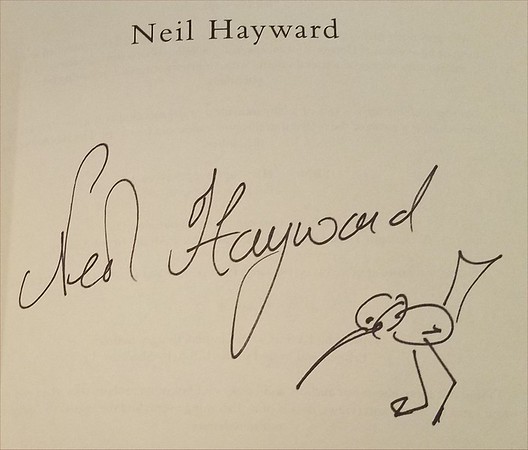 Hit the jump to see my takeaways – note, there are some spoilers in there, so if you are considering picking up a copy for yourself, you might want to wait to read these until after you have had a chance to feel the remorse when you turn the last page.

Here are my takeaways:

7 thoughts on “Recollection: Lost Among the Birds”