It appears this may be an apex week for the virus in the States. Based on the numbers I am seeing there appears to be some nuance of stabilization in the hospital numbers which seems right as I am pretty convinced the models that are being applied are way over estimated. I’ll spare you my soapbox regarding social distancing in urban cities equating to invasion of personal space for those of us naturally separated by 10’s of acres out in the country. Instead, I’ll continue to build my birding confidence back with another fairly easily identified feathered friend. 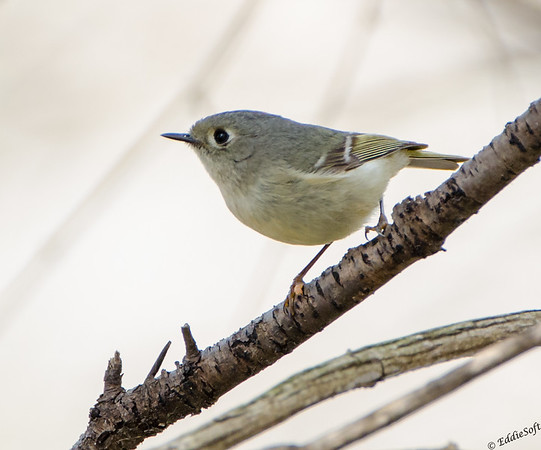 Hit the jump to reveal a secret about this little guy.

100% cute from the end of its tiny tail to the equally miniature bill. Problem is trying to get a picture of one of these creatures in the tin. Fully aware of how frustrating it can be for people carrying big glass into the field, this species goes out of its way to hang out in densely populated thickets and trees – trying to get dialed in on the target with everything in the shot trying to grab the focus is bad enough, but then these birds must spend every waking hour mainlining caffeine. Land, flick tail, dart away, perch, flick tail, dash off to another dense area in complete disregard for the sanity of the nearby photographer. Thank god for the digital age as the digital darkroom floor is littered with blurry shots of tree limbs – although I am pretty sure one of those shots were of a Yeti and is going to make me millions. So you might be thinking to yourself, where does that easily identified comment come into play. Well, I’ll let him reveal why. 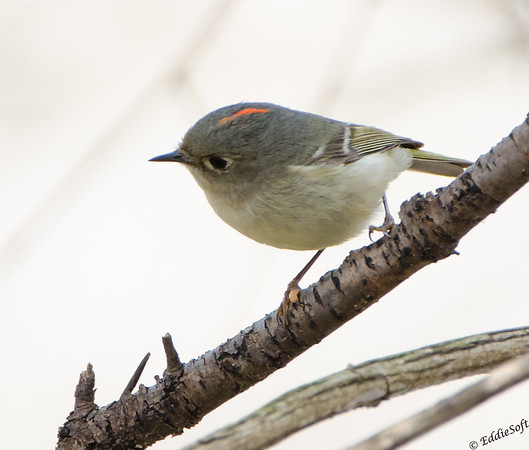 Granted, if the specimen isn’t willing to expose their crown it could be a bit harder to distinguish. There are lot of small birds adorned in the olive-green palette and unfortunately, many of those are also speed freaks. These males are also generally shy about revealing their ruby crown. Then, when they do decided to throw you bone, you still have to manage to get it in the tin. Many variables, many opportunities to blow it (although, apparently a good chance of getting a Yeti instead). In fact, my first post of the Ruby-Crowned Kinglet (link here) didn’t have a single image of it. By the way, Cornell’s website has an awesome shot of one in full flare. Not to give too much foreshadowing as it is currently planned to be posted somewhere around oh, let’s be optimistic and say June of 2025, but I was able to photograph one while we were in Vegas last February. A male was showing off to a female giving me multiple opportunities to tin it (fingers crossed I could get a clear shot through the bushy tree it was bouncing around in). Did I mention these Rubies have a cousin, the Goldens (link here). Good news, is there are a few field markings that can help distinguish them. The easiest for me is the eye. If you get a glimpse of that, the one with the broken white eye-ring is the Ruby where the Golden sports a white eyebrow instead. The Golden also has large black stripes that border their bright yellow crown which looks more like a black cap when not revealed. 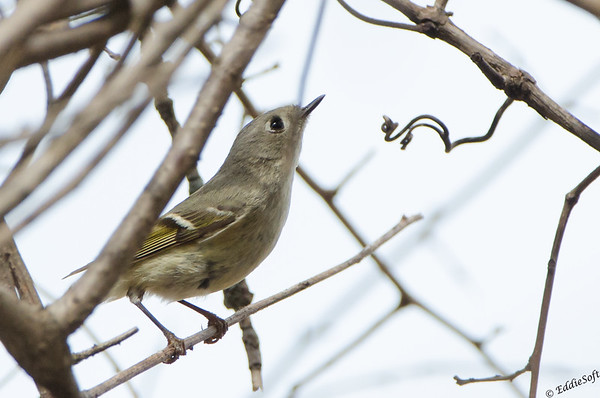 By the way, if you are having trouble distinguishing it is a Kinglet, look for the white wing bars with the rear one bordered by a black stripe – probably good to go. Fortunately, for those in the States, both the Ruby and the Golden are widespread so you should be able to enjoy them wherever you happen to be. A quick check of interesting facts on Cornell’s site didn’t result in any mind blowing takeaways. The females can lay up to 12 eggs at a time … yes, that is a 1 and a 2 for a bird that measures in the 4″ length range…ouch. Guessing when you have such a brilliant jewel on your head you don’t need a lot of other frivolous facts to muddy up your bio. “Fear my crown you birder pheasants!! I shall eat the tasty morsels of insects, for you “Qu’ils mangent de la brioche”.

Will call it a post there. Today is a personal turning point for me as I managed to get my first miles pounded out on the road – been a long two weeks of trying to keep the crazies at bay while I nursed the body back to health. Lot of work to go to get back to half marathon shape needed by the end of this month.. baby steps, Stay strong everyone!

9 thoughts on “Good to be the King”