Here we are at the feels like day 2,882 of the Illinois lockdown. All I can say at this point is our political leadership has gone full on batshit crazy. Can barely stomach the news anymore and the next entertainer that thinks I give a crap what they think is going on my “never again” list. Trust me, you do not want to be in the customer facing business and be put on my NA list. Unfortunately new adds these days are already starting on page 52. I was sitting here thinking to myself how nuts this whole thing and one of these specimens flew by the window I was staring out. 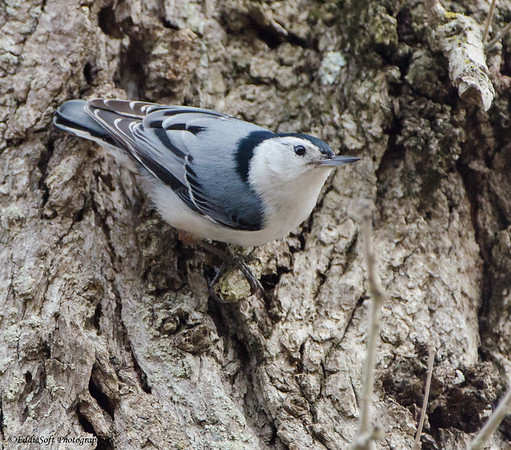 Now that is a sign if I’ve ever witnessed one. Mid-thought on the pontificating nutjobs and a Nut – a White-Breasted Nuthatch lands in a tree near our porch. Yes Mother Nature that is a perfect metaphor for our current situation. My camera was too far away to bring to bear on our new visitor (that being it was sitting about 30 feet away ha), but I was pretty sure there was a series in the queue that would do fine. Sure enough, with a little digging found a suitable stand-in. Honestly, was a bit surprised to find only one specimen in the queue as just about every common bird in our area has a couple sets just waiting for a chance to be revealed to the world. The only question is how far back do I want to go 1990, 2000, 2010 hehehe. Our lone entry today takes us only back to April, 2017 – a mere 3 years ago which is about when my broke state imposed its lockdown. Ron and I were checking out the inhabitants of Chain O’ Lakes State Park in Spring Grove, IL. A nice park that happens to be relatively halfway between us. Linda runs the kids in dog agility up there so I tag along to do a bit of birding. Always a fun time when Ron can join me, although finding a bird, snapping a shot and then scaring it off before he sees it is getting harder and harder (did I write that out loud ha). In this case, pretty sure he managed to tin this specimen. No gain on the bird count, but still an entertaining little bird (that, for a fact, has never felt obligated to preach to me). 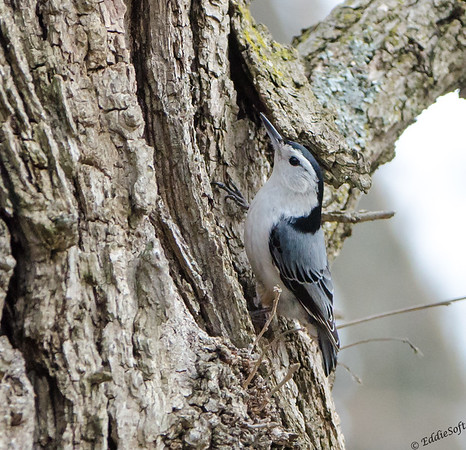 Hit the jump to see a few more images of our featured Nutjob.

There are 4 varieties of the Nuthatch that claim residence in the US. I have managed to tin 3 of the 4 up to this point. Of course, the White-Breasted variety seen here, the Brown-Headed came courtesy of Texas (link here) and then the Red-Breasted which was earned from a trip along the Minnesota Lake Superior coastline at Split Rock Lighthouse State Park near Two Harbors (link here). The remaining one, the Pygmy continues to elude me. It doesn’t help that the region maps for that tiny variety looks like someone pointed a shotgun at the western half of the US. How about branching out a little more eh Pygmy!?! As if I have room to talk right now). In contrast, the White-Breasted can be seen every single day at my feeders, grabbing sunflower seeds to haul off and bury in the bark of their stash tree for later “hatching” or as Cornell puts it so vividly – “whacking them with their sharp bill” to expose the seed. Usually do not get to actually witness that so will take that on their authoritative bird reputation. Now, what I do see them doing all the time is their other signature trait – scampering down trees headfirst. 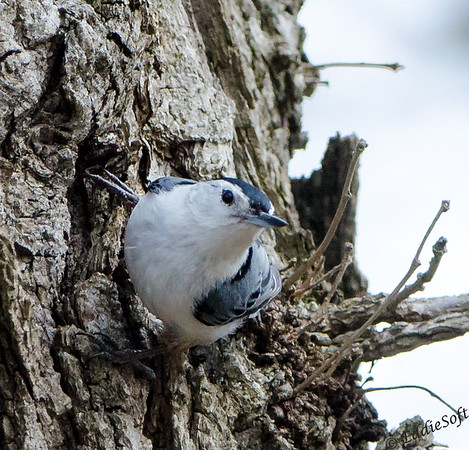 If it looks like the bird participating in the Olympic ski jumping competition, you are either looking at a Nuthatch or maybe the Brown Creeper (link here). Trust me, you will have no trouble distinguishing between the two. As the name suggests, they have a large white breast underneath and a nice blue-grey feathering above. Males sport a blacker cap where females are more of a lighter grey. They both have rusty/chestnut coloring underneath towards their tails. Apologies but none of my angles show that feature very well. For Ron’s sake, I did manage to get the full back perspective – even checked to make sure I didn’t have the image mistakenly turned upside down noting it was pointed up like a normal bird. 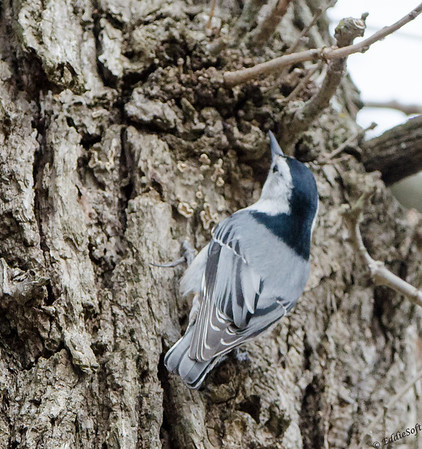 I tried to find some interesting tidbits for your takeaway benefit and decided the items that were available were not worth your read. Noting that they are aware of one living to be about 10 years old didn’t seem worthy of the 15 minutes you spent reading my ramblings. Hopefully you received some enjoyment of what real Nuts look like out in the wild. Be vigilant everyone, wash your hands, refrain from sucking your fingers or sticking in your eyes and most of all stay positive (as I was positively ecstatic I made it through a 4.5 mile run today… another day, another mile and eventually I’ll be back on schedule).