It is finally thawing out a bit here in the Midwest. Although we did get a nice covering of sleet followed by an inch or so of new snow, I am pleased to say we are up in the 30 degree range. Feels like a heat wave based on what this area has been experiencing over the last couple of weeks. Admittedly, we did escape some of that with a trip back to Texas over the holidays. I would have preferred staying around, but we had to head all the way down to the southern tip of Texas to find new fodder for the blog – the hardships we bloggers have to do to keep our loyal readers … sorry, I could barely type that from laughing so hard. Trust me, I jumped at the chance to get out of the negative double digit windchills even if Texas was experiencing colder than usual temps. More on the fruits of that labor to come. Right now, thought I would feature a surprising +1 to the Birding List. 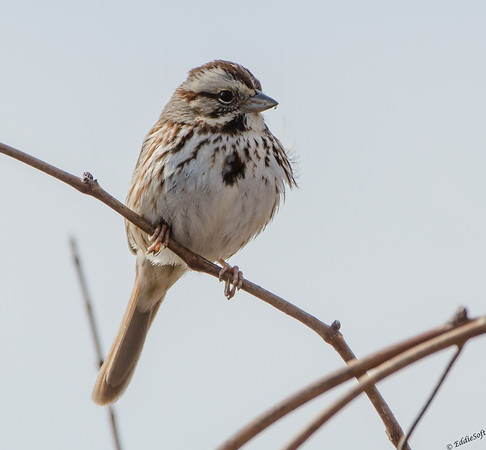 Now, surprising not so much on the specific bird, because it is likely you have had the pleasure of seeing one of these anywhere in the US and a significant portion of Canada. The surprising element is the fact the Song Sparrow is so common in these parts I was shocked when I noticed it was absent from my birding list. This bird is so frequently encountered on my bird outings I typically do not even bother taking pictures of it anymore. Had I known it wasn’t checked I would have spent some extra time to get better shots (will keep this in mind next time out in the field). 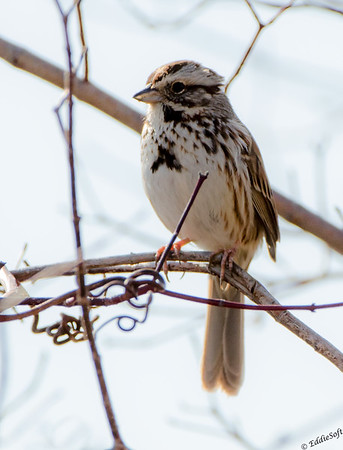 I call this scenario the “Bison Effect”. If you have ever been to Yellowstone with your camera, I would bet you spent a significant amount of time on your first visit snapping every Bison you came upon. Probably filled up a couple of digital cards before traversing more than 5 miles. As the day went on you started becoming more selective – maybe this group had a calf. By end of that trip that Bison better be doing backflips over wolves before you will even consider bringing that camera up to your eye. Same goes to these common Sparrows. Out for a long birding day and those songs will be haunting you for weeks to come. 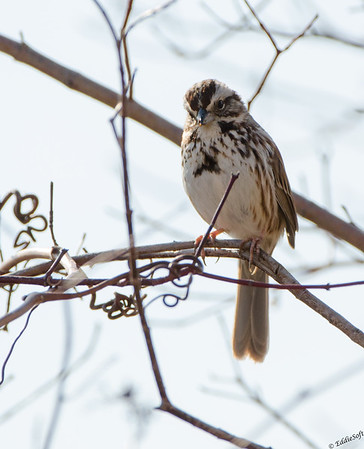 There is a slight exception to the Bison Effect. If the Bison is the ONLY thing out and about that day (not even a squirrel bothers to come out to say hello) then you have to make the best of what you have and therefore go ahead and shoot the hell out of that Bison…unless there happens to be an interesting mushroom in which case the Bison Effect is still relevant hehehe. This Song Sparrow specimen was encountered on a trip up to Baraboo Wisconsin in April 2016. More specifically, likely in the back woods of the International Crown Foundation. We never pass up a chance to visit the Cranes at ICF. After checking out the various displays, we tend to hike out in their woods for a bit of forest/marsh birding. My guess there wasn’t much moving out there (nor apparently any fungi around). Nothing left to do than take a few shots of the Spot. I had to laugh when this specimen mocked Kate Wisnlet on the bow of the Titanic “I’m Flying”. 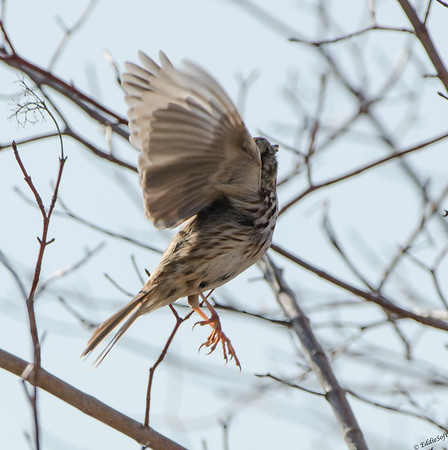 Being a new bird, let’s leap on over to Cornell and see what interesting facts I can share. First, they note it is the most familiar Bison in North American – oops sorry, Sparrow in North America. I was not aware of all the slight regional variations. Maybe I should be more attentive to these differences in the field while visiting other areas. Was excited for a bit when noticing the large section of cool facts only to be disappointed by rather boring content. Guess I’ll just close with they have a large dark spot on their chest “taaa duh”.

To be honest, there are a lot of Sparrows (and Gulls for that matter) that are not checked off the Birding List yet. This is primarily due to how difficult it is to ID them. Any birder will tell you, when it comes to juvenile Sparrows, you might as well put on a blindfold and throw a dart at the reference book. Luckily there are few with very distinct marks like the spot on this Sparrow that make it a bit easier.

Time to get back to the College Football Championship Game – take it easy, see you again real soon.