Last post you were introduced to a mother and chick Osprey that we were able to shoot on our North Carolina trip in July 2014. As luck would have it, we are still under a monsoon out here in the Midwest putting most of my planned outside work on hold, but still leaving plenty of worry as my 46′ free standing bridge over our creek is officially under water. Not a lot I can do about that right now, hell, I can’t even get to it as the end is currently sitting 20 feet out from the water’s edge! My fret is your gain allowing me extra time to crank out another bonus post. 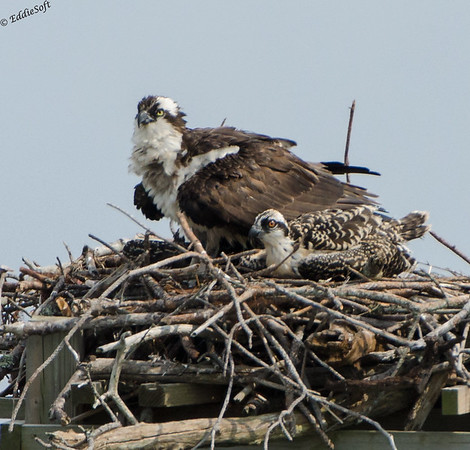 This shouldn’t be a surprise if you noticed the last post title had a clue – that was not the only mother and chick Osprey sighting we were able to witness in Tarheel country. We were checking out the various sites in the Outer Banks area when we spotted something interesting in the parking lot of a restaurant. This eatery happened to sit on a water inlet and like the shots before, had a man made mast that had been claimed by another Osprey mother. 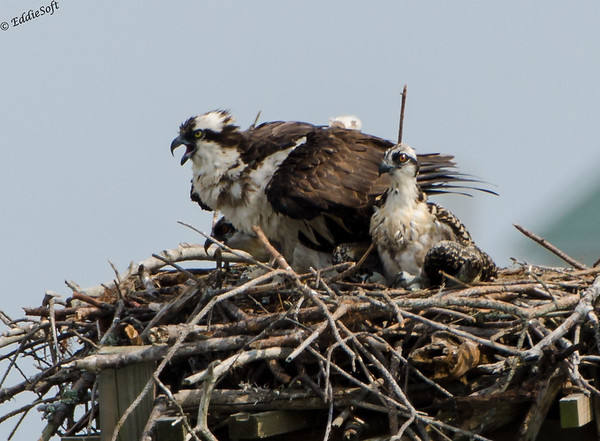 Hit the jump to see the rest of the shots from this second sighting – and there’s a surprise!

I was a lot further away from this nest, having to shoot from the parking lot’s edge to the mast. Initially I was using a set of nearby rocks to help steady the camera in place of a tripod (didn’t take the time to drag it out of the back of the RV). There I happily sat shooting away until my eyes caught things moving about – turns out my shooting perch was home to a crap load of crabs – eeesh, that prompted a quick change of locations. 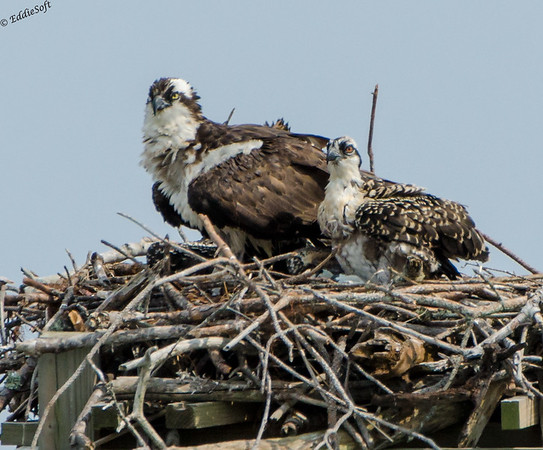 The unexpected pincher encounter ended up being hilarious entertainment for mother and chick. Quite the laughing stock for the local aviary. This particular chick looked significantly younger than the previous one. Not sure how to really guesstimate their age other than cuteness level. The younger the cuter in my book – the older they get they start to take on that demon killer persona that must scare the scales off of unfortunate fish that come into their kill zone. This one was still cute. 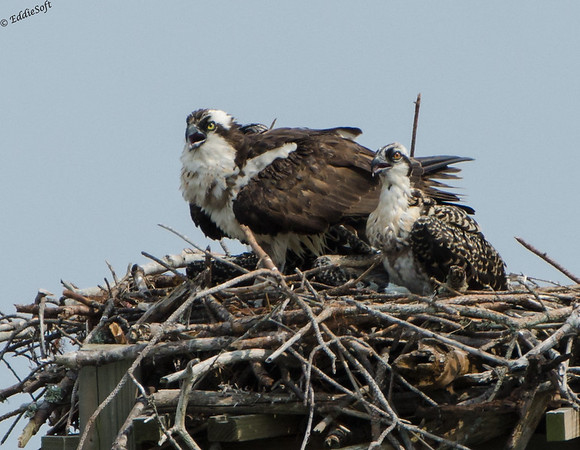 … although they were having way to much enjoyment making fun and laughing at me! Look at those disparaging laughs – “I taught you a second time you stupid human”

Now with a pincher free shooting spot, I could enjoy the precious scene of mother and child. Happily taking shot of the single chick being protected from danger by an ever watchful mother. Every once in a while the mother would make it be known that she was up for business should the need arise. 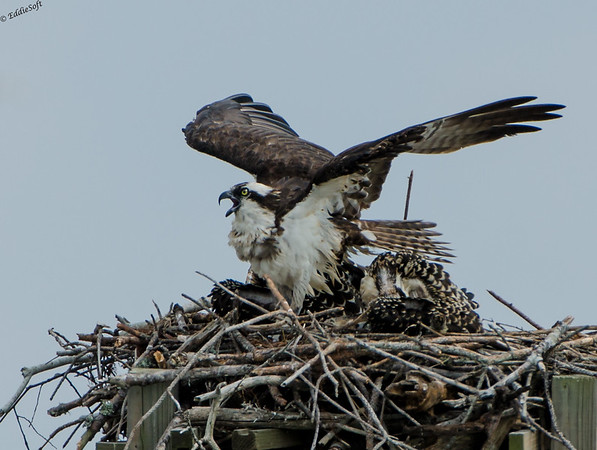 Then I was met with a major surprise. Completely unexpected, a few more eyes came out to see what all the laughter was about. From a visual perspective, these additional siblings looked older than the one I was enjoying photographing minutes earlier. That being based on the fact these looked a bit meaner ha! 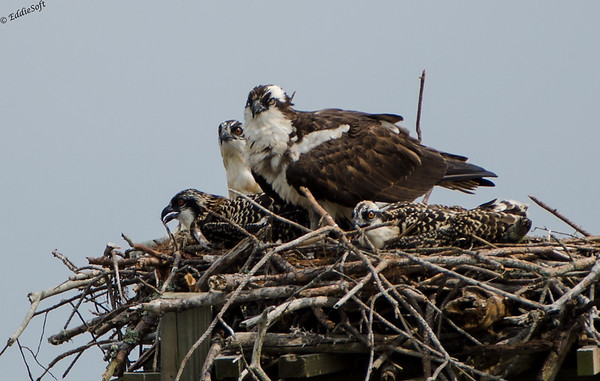 For an offbeat location like a restaurant inlet, this turned out to be a great opportunity. I had gone from no chick sightings, to a single chick sighting to a THREE chick experience in a matter of days. Also found it interesting there were no other observers in the parking lot – maybe it is so common down there that it has lost its luster. By this time, the younger chick had grown tired and pretty much checked out for the rest of the shoot. The older siblings became much more active and would continually call out to something they were keeping their eyes on. Figured it was just imprinting from the mother, but eventually figured out what all the interest was. 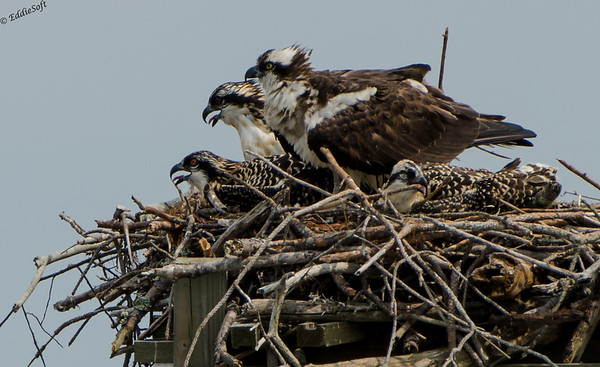 They were, in fact, letting their extended protection element know that there was a potential threat lurking below. Either that or they were ordering a food delivery. Unbeknownst to me their father was not far away also keeping an eye on his family and checking off any concerns to their safety. On a self reflection, I need to pay better attention to my surroundings. 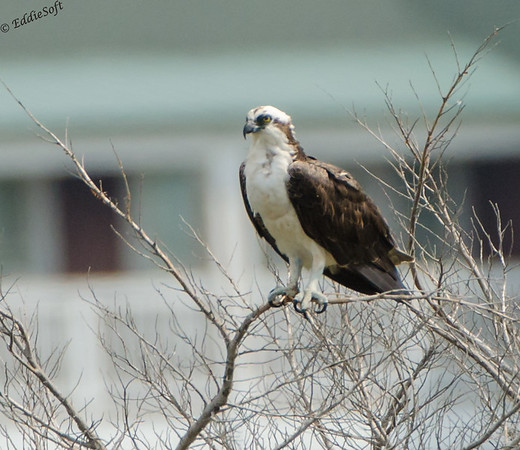 These father shots are a bit soft – lighting was not ideal where this dude was sitting and it was perched a lot further away from my glass. Guessing The Beast was struggling to pinpoint the focus with all the branches in the area. Did I mention he was threat assessing every angle – and yes, that included me. 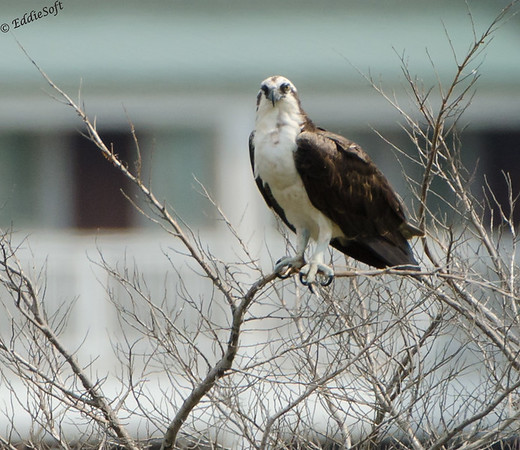 Then I got the sign – the “Hey you in the parking lot pointing that big black barrel at my family. If you take one step closer to that nest I’m going to take these razors on the end of my feet and carve my initials in your forehead – any questions…. I thought not” 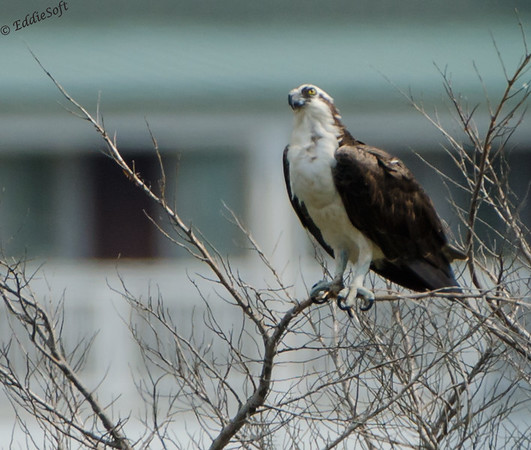 Well, that pretty much closes out my Osprey mother (and father) and chick series from the North Carolina trip. Hope you enjoyed seeing the shots and much as I enjoyed the experience. Have a good one everyone – time to go see how the bridge is holding up.