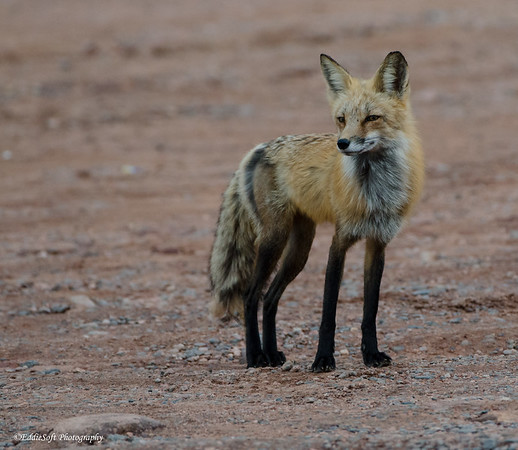 Decided to do a quick check and sure enough, Foxes do eat birds so we can dispense with the likely. I must admit, that my bird knowledge far outweighs my Fox expertise. To the best of my knowledge bolstered by a healthy dose of Google searches, this specimen is a Red Fox. I was also able to find a few shots on the web that had the dark leg markings. That feature was confusing me a bit since our local Foxes do not seem to display that amount of darkness. The other interesting feature can be seen in the hindquarters. 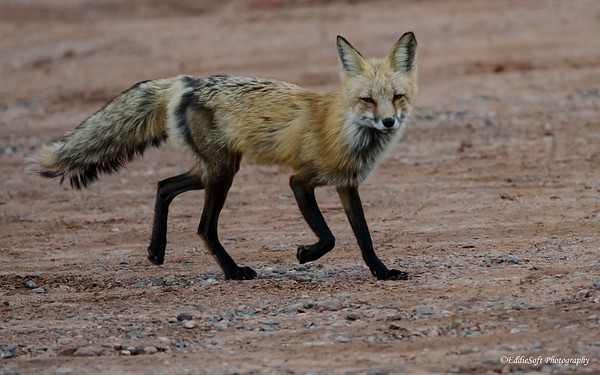 Hit the jump to read a bit more about this encounter!

As you probably noticed (with some nudging) that this vixen is missing some fur. First thought was mange, so did some quick research. From the pictures found there and the descriptions, it is difficult to say if that is the case. Like their Canidae brethren, they do shed their fur, but would expect this to be a little more uniform across the entire coat. The tail is still really bushy, the shoulders/upper back still looks good and those ears are still cute as hell. For my peace of mind, I am going to assume this is not mange and that there is a better explanation. Here, let’s go with this angle – super cute

There is an interesting story with this set. Like the last post, it was taken at Red Rocks Amphitheatre outside Denver, Colorado back in May 2014. Now you might have the impression that wildlife photographers spend their day trudging through choking foliage, fending off hordes of blood sucking mosquitoes, braving the elements and risking life and limb to get that priceless shot of animals in the wild. Well, you are right for all my other shoots (ha!). Coming clean (after getting all muddy and bitten on my last outing), this Fox made it very easy on us. On the first visit, we arrived in late afternoon after the Agility Dog show Linda and the boys were participating in completed. Not knowing the area, we first visited the Visitor Center (novel concept) and grabbed a map. After hanging out there a bit, we headed up to the Amphitheatre parking lot – think we ended up in the parking lot directly down from the box office. There were only a handful of vehicles in the lot, so we grabbed a front spot and got out for a look-see. No sooner had we exited the vehicle when this vixen was spotted making its way from the far side of the parking lot right towards us. Standard course of action, grab camera – take lots of pictures. Without a care in the world, she came all the way across, veered slightly to give her some distance from us and then proceeded onward. 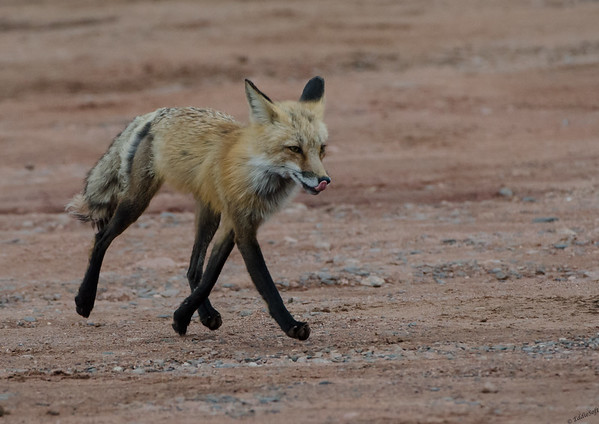 Definitely accustomed to being around a lot of loud and screaming people that fill this place come concert night. Eventually she made it to the rocks on the edge of the lot and quickly took a position on top of the largest boulder. From this advantage, she surveyed the area, checked off any threats and then lost herself in the brush never to be seen again. It has been a couple of years now and hoping this vixen is still working as the Red Rocks greeter.

Come to think of it, the last time a Fox was featured on the blog, it was also in an easily accessible area – in a pull out in Yellowstone National Park (link here)

5 thoughts on “A Sly Red at Red Rocks”