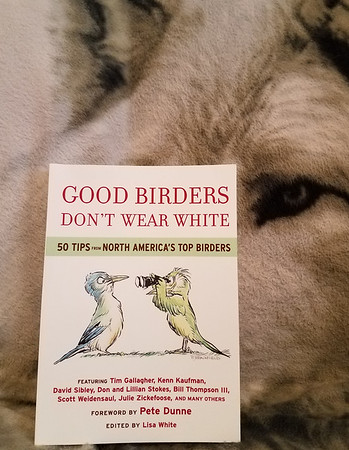 Turns out February was a very good month for getting through my reading queue. This is the first of no less than 4 books that had all their pages perused and turned. Granted one of these books was for pleasure only – a rarity since I like to try and get something out of my time spent with an author. One of the books covered war photography and the other two had a bird theme. We’ll get to the other three books soon enough, but let’s start with one of the bird related ones. Today’s featured recollection is about a book entitled Good Birders Don’t Wear White with a subtitle of 50 Tips from North America’s Top Birders. This sounded intriguing when it came up on an Amazon search for something else I was looking for. Ended up adding it to my wish list which Linda used for a birthday gift. Unfortunately, she purchased two of them accidentally thanks to a shopping cart snafu. Rather than bother with returning it, my brother Ron ended up getting some extra reading material. There were big expectations now that it essentially cost us double – Ron, don’t read this review if you had your heart set on reading it.

The format of the book is a series of magazine like articles from a number of well known birders (and a bunch of others I probably should know based on their bios at the end of each article). Each author is given 4 to 7 pages or so to bestow pearls of birding wisdom on the reader. The book is actually very short so each is a quick read which worked out perfectly for my pre-sleep reading material. Take in a few different authors and hit the lights to be ready for the next day’s grind.
Edited by Lisa White. It didn’t take long to get through the 261 pages – each tip is a fairly easy read but the real speed element was a result of content – felt like I was rushing through it to actually get a tip that wasn’t obvious or trivial. As far as 50 tips go, it should have been titled 4 good tips buried in a sea of words. Maybe I’ve just been birding too long and the experiences and knowledge has built up more than I thought – would be interesting to see how a new person to the birding world would take to this advice. As noted, there were a few good nuggets like recommending you buy a Duck Stamp to help out conservation efforts, pishing to draw birds out of brush and confirmation that talking to people about birding is a good thing (take that Linda!). However, these are countered with a multitude of tips ranging from the absurd (cranking bird songs through your car stereo) to the insane (recommending I sketch a bird in the field when I have a perfectly good camera with me). In summary, I will add a 51st tip – if you have spare time to read a book related to birding, spend that valuable time with another product – something like Arthur Morris’ book reviewed last time (link here).

You can see some of the takeaways for this book below after the jump, but all in all, this was a disappointment.