Been a while since my last post – my fault – sorry about that.  I thought things would calm down this month, but once again, victim of over optimism.  There are so many things in mid progress around the house that it is a labor just to decide what to work on.  Just like running, one foot in front of the other and eventually there might be light at the end of the tunnel.  Every once in awhile there’s time for relaxation – what better way could there possibly be to spend those special times other than thinking about kicking back on a beach. 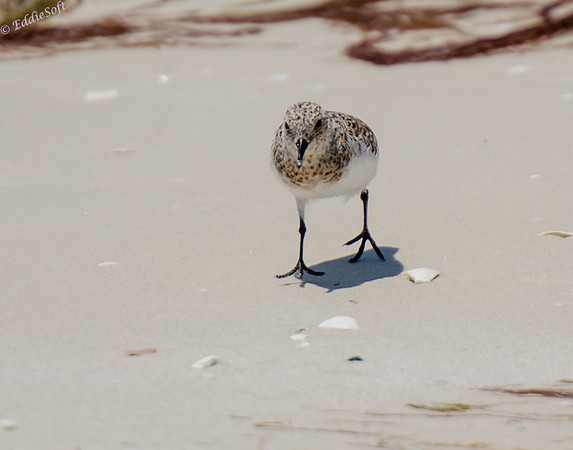 A Florida beach to be exact!  The pictures for this post have been processed for some time now.  The reason for the delay is I wasn’t entirely confident on what it was.  These shorebirds are a major pain in the ass unless they have some easily identifiable characteristic.  Medium build, brown and white with a relatively normal bill is about as average as you are going to get for peeps.  Page after page brought up more and more options.  The region where this was taken, Ft Myers, narrowed it a bit but still too little confidence to present it to my readers. 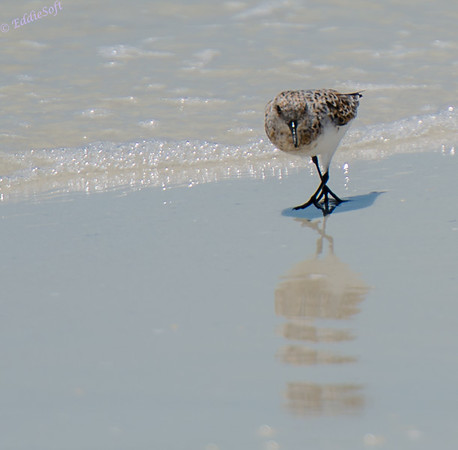 Hit he jump to see a couple more pictures and find out what this beach comber is.

In times like these I go to my trusty resource.  No, not the multitudes of reference books on my shelf – nope, this one requires the aid of my brother Ron.  My best guess at the time was a Sanderling based on the best matches in the books and a nights of looking at Google images.  His first thoughts were in agreement with the Sanderling option but was also considering the Semipalmated Sandpiper.  The good thing is either one would be a +1 for me so good news regardless of which direction.  I continued looking at the options along with the new Semi option.  Definitely close, but still leaned to the Sanderling.  On follow-up Ron came to the same conclusion – Sanderling it is and a new check on the list – yeah 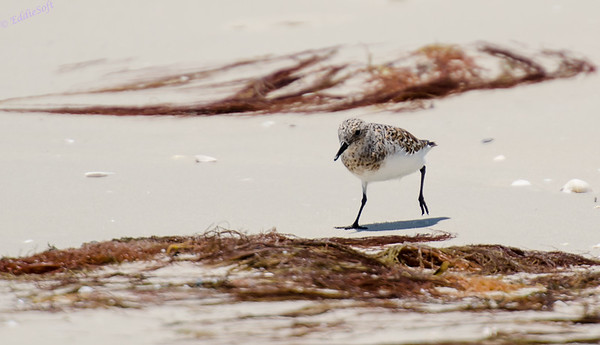 So, what do we know about these cute little creatures.  They head to the High Arctic tundra to breed and then migrate down in the fall.  As noted, by Cornell, they hang out at the shorelines chasing invertebrates that wash in on the waves hitting the beaches.  It is really quite the sight to see them chase the wave back probing the new wash only to run like hell as the next wave comes a crashing.   Quite the nimble bird for being so plump.   Looks like the non-breeding Sanderlings are smart enough to skip the long trek to the High Arctic and instead stay in their Summer locations – guessing pumping iron and working on their tans to score the honeys for the following year! 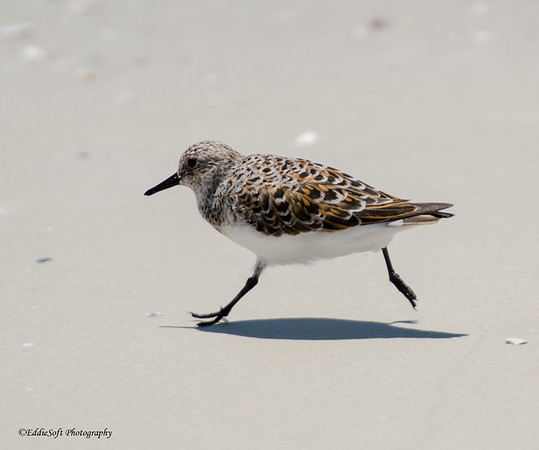 Lastly, Cornell indicates that when they are threatened they abruptly hit the skies as a flock maneuvering erratically to confuse predators like Peregrine Falcons which have a taste for these plump birds. All out of pictures, so I’ll go ahead and wrap this post up.  There’s pavement to be pounded tomorrow and based on the 9+ hours of power washing (and another 3 last night), I better give the muscles a good rest or they will exact their revenge on the hills.  Take it easy everyone, see ya’ again real soon.