Greetings everyone from the blistering hot Midwest.  It’s been a tad on the bake side as of late – not so much the actual temps since those have been ranging in the high 80’s to low 90’s, but the feels like temperature has been a test for the internal thermostat.  Ever since my heat stroke episode (link here), my body has had the nasty habit of panicking whenever it thinks it is going to overheat.  It is kind of intriguing in the sense I’ll be running along in one of my training runs and all of a sudden I’ll go from expected levels of sweat to totally soaked.  The doctors warned me about this happening and I’ve been trying hard to get it reset.  The only way to do that is to keep at it – it is definitely better in the sense it is taking longer at higher temps now before the panic sets in (for the last couple of runs the feels like temp has been tipping the hundred mark).  The Bix 7 race is always a good test of your cooling mechanics since that is traditionally as hot as it gets for the running circuit.  A week to go before that race so fingers are crossed.  In the meantime, I’m sitting here in the air conditioning at a dog show getting a few posts out of the way.

Today’s featured critter falls under the category of “Cute as hell!” 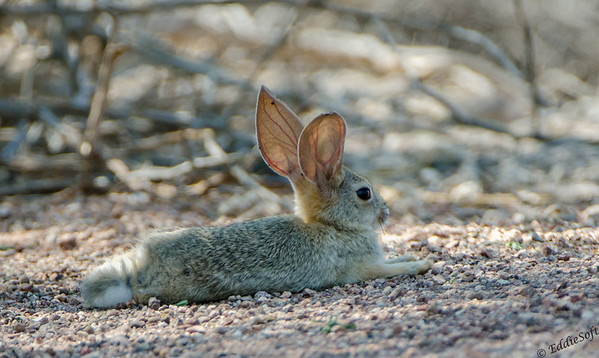 This ball of fur was just hanging out under some trees enjoying a hot Nevada day at the Henderson Bird Viewing Preserve.  Taking it all in, clearly too young and carefree to realize the dangers it will face in the coming years from all the predators that lurk about the area.  In case you do not know your bunnies (and not talking about the ones on the top shelf of your local magazine store), this is a young Jackrabbit.  They have actually been featured previously on the blog because… say it with me – they are just too damn cute to ignore (link here).  Pretty sure it is the long ears, or fluffy tail or maybe the large round eyes or that button nose … or more likely the fact that all those characteristics reside on a single creature that make them irresistible.  Unlike most animals, these Jackrabbits are not just adorable when they are babies – they still tug at the hearts as the years add up.

Here’s a quick little fact in case you are a crossword puzzle or trivia person – Jackrabbits are technically not rabbits – they are members of the Hare family.  Although both are members of the Lagomorpha order of mammals.  The Jackrabbit name is therefore a bit of a misnomer.  There is some easily discernible differences – the easiest of these simply being the relative size of the ears.  Hares have very large ears as you can tell from the images here.  Angled right, they can probably pull in channels from two states away. 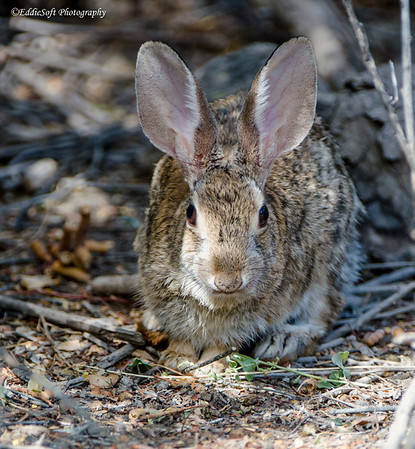 Some of the other differences are a little harder to tell.  For one the Hares are generally larger which again, is hard to tell without a side by side comparison.  Along with the overall larger size, their feet are bigger and their hind legs are much more powerful.  I’m sure those come in handy while trying to fend off the Coyotes, Foxes and Hawks that consider them a delicacy.  On the similarities side, both Hares and Rabbits are quite prolific.  They have 4 to 8 litters a year with 3 to 8 per litter – guessing this is similar to the survival characteristics of frogs – produce them like crazy and hope a few make it to adulthood.  In case you are wondering, they generally live about 6 years in the wild, gestation is in the one month range and they sexually mature in 6 months.  And now for my second favorite shot of the set (the first being the initial image)…

CUTE!!!  Just some parting facts to strengthen your knowledge for trivia night.  Rabbits are altricial meaning their young are born blind and hairless.  Hares are born with the ability to see and covered in fur allowing them to fend for themselves much sooner than Rabbits.  Young Hares are called leverets and Rabbit young are given the moniker Kit or Kitten …. or as the masses refer to them as .. bunnies.    Males are bucks and females are does.

Unfortunately, I’m out of pictures.  Since I am sure to have future posts of these Hares in the future, I’ll leave some more interesting facts for those future posts.  Until then, have a wascally good day!