Let’s see 1, 2, 3, 4, 5… Holy Crap! I’m going to make it a whole day early.  I just high-fived myself.  Not only did I once again beat the quota demon, but the ditch became my bitch today and now the main driveway path is open for business.  That victory will be short lived when the body is begging for mercy shortly into tomorrow’s training run in the Quad Cities.  It’s difficult enough in those hills when I’m fresh.  How about we just put future concerns out of mind, live in the moment and enjoy this final post of the month.

I’ve posted a number of shoots from my favorite Havana IL birding hotspot Emiquon.  This set of images closes out the set of images taken back in April of 2015.  Before last night, this was just supposed to be an average set of birds none of which were new to the checklist.  That all changed thanks to a confirmation from my brother .. more on that later.  Right now take a gander at a classic pose from a Red-Winged Blackbird. 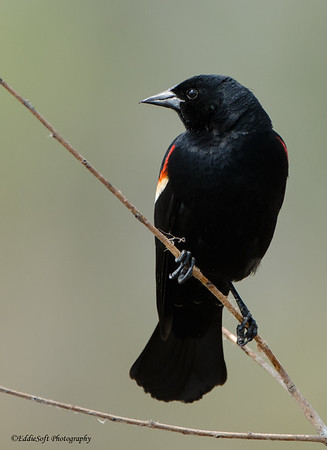 Pretty birds but the fact they are total assholes to other birds and any humans that get too close take a lot of luster off that shine.  Oh, and they are EVERYWHERE around here so, like the Bison in Yellowstone, once you have a few pictures in the tin you simply acknowledge their presence and keep the finger off the shutter.

Next up, one of those love hate relationship birds.  I always have a sense of dread whenever I shoot a Sparrow.  That is primarily due to how much pain and agony will be involved trying to identify it back in the digital dark room.  I lucked out with this particular shot since this one is pretty easy to identify.  Ladies and gentlemen, say hello to the White-Crowned Sparrow (thanks again to Ron’s confirmation).

This one was working it for the Beast.  “It makes no difference if you’re black or white If you’re a boy or a girl If the music’s pumping it will give you new life You’re a superstar, yes, that’s what you are, you know it”

Hit the jump to see the special surprise!

So, the identification process is the “hate” part, but there’s the “love” side as well – when you take that shot of another brown jobber and then find out it is a NEW bird!  Everyone knows by now my golden rule of birding – if it moves shoot it.  That means every sparrow makes it into the tin without question.  Normally this turns out to be a Chipping Sparrow or a House Sparrow or some other common Sparrow.  Imagine my surprise last night when I saw this specimen sitting in the queue. 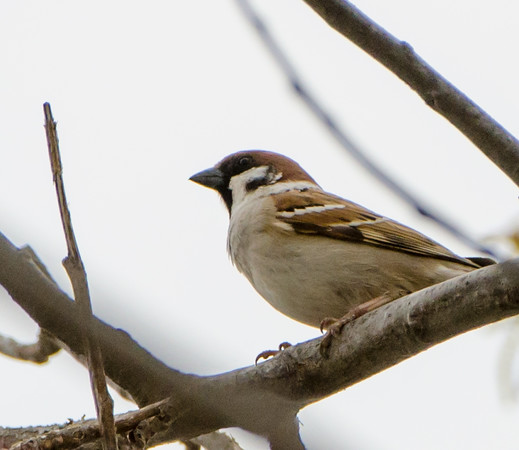 For a few seconds I was thinking House Sparrow.  In fact, when I loaded up this image into a post draft I was thinking that exact same thing.  Two things stood out as odd.  First, the dark throat seemed narrower and more defined that the House’s necklace.  Secondly, the black mark on the ear was very telling.  This prompted an immediate run to the reference books.  Not wanting to be overconfident I sent a quick email to Ron for final confirmation…. and confirm he did.  You are admiring an Eurasian Tree Sparrow (love it love it love it).

In case you do not know Sparrows (but if you do, I could really use your help in the future), or not from the Midwest, this particular Sparrow has an extremely narrow range.  Lifting a description off of Ron “the amazingly small range of western Illinois from St. Louis to the Quad Cities overlapping a bit into Missouri and Iowa”.  Turns out Ron and I were able to shoot this bird on a recent trip to the Havana countryside for a special +1.  That highlight reel bird will be revealed in a – dare I say “epic” post in the future.  As a quick note, this species is an Old World Sparrow that was released into the St. Louis, Missouri, area in 1870.  Needless to say, but they haven’t branched that far out from their introduction range.

Did I mention Emiquon has Mallards?

Well, Emiquon has Mallards.  not much else to say about them that hasn’t already been mentioned in previous blogs.  Just thought it was a cute picture.

Even if you are not into birds, there is plenty of other wildlife to view at the national refuge.  Take, for example, this huge bullfrog.

How is that for Bullfrog in your face and I’m not talking about the sunscreen.  This one might make the fair rounds – the eye detail reflected nicely and the texture came out well – also tried to get down to water level to give that more intimate feeling.  Just worried it might freak the judges out and pass it over for deer having sex taken through a screen door (you might think that is an odd reference, but that came directly from a fair entry we were in competition with).

Lastly, I bring you a Muskrat.

These suckers are all over the place in Emiquon.  In fact, if you do not see one on your visit, be very worried.  It is likely they are hiding from you because they are planning to steal your car for a Muskrat joyride.  Not really educated on these creatures beyond the personally witnessed highly destructible tendency to drill holes in stream banks.  Sure, the greenies are all over humans that don’t treat the world to their standards but you don’t hear a peep out of them when the local wildlife are systematically destroy the environment – damn Muskrat lobbyists.

Well, time to go enjoy my quota victory in a cozy bed and a fluffy pillow.  See ya’ all next month!

4 thoughts on “Closing Out Emiquon in April”