Welcome back everyone!  As mentioned previously, this is dog show weekend so I have an unusual amount of extra downtime to crank out some posts.  Since this blog started as an observation on life I thought I’d begin with a funny experience from this morning.  I was standing in a pee zone (as I like to call it) waiting for my mother-in-law’s dog to get his business done before rejoining Linda inside the event building.  At the same time a lady gets in her car to exit the parking lot.  To better describe the setting, there were a number of cars parked in two rows – one row aligned with her and one behind her.  The lucky thing for her is she could have backed out straight, missed all cars behind her and been on the road in about 5 seconds.  Instead she cuts it sharp out of the space into the small lane between the rows.  Of course, that was too short for the vehicle so the next 2 minutes were spent inching out, turning, going forward, inching some more out, repeat a painful number of times.  From an observation perspective, that was entertaining, but the real reason I’m relaying this story is a lady came up behind me and quite loudly proceeds to ask; “Why didn’t she just back out?”,  “Why would she do that?”, “I’ll feel bad if she hits that car” (by that time the driver was less than a foot from another car).  Trying to aid in the situation I tried to give her a visual sign she had plenty of space to come forward and complete the final turn.  When I did that, the quizzical lady gets a stunned look on her face and goes “Tell me that’s not your wife!?!”  I hesitated because I was holding back a laugh she mistakenly took as a reluctance to say yes it is.  This prompted another hopeful plea that it wasn’t my wife.  I let her off the hook, but the look on her face when she realized that she may not have probably read the scenario was priceless.

Sorry for that long intro, but it’s nice to get back to my observation roots.  During the previous Crane post it was mentioned that there were other wildlife trips just waiting to get attention.  Before I can get to those I needed to finish up some pending posts like this one from Ft Myers. 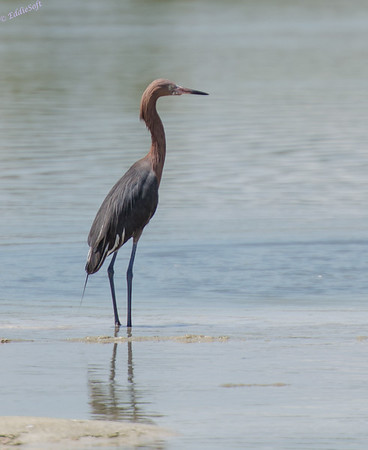 I’ve already jumped the gun a few times on the fruits of that quick Florida trip (link here, here and here).  Each of those posts produced +1’s for my Birding Life List.  Three new ones is always good for a trip, but the Ft. Myers Lagoon exceeded expectations. 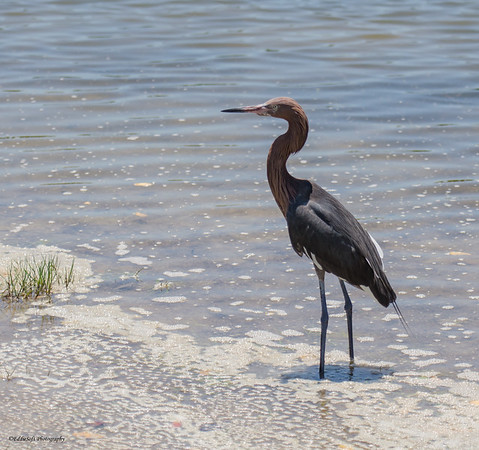 Hit the jump to see more about this bird… and maybe another surprise one!

My brother might be able to correct me if my recollection is wrong, but this might have been the very first bird we saw on the Lagoon.  It just flew up and landed 20 to 30 feet from where we were taking pictures of crabs.  What a great way to set the tone for the visit – +1 thank you very much. 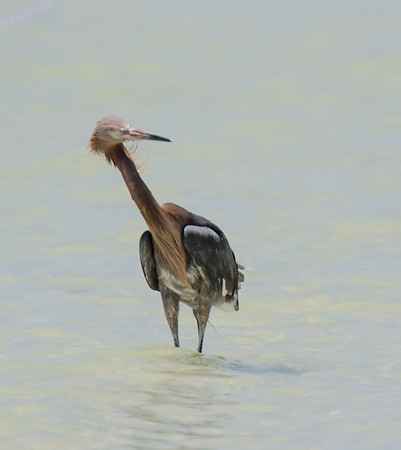 In case you are not familiar with your large shorebirds, this magnificent creature is a Reddish Egret.  The pinkish bill with the black tip pretty much gives it away.  The tell-tale reddish neck is the final giveaway.  They are medium to largish Heron that hangs out pretty much exclusively on the Southern coastline. 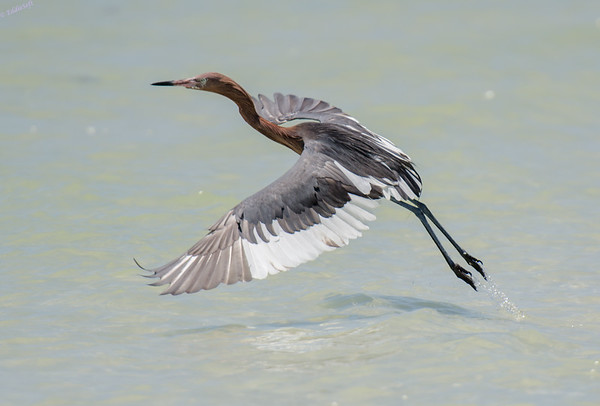 Based on this one’s behavior around us, I would add somewhat docile.  This may be due to the natural socialization with all the visitors to the lagoon – no matter the reason, this lack of jittery nerves made this specimen a perfect photography subject. 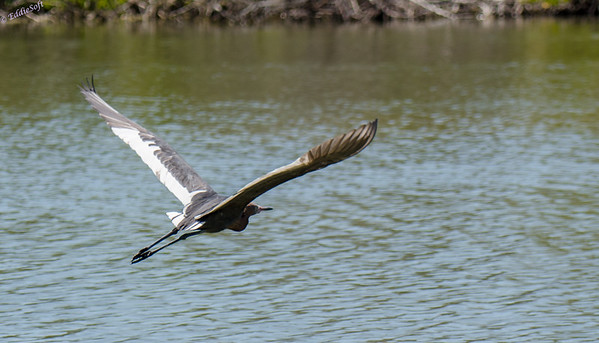 I didn’t know until looking it up on the Cornell site, but these Reddish Egrets also come in a white morph, looking very similar to your standard Snowy/Great Egrets.  Here is a good shot that shows it in comparison to those other Egrets.  It is slightly larger than these Snowies

If FOUR +1’s wasn’t enough to get the heart pumping, a FIFTH one was just icing on the cake.  The shot below was taken on my way back from a short venture on the backside of the lagoon.  A non-birder might incorrectly lump this particular Heron in with the Reddish one above. 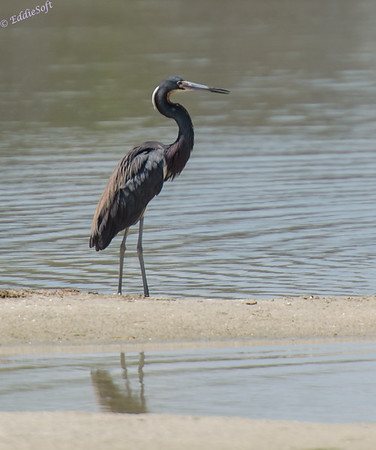 The white belly (which you can barely see in these shots) actually distinguishes it from the Little Blue Heron and the multicolor feathering attributes to the Tricolored moniker.  Like the Reddish, the Tricolored (or the Louisiana Heron as it used to be called) can be found primarily in the southern coastlines although it does come inland in the Central America regions. 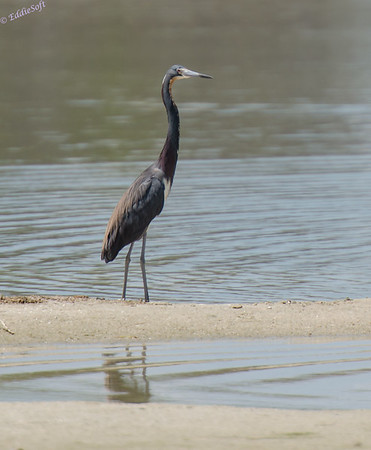 I am super stoked about the next shot.  Not so much from a gallery addition perspective because it would really just appeal to a small segment of customers (shore birders), but this shot has a very unique feature.  It actually has the Tricolored, the Reddish and the Snowy Egret all in the same frame.  Not only does it give a good coloring reference, it shows off the relative size of those particular birds. 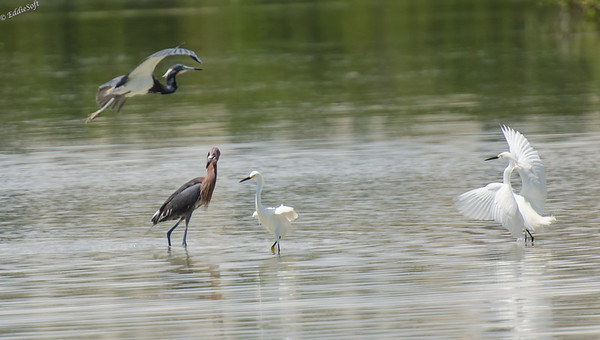 That’s all the pictures I have for this set!  I’ll take great pleasure in upping my NA Birding Life List count by two thanks to this single post.  Good thing seeing as how my brother Ron is racking up points left and right.  Not sure if he got the Tricolored one when he was down there with me, but he might have bagged it on a follow up trip he made.

Have a good one everyone – I see Raven has decided that he would rather visit with the onlookers on the other side of the ring than actually complete the current course – how embarrassing – unbeatable one minute, shiny squirrels the next.  This is when he becomes Linda’s dog.