Welcome to the new month!!  It took a little longer that last year.. and the year before that.. and the year before that, but we made it.  Yesterday was a gorgeous day here in the Midwest.  The mercury made it up to  the 63 mark which signals a great time to go birding! Although not feeling the best from a bad run the day before, I decided to head down to Emiquon and then caught Jubilee State Park on the way back.  Neither of those locations produced anything noteworthy.  The plan was to come back, process the shots and get them up on the Blog for your enjoyment.  Unfortunately, the tin was pretty thin so pulling out a birding trip to Jubilee from back on January 30th of this year.

The shot above is definitely my favorite of the set.  In truth, the lighting wasn’t that great forcing me to push the ISO up.  This caused a grain that ended up adding to the overall look of the scene.  It has that water color effect or even the look of a Japanese rice paper painting.  Can’t wait to get that one printed out.

Here’s another shot of the same Eastern Bluebird.

This Nuthatch was hanging out in the bottoms down by the Jubilee pond.  This area is usually a bog, but the cold January weather froze it up enough to traverse it without issue.

Hit the jump to see a few more shots from the hike.

Here it is demonstrating why it is called a Nuthatch.  In case you do not know, they store up food by placing it in crevasses for leaner times. 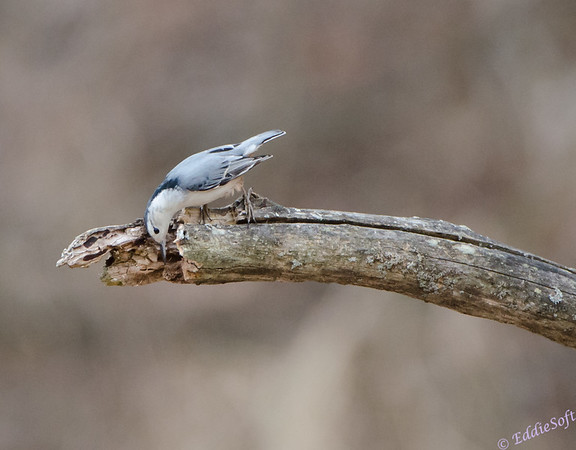 This Nuthatch cracked me up.  Some rude Woodpecker came up behind it and popped a balloon – scared the crap out of it.  The crazy Woodpeckers are always pulling that “Hunter sneaks up on unsuspecting bird” trick.  Quite the riot at bird bachelor parties.

Speaking of that devious Woodpecker, here’s the Red-Bellied that perpetrated the shorts changing incident above.  Bad Pecker… Very Bad Pecker 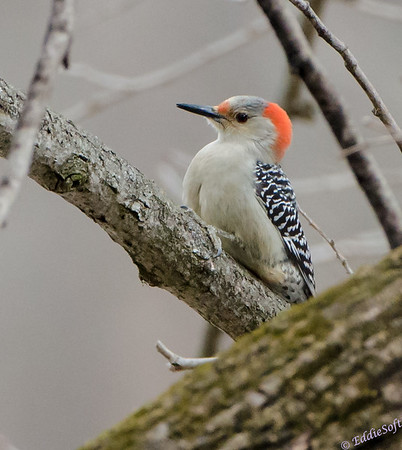 This female Downy was hanging out in my favorite area behind the tent area in the Jubilee Campground.  I keep meaning to take Linda to that place for a picnic – the view there is awesome as it sits on a high hill overlooking the convergence of Kickapoo Creek feeders.

Here’s the male version.  Note, to be honest, these could be Hairy’s based on the fact they are fairly large.  Just too hard to tell them apart and most of the time they are indeed Downies so just going with that for now.  Please correct me if you have a differing opinion.

This Finch took up a huge chunk of my SD card that day.  On the way back to my truck parked in the campgrounds, this bird flew past me and landed in some high branches.  This Finch was huge compared to the rest of the ones that feast on my feeders day in and day out.  My judgement was impaired by the excitement of possibly getting a Pine Siskin causing my shutter finger to go in overdrive.  Alas, the digital darkroom showed this to be a common American Goldfinch – a huge one, but one none the less.  The allusive Siskin will have to wait.

I was told by another birder there were no Turkey Vultures around here at this time of the year…. wrong. 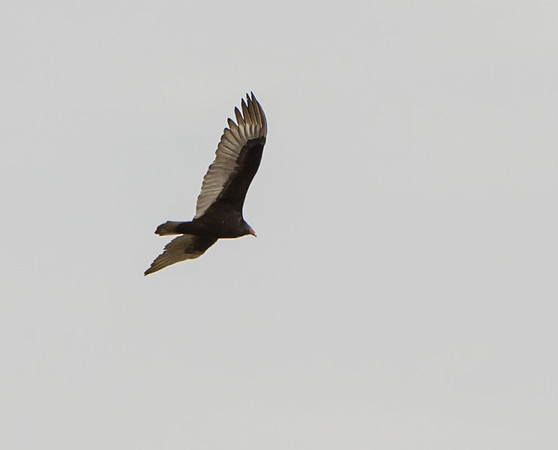 This Cooper’s Hawk was sitting in the trees just inside the Jubilee entrance.  It saw me park the truck in a pull-off across the field and kept an eye on me as I traversed the corn stalk covered field.  As soon as the Beast was pointed in its direction it launched for more tranquil settings.  Only got this quick snap to show for all the effort. 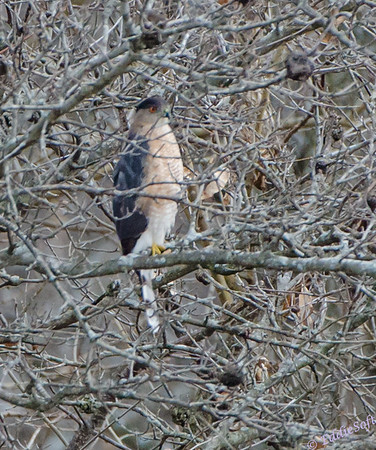 And there’s this frustration.  For 20 minutes I hunted a set of birds hanging out in the underbrush in the big meadow area.  Go to the left.. it went right.  Go to right .. it went left.  Get closer to the treeline and it buried itself in branches.  This the best shot of the entire 20 minutes – eesh!

All that work for a Sparrow – a White-Throated Sparrow.. but a Little Brown Jobber none the less.  If you thought that shot was bad, check out this craptastic shot.

Once again, this was taken in the frozen bog down from the Jubilee pond.  This Wren gave me a two second glimpse before it headed way off into the forest.  By instinct only, I was able to point and shoot the Beast with zero concern for settings or focus.  The fact you can tell it is a bird and not a clump of dirt is a miracle.  Pretty sure this is a Winter Wren – it is a new bird for me .. but here’s a secret… I have better pictures in an upcoming post.

Now for something completely different! 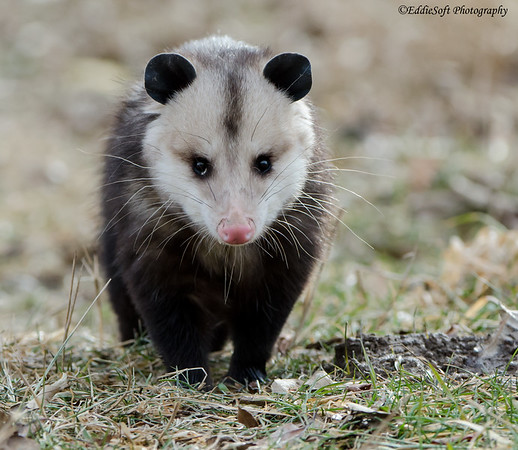 I love that shot by the way for a couple of reason.  The obvious being I nailed the manual settings.  The other less obvious reason is this captures a true wildlife emotion.  This Opossum was spotted hunting in a field right outside the park’s boundaries in the back part of the campgrounds.  There’s a small trail near there I was planning to explore, so took up a position that would intersect its current path.  Sure enough it continued nose to ground to within 15 feet of where I was kneeling.  A bit of panic came over remembering how wicked those teeth are from a previous encounter.  Decided 5 yards was close enough so made a small sound to get its attention.  That look represents the exact moment it recognized I was there!  If looks could kill….

Here’s another shot of the fur ball with deadly teeth coming up to the intersection point.  At this point we were a safe distance away.  It turned left and came right at me – attention totally on the ground – not surprising since I was the ONLY one in the park that day.

That was the reason the 15 feet from death caused additional levels of concern.  Imagine how weird it would be for the Park Ranger to come upon a shredded bloody mess of a body with a nice camera sitting in the goopy remains.

Shudder – with that horrifying thought I put a close on this post – hope you enjoyed the fruits my fun walk in the park.

5 thoughts on “A Walk In The Woods: Jubilee”